I spent a good part of my day yesterday at the Detroit River Hawk Watch. All in all, it was a fine day. Over 6,000 Turkey Vultures were recorded, plus I saw my first Rough-legged Hawk of the season. A highlight of the day was seeing not one, not two, but four Golden Eagles in a single field of view. Yes, a kettle of Golden Eagles! Sure that was cool, but something else topped off my day. 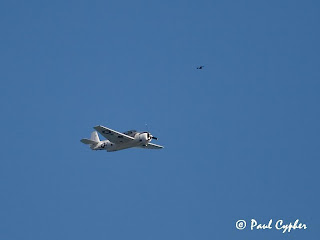 I saw a Pregnant Beast.

The Avenger was a United States Navy torpedo bomber that the replaced the hardly devastating Devastator during the first year of World War II. It saw service in the military for decades after the war.

When first introduced in 1938, the Douglas TBD Devastator was in impressive machine. The first all-metal, low-wing aircraft in the Navy, it had a cruising speed of 128 mph. Many felt it could effectively deliver the 1,000 pound torpedo slung under its belly.

Unfortunately, by the time hostilities broke out in 1941, it was an obsolete piece of trash. By comparison, the Japanese torpedo bomber, codenamed "Kate" by the Allies had a top speed of 235 mph with a 1,700 pound payload. Basically, it was a plane that flew twice as fast and could deliver almost twice as much damage.

The short-comings of the Devastators became horribly apparent during the Battle of Midway in early June, 1942. The sad story of Torpedo Squadron 8 from the USS Hornet illustrates the frustration of war when good men are sent into combat with bad equipment. The slow, under-armed tubs where cut to pieces with ease by Zeros, the superior Japanese fighter. All 15 planes , with two crew each, were lost. One man survived. (He happened to have a front row seat for the destruction of the backbone of the Japanese Navy, but that is a story for another time.)

While a few Avengers were involved at Midway, most aircraft carriers did not carry a full compliment until later in 1942.

What a difference a good plane can make.

With a maximum speed of over 270mph, it could carry a one ton torpedo or 1 ton of bombs in an internal bomb bay. Later modifications allowed for rockets under the wings. The crew of three consisted of a pilot, turret gunner and bombardier. In my photo, you can't see the turret, but you'll notice how the belly of the plane has a peculiar "kink" in it. That location accommodated a .50 caliber machine gun (sometimes referred to as a "stinger") that was used by the bombardier when he was not using the radio or getting ready for the bomb run. Overall, the plane's versatility allowed it to be used in anti-submarine warfare and as a airborne radar station. It's large fuselage could accommodate the now primitive vacuum tubes found in early radar systems. Can you see now why it is called a "Pregnant Beast"? Look at that big belly!

George H. W. Bush, the future American president, was an TBF Avenger pilot. He received a Distinguish Flying Cross for bravely releasing his payload before crashing down in enemy territory on 2 Sep 1944. Apparently, Paul Newman was a turret gunner in the later stages of the war.

It was a flight of Avengers, the now famous Flight 19, that was lost in the Bermuda Triangle during 1945. Oh, the mystery of it all. Not really. They got lost and crashed. Mystery solved.

Almost 10,000 were built, with General Motors taking over the bulk of production from Grumman. 42 are still air worthy.