Black.  Hmmmm. What can I say about "black".
Well, it can be good or bad, right?
For example, a budget operating "in the black" would be good.  A budget "in the red" would be, of course, bad news.  Just ask Greece.
How about your little toe turning black after you accidentally smashed it into the dresser.  Bad. For sure.  (I did that once.  Damn......)
How about teacher comments in black ink?  I would consider that good.  We all know red ink isn't such a nice thing to see on a term paper you were working on for weeks...
Big, nasty black blisters (preceded by headache, fever, chills, and vomiting) that eventually break and ooze pus and blood?  Bad bad bad.  That means you are likely suffering from Bubonic Plague and you're gonna die.
Blackbirds.  Well, that depends.  Hundreds of European Starlings in your yard might be a drag.  But what about a Tri-colored Blackbird in Washington? That would be WAY COOL, especially if it happens to me in a few weeks!
So you get it now, I hope. Black. Good or bad. It could go either way depending on the circumstances.
Juniper Black Ale (#1,013) from the Sierra Nevada Brewing Company? 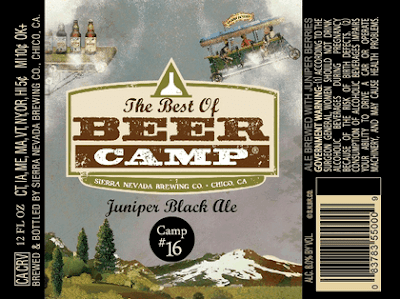 Bad.
Things certainly started okay.  It poured nice (black, as you might guess) and looked nice.  That head was way cool, too; foamy, two fingers thick, and a nice lacing as it dwindled over minutes.  The roasted tones on the aroma were pretty fair, too.  But something was in there that I could not quite grab. It was hiding behind the chocolate.
Once on the tongue, it fell apart.  Completely.  The acidic bitterness I was struggling with on the nose was in my face.  Juniper berries according to the brewer. I would argue that they chopped down the whole damned tree and stuffed it into the kettle. The piney resin-like tones were waaaaay too strong.  The finish was a massive dogfight between roasted malts, pine sap, and coffee.
Don't get me wrong. Juniper can have a place in beer.  Just not this one.  1 out of 5.  The folks at BeerAdvocate.com gave it a "B+". I am not sure how that is possible.
This is one of the saddest beers I have had in long time.  Fortunately, I did not get a six-pack.  It was in sampler 12-pack: three bottles of four beers each.
Posted by Paul at 9:59 PM No comments:

Goofy burger combos are starting to become just as fun for me as goofy pizzas. With friends and family, I gave another burger recipe a go using Mastering the Grill.
I won't give all the details away, but it goes something like this. Grill and wedged pear and onion. Chop 'em up and mix with fresh sage. Make 8 turkey burger patties (with good stuff mixed added including apple butter). Pile the pear/onion mix on one patty and make a "patty sandwich". Grill it and serve on a "upscale" burger bun.

Damn good.
I mean DAMN good. The apple butter really adds a nice sweetness, too.
Add grilled squash and a simple rice dish and you have a quite a meal. 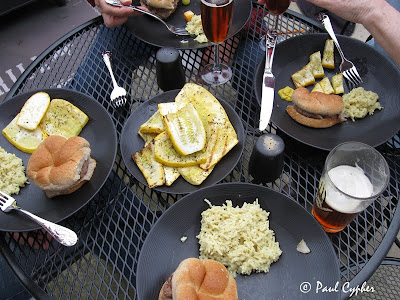 Sadly, the beer did not live up to my hopes. The Drifter Pale Ale (#1,008) from Widmer Brothers was a bit of a let-down. The slight off-white head which was a bit thin, but not a big deal. The hop aroma was subtle - very subtle. Any hoppiness on the palate fell away pretty quickly leaving you kinda disappointed. I fall short of saying "dull" but the beer was almost lifeless. 2 out of 5.

Today, after getting home from work, I flopped on the couch to watch the news a bit. I was struck by a sad story.

The Liberty Belle is gone.

Sadly, the Belle crashed today in Illinois.  Apparently, a fire was reported shortly after take-off.  Reports suggest that all seven crew got off safely.  A video can be seen here.

I rummaged through my photos of the Thunder Over Michigan airshow from last year.   She was there.

While the first one is "recycled" from the original blog entry (that's her in the front), the others are from my "archives" (I don't know what else to call 'em). 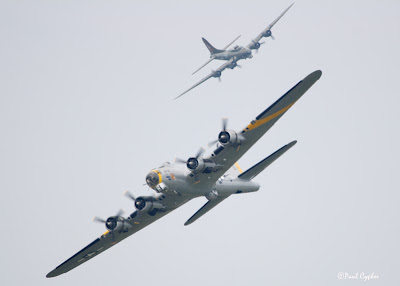 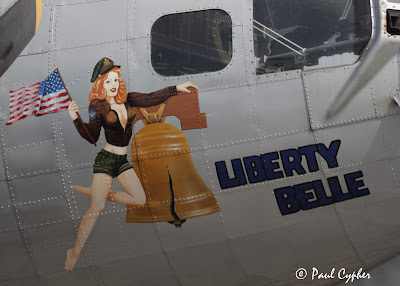 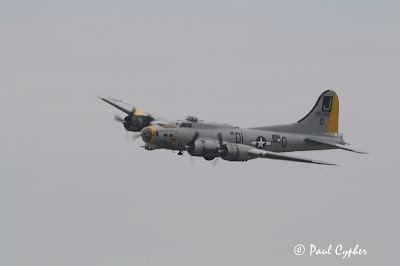 Another historic piece of our country's war past is now gone.
Sad.
Posted by Paul at 8:31 PM No comments:

During the last Fourth Of July, I grabbed my camera rig and took my first real set of fireworks photos.
A few nights back, Grosse Ile was having their "Island Fest" (or whatever they call it!).  You know how these go -carnies, ferris wheels, teenagers trying to be cool, bands with bad singers, 65 year olds wishing they were still teenagers, and the like.
This particular event had fireworks. So, I thought I would give the old "Oooh and Ahhhh!" show a go...again.
It was quite different.
While these fireworks were not going off in my hand or lap, they might as well have been. We were pretty close.  So close, in fact, I could not just set up the camera and worry about the exposure. I was constantly moving the camera in an attempt to compose the images the way I wanted them. Back and forth all night as the shells arced left and then right.  That got a bit old.
Plus, there was not a chance to work in a steady background. No city lights. No reflections in the water.  Just black sky and fireworks.
Not that just black sky and fireworks is a bad  thing..... 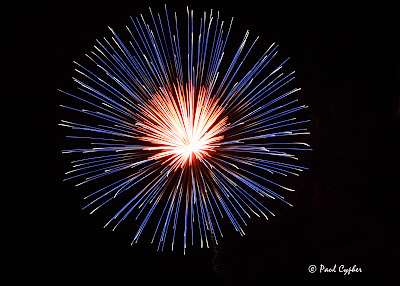 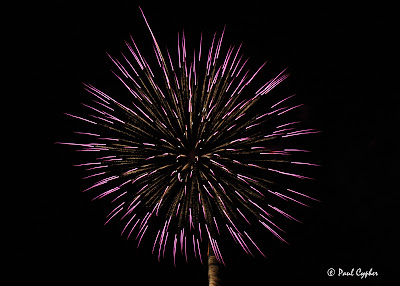 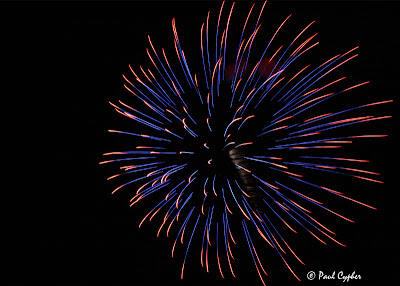