Walks on the Trapper's Run Nature Trail at Lake Erie Metropark can be very relaxing.  Strolling the one-mile loop dozens of times during spring and fall migrations, with binoculars and a camera in hand, can always turn up the unexpected.
As you might suspect, you can also turn up the expected.
Take this fellow, for example. 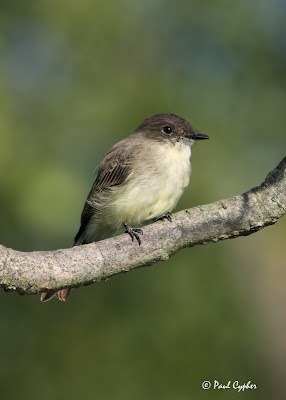 An Eastern Phoebe (PHEE-bee) seems to greet me every time I'm out.  I know right where to look.  The overlooks are best; either the Wyman's Canal or Eagle's Way.
Admittedly, I can't be sure if it is a boy or girl, but I certainly believe it to be one of the pair that nests under the overlook.  So realistically, I am not seeing one bird, but two.
In any case, it doesn't seem to perch on the railings when I'm around, but I'm sure he does when I'm not.  Twigs.  Little stalks of marsh plants. They all work.
A few days ago, I found myself actually saying aloud "Where's my Phoebe?" Not "a" Phoebe or "the" phoebe. MY phoebe.
A quick look of some expected perches turned up nothing.  Before I left the Wyman's Canal Overlook, I glanced to my left, and there he sat.  Only feet away.
My first reaction was to freeze.  After a long moment or two, I realized he seemed to be pretty content.  Slowly raising my camera, I snapped a shot. Then one more.  One more yet.  34 shots later (seriously), I left him to his preening.
I can say with certainty I have never been so close to a Phoebe for so long.  Birders, sad to say, sometimes over look the more common birds.  Such a shame.
Officially a Flycatcher, Phoebes are butt-kickers.  Any flying insect, be it dragonfly, damselfly, beetle, wasp, etc., is in serious trouble if they think they can fly near a hungry Phoebe and get away with it.  There habit of zipping out to grab the critter and then returning to the same perch, called flycatching.  Hmmm...flycatching is done by flycatchers.  How easy is that to remember? In some cases, the forceful closure of the bill can be heard!  That "snap!" is really quite something!
Please don't think I am being arrogant by calling these Phoebes mine. I just enjoy seeing them.  Like so many other birds, they return to the same locations year after year. This is at least my third season with this pair.
In fact, some time ago there was a fellow who was pretty certain he had the same Phoebe returning to his property, too.  After capturing it, he tied a piece of silvered thread around the leg and released the little bird unharmed.  The following spring, the bird, with thread intact, returned.  John James Audubon holds the distinction of banding the first North American bird.
So I hope to walk Trapper's Run a few more times before songbird migration winds down. Phoebes are actually quite tough and will hold out well into the fall or even early winter. For that matter, some stick around during mild winters (they shift their diet from insects to berries).
I fully expect to see my bird(s) in the coming weeks.  Winter?   We'll see.
But, in any case, I will be looking for my phoebes by late March.   I suspect the Eagle's Way Overlook will be the place.
Posted by Paul at 8:53 PM No comments:

Perhaps you saw this picture a few days back... 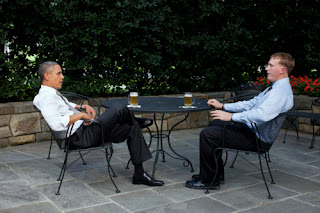 If you are anything like me, you noticed a few things.   First, the White House buys patio furniture at the grocery store.  Cripe, I have patio furniture almost exactly like that and I DONT have a multi-trillion dollar budget!  Two, "Commander in Chief" can also mean "Casual in Chief."   (Fine by me. Seriously.).
Third, and most important, two guys are havin' a beer. Nice. The guy on the right is a Congressional Medal of Honor winner.
"What kind?", you may ask?  I was wondering the instant I saw the photo.  I thought perhaps it was from Goose Island Brewing Company. The President has been know to have beers from there.   Now we know.
Apparently, it is called the White House Honey Ale and was brewed with equipment purchased by the Obamas.  Historians say it is the first beer brewed in the White House.
You may be confused by that last line. Don't be.  Yes, George Washington was a brewer, but he did not live in the White House.  John Adams was the first.
Needless to say, I have placed my order for a bottle.
I have yet to hear back from the President.
Posted by Paul at 7:10 PM No comments:

Yup, it is true. Vampires exist.  We knew it a couple of years ago.  More evidence has come to light.

Cage must be a good vampire.  If not, Old Abe would have lopped his head off. 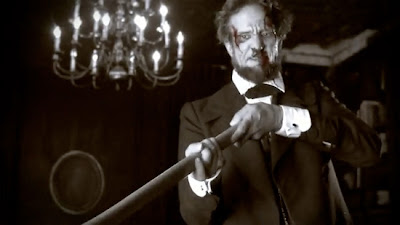 Time to babble now.
If you saw my post from yesterday, you knew I was at the Black Lotus Brewing Company.  For no particular reason, it seemed like a neat place to go.  I had not been there and, as always, have an interest in new beer.

As you may have read, I was concerned about the beer quality vs. traffic.  Long drives for crappy beer would be, I suspect, about as much fun as pruning shears in your head.  Fortunately, the beer was good...for the most part.
The Oktoberfest (#1,088) was, hands down, the weakest of the four.  Sure, the amber color was nice, but it was downhill after that.  The sweet, caramel tones on the tongue were "eh" at best and it was, in my opinion, kinda flat.  I am really not sure what to make of it.  Needs work as far as I am concerned.  Two out of five.
World Wide Wheat (#1,089) and Blazin' ESB (#1,090) were both much better.  The wheat, with a standard visual profile, had excellent character of aroma.  I would have liked a bit more banana in there as the cloves were a bit higher, but I'm being picky.  On the tongue? Nice.  Very well done.  Four out of five.
The same can be said for the ESB.  Beautiful gold tones. Fair lacing on the glass.  The alcohol, hops and malts tones were in perfect balance through out.  It was also had a wonderfully smooth and creamy body.  Damn good stuff.  Five out of five.
The Black Bottom Oatmeal Stout (#1,091) was average with no surprises.  Roasty on the nose (quite powerful, actually).  Dry finish.  I think it could have been a bit thicker, but it was not bad. (It should also be noted that the photo from yesterday gives the Stout what appears to be a yellow head.  NO. I am not sure what to make of it.  It was not that yellow in real life. It was a pleasant tan, as it should be for stout.  The yellow must be an artifact of the photo. I have no other explanation.)
The food menu, however, was a bit lacking. Don't get me wrong. My turkey burger with Blue cheese and onions was excellent as was the Hummus appetizer. But, if you don't like burgers or sandwiches, you are pretty much sunk here.  No chickens. No pastas or pizzas.  Nothing like that.
All in all, the feel of the place was quite nice. Dark.  Copper-topped tables (COOL!).  A small stage.  Neat art.  If I lived in Clawson, I would certainly get there more often.
But what could be the coolest part of the evening, was not the place, but the people. 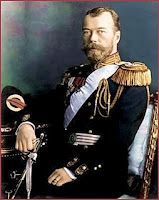 One fellow was, I swear, Nicholas II of Russia. I have no doubt.  The facial hair. The eyes.  The posture.  I am certain. History has him, and his family, getting gunned down and stabbed by the Bolsheviks in 1918.  I say crap.  He lived and was having a beer in Clawson just last night.  Scientists supposedly pulled his acid-pocked bones from a ditch a few years back and confirmed the bones were his using DNA analysis.  Nope.  Somebody botched the test.  The fact that he would be 143 years old today is not the point.  It was him.  I think it was very clever on his part to ditch the fancy early-20th century clothes for something more modern.
Buy me a beer some day and I will tell you about the one-legged Santa Claus....
Posted by Paul at 9:21 PM No comments:

I'm on site at the Black Lotus Brewing Company in Clawson. Hopefully, the beer is better than the traffic getting here!