Imagine, if you will, men on horseback with lances and swords.  Perhaps you would be thinking of a medieval knight minus the armor.  Now imagine them in a mass, 600 strong,  racing across one mile of open field towards the enemy.  Imagine now that the enemy does not rise to meet them with more lances and swords.

If this sounds appalling to you, welcome to Crimean War.  Fought during the 1850s in places would that include modern-day Turkey, the Russians lost to an alliance between France, Britain and the Ottoman Empire.  This war and the American-Mexican War, fought during the previous decade, set the tone for tactics used during the American Civil War (fought in 1860s).

One chapter that stands out is the Battle of Balaclava. Fought on October 25th, 1854, it is one of those days in the annals of military history where students of tactics sit back in their chair...pause....and say "Ugh...".

With the town of Balaclava secured by the British and French, the Russians were concerned as their nearby naval fleet in fortress of Sevastopol was in jeopardy.  The British and French needed to dislodge the advancing Russians who had managed to entrench dozens of cannons in the surround terrain.

All in all, things went well for the allied troops. They succeeded in forcing most of the Russians back.  Tactics of the time suggested that light cavalry would advance quickly and destroy the retreating enemy and perhaps even capture cannons.

During a series of communication gaffs, the Light Brigade, comprising over 600 men, was sent to attack the wrong artillery unit.  Instead of harassing and killing retreating enemy troops, they were "ordered" to advance across one mile of open ground straight in to the face of an entrenched artillery unit that had not broken. To make matters worse, the Russian artillery units were still in place on either side of the British advance.  Taking fire from three sides in a region now known as the Valley of Death, casualties were high.  One in three riders was killed or wounded - devastating losses by any standard.

Immortalized in a poem by Alfred, Lord Tennyson, the Charge of the Light Brigade stands today as a textbook example of bad communication, poor intelligence, and pouty officers leading to a huge loss of life. 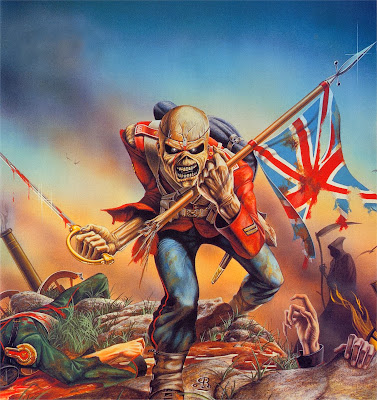 Known to heavy metal fans around the world, Eddie is the mascot of Iron Maiden - one of the greatest heavy metal bands of all time.  Always featured on their albums, fans are as interested in the artwork as they are the music.  From lobotomized lunatics to ancient Egyptian rulers to Battle of Britain pilots to space cowboy robots that make Clint Eastwood look like a Boy Scout, Eddie is "the" image of Iron Maiden.

Track 5 of 1983's  Piece of Mind album is "The Trooper".  With "first person" lyrics referencing bugles, muskets, Russians, and horses, one might think the songwriter/bass player Steve Harris was dreaming.  It turns out the galloping bass line is perfect for what was his musical interpretation of The Charge of the Light Brigade.  The artwork shown above is from the single and highlights Eddie, saber in hand, on the battlefields of Balaclava.

I recently secured a bottle of Trooper (#1,519) .  Brewed by a cooperative agreement between Bruce Dickinson (Iron Maiden's vocalist) and the Robinsons Family Brewers, this beer, officially a "strong bitter",  has apparently been flying of the shelves.

In my pint glass, it poured a very beautiful gold-pushing-copper hue.  For a few minutes, the head (easily 3/4" of off-white foam) stayed in place. Clear as a clear can be, the beer really looked nice. Malty tones (almost like bread) with a tad of citrus notes made up the bulk of the aroma.  Once on the tongue, I confirmed the body was what I suspected during the pour - light.  Maybe one could argue a step down from medium.  Hops, including Golding and Cascade, were solid on the finish but not in an American IPA sort of way.  It seems much more in balance with the malt tones (showing yet again that the "strong bitter" title of the beer is not necessarily indicative of its taste).  Lacing was non-existent and the carbonation seemed pretty light.

The rider who narrates the song gets shot.  Part of the the final verse reads:

And as I lay there gazing at the sky
My body's numb and my throat is dry.

I would argue that a time-traveling beer snob could bring a bottle of The Trooper to a trooper from the Light Brigade and said trooper would enjoy it.  Drinkable, light-ish and refreshing, a mangled soldier with an antiquated weapon would have no room to complain.  The "dry throat" would certainly go away. They might even ask for another one.  (This would be in contrast to the offer of a Budweiser - I'm sure he'd rather die...).

Me? Nah. One is plenty.  Overall, the tones suggest a beer that is staggeringly average: 3 out of 5.    There are lots of beers in the beer world. I've had my Trooper. Been there done that.  On to the next one.....

I received an email today.  While not its entirety, you get the idea.....

Paul,
I'm pleased to tell you that you have been admitted to the Historic Preservation Program for the Winter 2014 term.  You will receive an official letter from the University within the next couple weeks, but we wanted you to know right away. That letter will have your student number and PIN #; you will need these in order to register for classes.

Welcome to the program!

Yup, it's official.  I am officially a graduate student at Eastern Michigan University where I will be pursuing a Master's Degree in Historic Preservation.

I bought new clothes and my mom will drop me off at the bus stop.  Do you think I can fit a craft beer in my Transformers lunchbox? 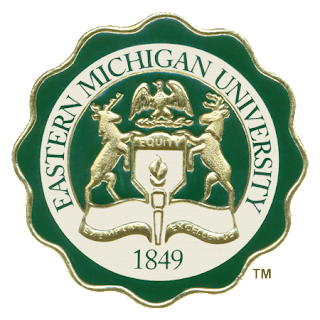 My, what a difference a year can make.  Last year's Thanksgiving Day Parade was quite balmy.  All in all, it was the perfect weather for a parade.

This year?  Bone chilling cold.  Snow.  Fortunately, there was no wind.  In any case, with a camera condom in place, photos were to be had...

Yeah, this is not quite what I would call a clown mask, but it is still pretty damned cool.  I have to think that there is a strong influence from the old bird masks from the Black Death times.

Licking snow.  This is required behavior during the early snowfalls of the season.  (This is not to be confused with licking a frozen flagpole. That is very different and very dangerous.)

A little Photoshop fun can make an crisp image of an old car on a new street (Woodward) look old again.   This is probably my favorite image of the day.

A clown. In this case, my soon-to-be mother-in-law, Sue.

Apparently, the outfits worn by the clowns are color-coded by years of service.  As one progresses through the years, they are allowed to modify their outfit.  Note the blue cape on the fellow in picture below.  He  has been in the parade for at least 25 years.  His cape says so. Sue, on the other hand, has an outfit that is literally half white.  That denotes less than 5 year of service.

It is also worth noting that clowns normally give $1,000 each year to do this, but the money cant buy you the colors.  We were told a story of fellow who wanted to wear the blue cape but did not have the time accrued. He was prepared to cut a $25,000 check so he could do it in his first year. The Parade Company rejected the offer....

Physics caused a bit of trouble with the balloons.  Some seemed a bit wrinkly and saggy.  Gay-Lussac's law, or the pressure law, was found by Joseph Louis Gay-Lussac in 1809. It states that the pressure exerted on the sides of a container by an ideal gas of fixed volume is proportional to its temperature.  In other words, the balloons deflated because it was cold.  Ahhhhh, real-life applications of science. Dontcha love it?

Many were just a few feet of the ground.  The result?  Uncle Sam looked like he was literally walking down Woodward.