Sure, I'm in Graduate School. Sure, I have rocked most of my papers and other assignments.  Sure, I'm busy with life in general....

...but I always have time for a beer.

Imagine my surprise when I went to the Vreeland Market to return some bottles a few days ago.  There, stacked neatly with cases of other goodies, I found this beer... 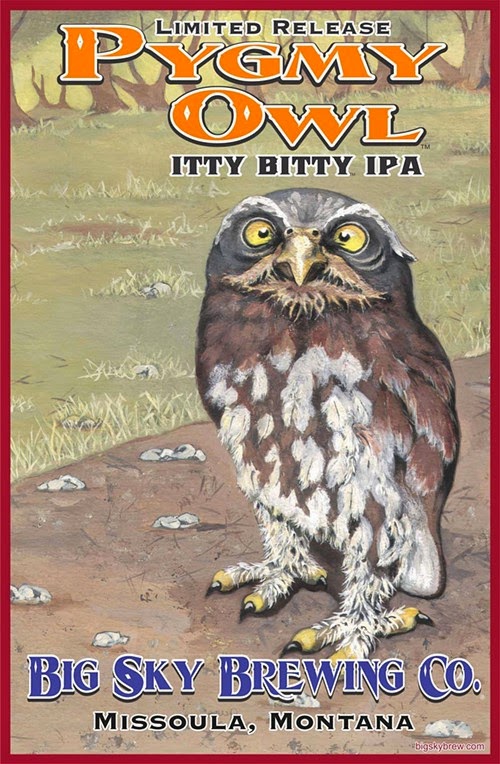 Now, I suspect I know what some of you are thinking.  "What a dumb name..." or "How stupid..."  Some of you might be thinking "Oh cool! It's a bird label for Natalie's collection of beer bottles with birds labels!"

Here's the kicker - it's  a real bird.  Well, sort of. Sure, the bird looks a bit more like a Burrowing Owl than it does a Northern Pygmy-Owl, but whatever.  Its a neat name with neat label from the folks at Big Sky Brewing Company.

Rocky Mountain National Park. I was taking the Trail Ridge Road to the top of the park at sunrise in my quest for White-tailed Ptarmigan.   Stunned by the beauty of the place, I pulled over at the Rainbow Curve Overlook.  Standing on the edge, I just stood in awe.

The "whoosh" sound came from behind my right shoulder. I would gather the source was no more than 24" from my head.  Before I could even turn to identify what the hell it was, the blur was already heading down the mountain in front of me. With my bins to my face as fast as I could muster, I watched as this Blue Jay -sized brown bird swept down the mountain.  It wasn't flying straight like a bullet. It was more like a bounding flight, similar to a goldfinch.  Now and then, the wings would blur as it pumped for speed.

If you recall as a kid throwing pebbles or what not into ponds or creeks, you might remember just standing there watching them go deeper  until you couldn't see them anymore. This was the same effect - it bounded its way down the mountain until I lost sight of it.  Fascinating.  Hypnotizing really.

Northern Pygmy-Owl.  I guarantee it. No other bird in North America looks like that, moves like that or can be found in Rocky Mountain National Park.  I snitched this image below from Wikipedia. 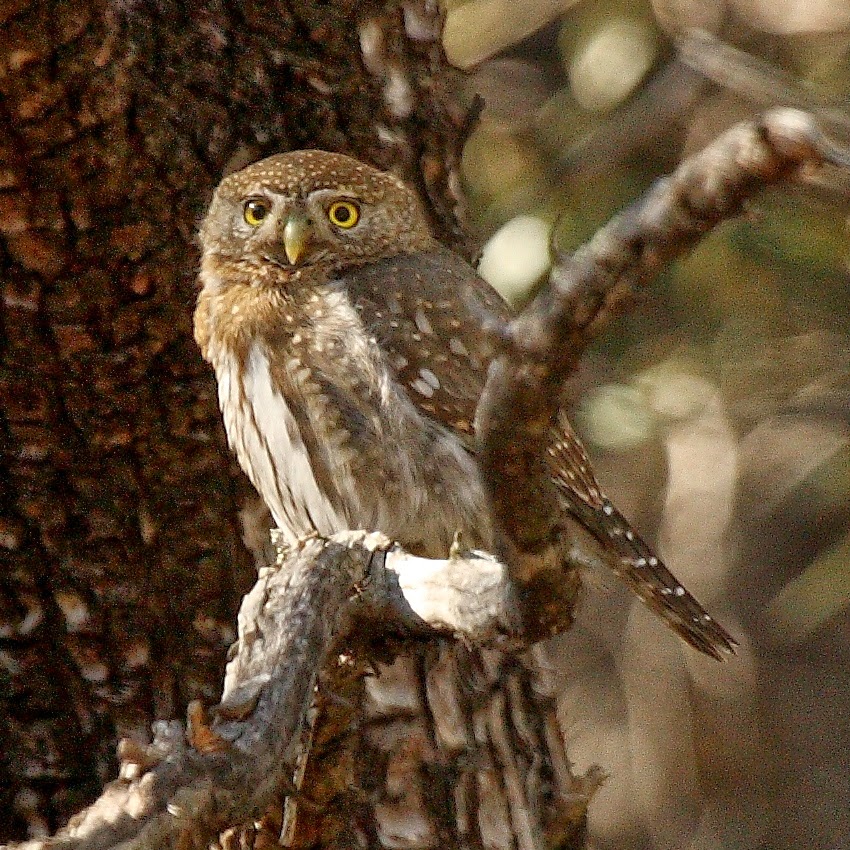 At this point, some of you might be ready to call me out as a liar.  Maybe you are thinking that I have had one too many of these 4.2%  alcohol beers as I write this passage.  Perhaps you're thinking that owls fly silently and that, like compulsive liars, I have gaffed my story and you caught me red-handed."There is no WAY he heard an owl......."

It turns out the the Northern Pygmy-Owl hunts during the daylight hours.  Evolutionarily speaking, there is no advantage to silent flight during the day so predatory birds hunting between sunrise and sunset don't fly silently.  Think about it -what is the advantage of silent flight when the prey can see  you coming?  On the flip side, if it's dark out, prey can't see you coming, but if they can hear you coming, they can escape you.  If you are silent in the dark, they'll never know what hit 'em. Makes perfect sense.....

But, now the big question - how is the beer?! Just fine, by my standards.  Yellow.  Crystal clear with a short-lived white,foamy head.  Don't let the name mislead you - sure it is "Itty Bitty", but the hops are plenty strong on both the nose and palate.  Yes, it was  a bit light-bodied, but you would expect that with session IPAs.  Are traditional IPAs better? You bet. But don't let that stop from you buying it...

(Don't, by the way, ask me where this beer falls on my list. I have not totaled it in months.  My notes are currently voice memos on my phone.  I've been backed up with school and all.  I'll get them into the spreadsheet at some point!)
Posted by Paul at 8:07 PM No comments: