When all is said and done, I truly have interests beyond birds and beer. History can be pretty cool, too. So, it was with great joy that I found myself at the local party store looking at a six-pack of beer that had an images of both Mad Anthony Wayne and a masted sailing ship. The six-pack featured 3 different beers from the Erie Brewing Company based in Erie, Pennsylvania. (I really like these sample packs. I get a chance to see what a brewery has to offer and I can get more new beers in one purchase.)
The US Government chose Presque Isle to build a fleet of ships during the war of 1812 because it formed the only protected harbor on Lake Erie. In 1813, during the battle of Lake Erie, Commodore Oliver Hazard Perry successfully defended Lake Erie against the British with ships that were built on Presque Isle Bay, making a significant mark on the pages of history.

So, feeling myself in "history mode", I gave the Presque Isle Pilsner a go. 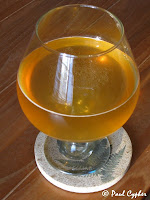 The pour into the snifter glass was fine and all (I did not goof it as I have been know to do now and then). While the beer itself is a spectacular straw yellow, the head did not last long. A few bubbles on the glass remained. No real lacing or sheeting. The aroma for me was unmistakable: apples. Yes, apples. Not a "bowl you over" sort of smell, but it was there (at least to my nose). My first thought was "Wow! This is starting off really well."

The body was light (like I would expect with pilsner), while the malty palate was, at best, fair. I thought the carbonation was off, too. By the time I finished the beer, it was almost flat. The finish was all wrong. It struck me as being a bit bitter. Not hoppy bitter, mind you, but certainly bitter. But, at the same time, believe it or not, there was a watered down feel. Watered down bitterness. That is just not good....

All that said, I wandered over to BeerAdvocate.com (after I rated it on my own) and people were not overly excited there either. Out of 54 reviews, it averaged a C+. In fact, a few were pretty ruthless: one fellow described it as "a sorry excuse for a craft beer" while another guy called it pure...well, you get the point.
Posted by Paul at 7:55 PM