With my new semester starting in less than a  week, Natalie and I wanted to take a day and have fun.  With plenty of options on the table, we opted for a trip to the Detroit Zoo.

Always a fun day, I couldn't help but to be struck by the rhinoceros. Such a somber beast. 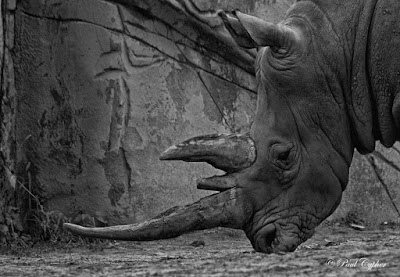 Lets take a minute and clear that up.  The Rhinos don't care what a subspecies is. That is science-y stuff.  They care about getting food, water and making baby rhinos.  Before, I even try and describe the concept, know this - scientists are ready to discard it as it relates to these two gentle beasts.  In short, they are likely two completely different species.

And one of them is nearly extinct.

With perhaps 20,000 individuals in the wild, the case for the Southern White Rhino looks solid for the time being.

The Northern White Rhino is done.  It is only  a matter of time.  Sudan, Najin and Fatu are all that remain.  Genetics and health work against them.  Sudan, who is thought to be 42 years old is the planet’s last male. He, in the modern vernacular, is "shooting blanks."   Even in the prime of his reproductive health, it would not matter as Najin is his 26-year-old daughter.  Even if a different healthy male were available, she has leg injuries, which means that she can no longer bear the weight of pregnancy or that of a mounting male.  Fatu, the daughter of Najin (and therefore the grand-daughter of Sudan) has a uterine disorder that prevents an embryo from being successfully implanted.

So how did they get here?

Made of keratin, the same component of our fingernails and hair, the horn is severed from the dead animal and used as medicine in southeast Asia.  Fever, rheumatism, gout, snakebites, hallucinations, typhoid, headaches, carbuncles, vomiting, food poisoning, and “devil possession” are all treated.  And none of this matters as science has shown it doesn't work.

Yes, it's true.  Entire poaching syndicates (who risk confrontation with guards who have orders to shoot them on sight) using some of the most amazing technologies available hunt down and kill an animal to scare away ghosts and goblins.   A horrifying trend in Vietnam is to add ground horn to water and drink it to cure a hangover.  I wish I was just making that up, but I'm not.

Looking back at my photo, I can only imagine how much money that horn is worth.

But what is a species worth?

Apparently, the aphrodisiac story does not hold.  Well, at least it didn't, but it does now.  Per Save the Rhino,  rhino horn was never really prescribed as a medicine for the sexually weak. (You're confusing that with Tiger Penis...which also doesn't work.) Western media have quoted this sexual side-effect so often the Vietnamese now believe it.

It is worth mentioning, too, that this ecological horror story is fueled by poaching, not hunting.  I suspect someone might be screaming "Yeah, but that dentist shot that lion...!" He did, yes, but investigations found that he thought he was doing everything by the  book and his guides basically bamboozled him.

Further, where is the outrage and anger every time a Rhinoceros is shot?  Why don't people get upset with that?  Or, for that matter, how about when a person gets shot!

Sadly, this will mark yet another time in history where the moment of a species' extinction will be known.  This is not always the case.  The Wake Island Rail was lost forever during the Japanese occupation of the island during World War II.  The year is not even known.  Island-hopping strategies by the Allied Forces functionally isolated the island from receiving supplies. The tame fist-sized bird never stood a chance as the Japanese struggled for food.  The year of loss would be anybody's guess between 1942 and 1945.

The loss of Nola a few months back made international headlines.  You can bet when these three pass, you'll hear all about it. We'll know the loss of the last animal down to the minute.  I suspect there will be outrage and sadness for a short time and then people will get back to their lives and pay attention to things that largely don't matter.

Despite being on the planet for over a million years, the era of the Northern White Rhino is drawing to an end.

A tragic minute it will be.

(As an aside, my photo was taken in color, but converted to black-and-white using the Silver Efex Pro from the Google Nik Collection.)
Posted by Paul at 9:26 PM No comments: