Brasserie.
Okay, what is the first word that comes to mind? 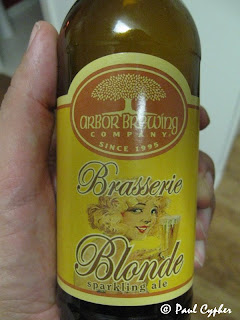 Now, check out the label on the Brasserie Blond Sparkling Ale?

Blonds in bras. That is exactly what the marketing wizards at the Arbor Brewing Company wanted you to think.

So, what happens if one buys a beer with a title that suggests underclothes and has a image of an attractive blond on the bottle? Simple. Open the bottle and half nude woman jumps out. How cool is that?

Very cool, I'm sure. But, that is not what happened. Damn.

Note the spelling. "Brasserie", not "Brassier".

Apparently, "brasserie" is French for a café that doubles as a restaurant with a relaxed setting. It can have more informal eating hours than a full-fledged restaurant. Typically, a brasserie is open every day of the week and the same menu is served all day. "Brasserie" can also be "a brewery".

If the Arbor Brewing Company wanted you to think "restaurant", I think they could have put something else on the label, right?

That said, what came out of my bottle? A half nude blonde? No. This.

Okay, no, she did not really jump out of the bottle. But, I think she best describes what I thought of the beer. It poured a deep straw yellow color (the "blonde", I assume) which is fine, of course, and had lots of suspended particulate. But, the carbonation was totally out of control. The head was easily two or three fingers high. After it died off a bit, the roaring of the fizz was outrageous. It was very difficult to get a handle on anything beyond aroma (I use the word loosely) because the carbonation was so strong. It smelled like moldy fruit or something equally bad and was rather watery on the palate. The finish was heavy and rank.

Paul: I clicked on This. Where did you get that flattering picture of my ex-wife? :)
Mike Mencotti

The Internet is a wonderful thing. Just Google any phrase you can imagine and go for a ride.....