The Ball Wasn't Dropped, It Was Dropped

I'm a big fan of the Civil War. While I certainly don't know everything about it (who does?), I know a few things. Among them, I now that one of the best ways for 21st century people like us to really get a handle on the 1860's is to travel there. No, you can't really travel there (duh), but you can visit a re-enactment. There, you can get a feel for wool clothes in July. You can smell the campfires and gunpowder. You can see how they ate and where they slept. Make sure you visit the doctor's tent. You will never complain about your doctor's visit again.

So, I sat shocked when I read this story. Anytime someone gets shot, it's serious stuff. But, with this line, spoken by a Sheriff investigating the incident, I couldn't stop laughing-

"I can't say that anybody dropped the ball," he said.

If you know anything about civil war firearms, I suspect you understand the dark humor here. Early Civil War weapons didn't fire a bullet. Yes, you guessed it - they fired a ball. So, no, it doesn't appear that "anybody" "dropped the ball". Instead, he "dropped the ball"...

...right down the barrel.

With a modern firearm, the lead projectile, powder and primer are basically one. We call it a bullet. Pull the trigger and bang. The pin hits the primer, which lights the powder which moves the bullet.

With many older firearms, like those from the early Civil War, for example, it's different. The cartridge is a 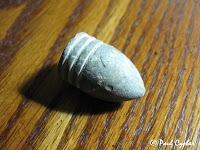 paper square folded to hold a lead ball (which does not have to be round, like a marble, by the way) and some powder. You tear it open with your teeth and dump the powder down the muzzle of the barrel. After placing the ball and the paper at the end of the muzzle, you push like hell with the ramrod to seat the ball at the end of the barrel. After placing your percussion cap, you aim and fire. The hammer hits the cap, the cap drops the spark into the barrel, the powder goes off and pushes the ball down the barrel and towards its target.

Yes, all those steps. You might even hit your target, too!

Sure, accidents happen. By how does one fulfill a lengthy, multi-step process on accident? Can you say "Felony" or "Assault?"

I knew ya could, boys and girls.