So, the title of this post is "See You Later."  You're probably thinking I'm done with this blog as my writings have lightened up a bit as of late from grad school, right? 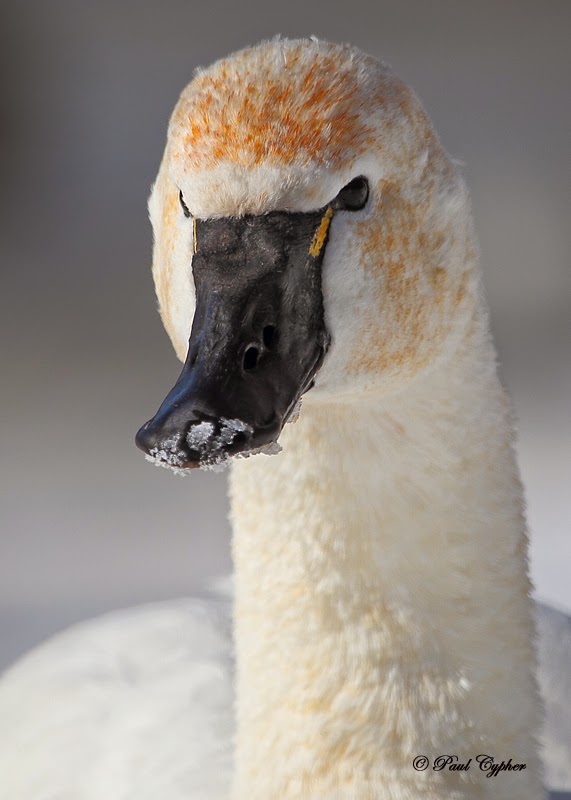 The bird above is a Tundra Swan.  The shape of the black bill and the yellow spot at its base rule out the Trumpeter Swan (the lookalike cousin from the American West) and the Mute Swan (hopefully eradicated from the state with high velocity lead injections in the future).

I snapped this picture in early March.  (I had hoped to post it here shortly after I took it,  but I never really had the time to do it.)  With waterproof gear and those little pocket warmer thing-a-ma-bobs, I slowly moved  out on to the Trenton Channel where this bird was sitting on the ice. I estimate that I crawled on my belly at least 200 feet out from the shore.  I needed to move slow as I did not want to disturb him.

The previous paragraph is largely a crock.  Yeah, I took the picture in March. That's about it....

In truth, the bird was hanging out in Elizabeth Park in Trenton. The waterfowl there were, well,....tame largely from all of the public feedings. Well, okay, they were not completely tame, but they certainly were not as edgy as their wild counterparts.  Once I sat on the shore, they settled in and didn't seem to mind me.

His name might tell you a bit about him.  "Tundra" is a reference to the breeding grounds.  If you're thinking Trenton and Tundra are about 1,918 miles apart, you would be right, give or take a few hundred miles.  I can assure you this bird is long gone as I type here tonight on a beautiful late April evening.  Assuming he is alive (you never know), he is en route to the polar regions.  Hell, he might already be there.

So, will I see him again?

Knowing how migration can sometimes work, it is very possible that this very bird will hang out at Elizabeth Park again this coming winter. Or he could hang with thousands of his buddies a few miles south of Trenton in the open water of the Detroit River. In any case, we can be hope he will be winging his way into the region by Halloween.

But lets not get ahead of ourselves.  I'm not looking to the fall yet.  After all, we have not even hit the month of May!  That's the month birders dream about in these parts.  Gillions of little songbirds of just about every conceivable color will be heading north right through our parks and neighborhoods.  Many would argue that it is the single best month for birding.  Natalie and I are looking forward to it.

That said, autumn will eventually get here.  That's a fact.

As for my Tundra Swan buddy?  Perhaps I'll be seeing him later....
Posted by Paul at 9:09 PM No comments:

Wikipedia defines a star as a celebrity who is well-known for his or her leading roles in motion pictures.  It also defines a star as a luminous sphere of plasma held together by its own gravity. How cool is it that I got to experience a bit of both a few weekends ago.

No, I'm not a star.  But, I got to experience what stars sometimes experience.....

No. Cripe. I didn't experience a brainwashing,  a complete facial reconstruction, or discover piles of blow in the dressing room.

As a part of my ongoing graduate studies in Historic Preservation, I took a class in Historic Preservation and Tourism in Traverse City.   In the end, a significant portion of the class involved the development of a tour for the downtown area highlighting historic structures.  Courtesy of  Dr. Ligibel, the course's professor, we secured the ultimate behind-the-scenes look at a Traverse City gem: the City Opera House. 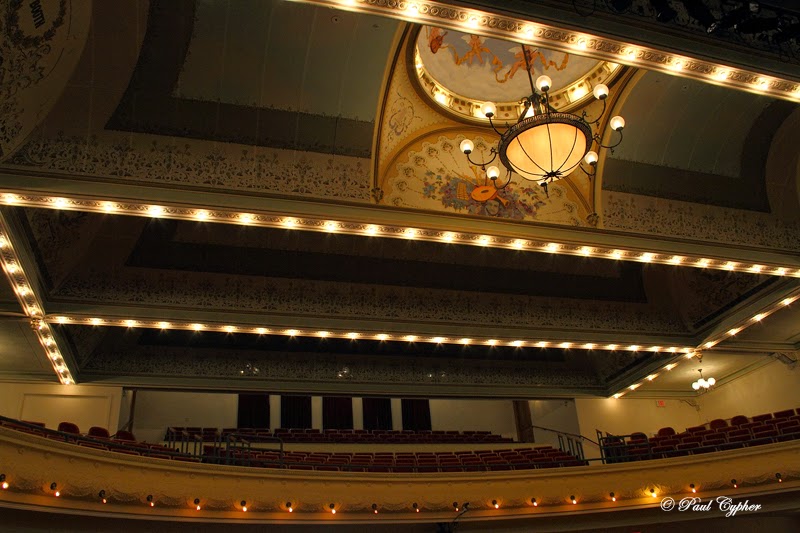 Built in 1891, it is a must on any historic tour of Traverse City. It was listed on the National Register of Historic Places in 1972 and is one of six historically intact Victorian opera houses in Michigan.

The barrel vault ceiling and walls accommodate fresco paintings, gold leaf accents and Victorian styling. Names of notable Victorian performers are found painted on the ceiling domes, including Edwin Booth, brother of, yeah....that guy. The City Opera House had removable seats allowing the auditorium to double as a banquet hall or dance floor. This is unique among large opera houses in Michigan.

By 1930, after decades of parties, plays and other festivities, the City Opera House was leased by local movie theatre owners then closed. This was potentially done as a maneuver to limit intra-city competition with their other theatres. The structure remained officially closed until 1985. In the end, while a bit shrewd,  and perhaps a bit cunning, from a business standpoint, it may have saved the building from decades of abuse from general use.

In 1978, the City Opera House Heritage Committee formed with the intention of raising funds to bring the structure back to life. In 1980, the sole donated the building to the people of Traverse City. Quinn Evans Architects was secured to rehabilitate the building at a cost of $8,5000,000.

Rehabilitation was extensive but in no way compromised the original feel of the 1892 building. An amazing combination of subtle modern influences have been blended with late 19th century décor. Air conditioning, state of the art lighting, full kitchen features and multiple elevators for the handicapped do not interfere with Victorian influences, including stained glass windows.

All told, the City Opera House is an outstanding example of historic preservation. Not only does it have a significant history with the city, but it is shows all the indications expected for successful heritage tourism: authenticity, ambiance, amenities, affordability, and access.  If you get a chance to check this place, do it. 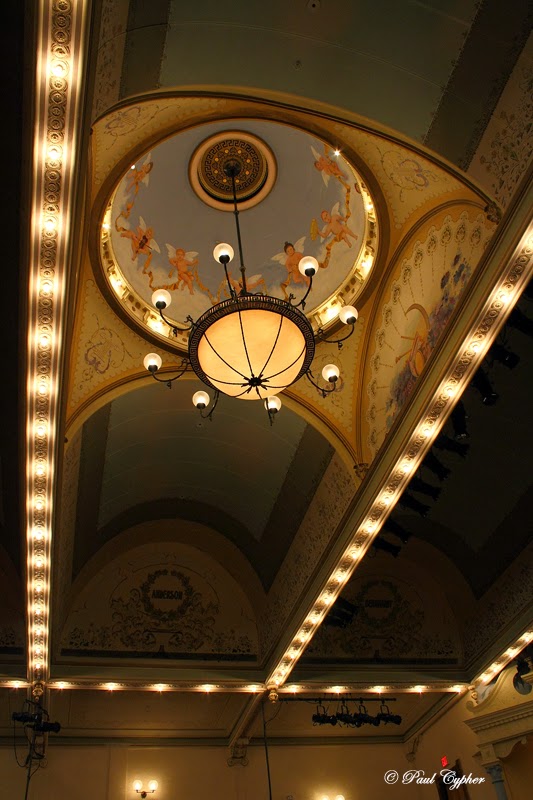 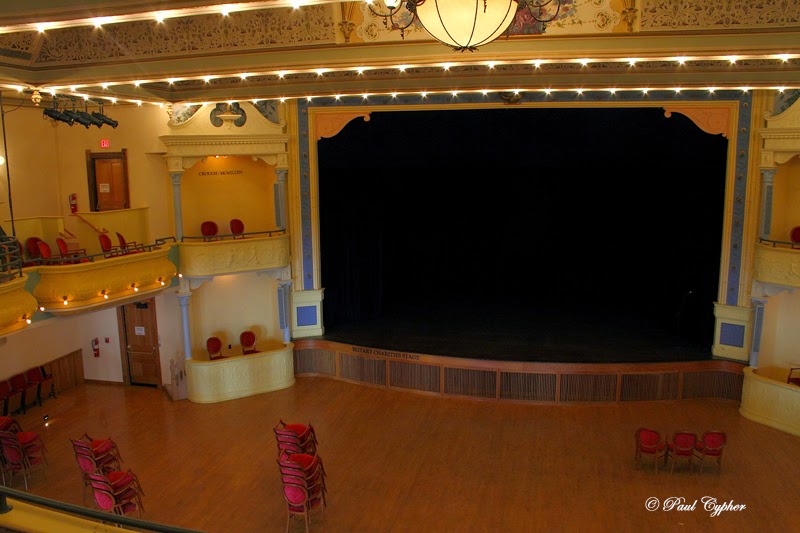 On the other hand, there are those plasma balls (not to be confused with speedballs used by those other stars...).  These are the ones in the sky that folks have been pondering for as long as there have been people to ponder things.  Sadly for those of us in this current age who reside in large metropolitan areas, light pollution is a nightmare. So many folks in these areas are just not treated to the show mother nature puts on every night in rural areas. With that, I certainly try to never miss a moment when I can see the stars in their glory...on stage, if you will....

As fate would have it, Traverse City is small enough where light pollution is a fraction of what it is here in Metro Detroit. After a horribly botched attempt at astrophotography in Arizona a few years ago, I figured it was time to try again. I though the Campbell-DeYoung Farmhouse (from my field school last year) would be a great place for Take 2.  With my camera, tripod and all the needed gear in tow, I gave it a whirl.

Sadly, in my original images, the composition totally sucked. Bad.  From my angle, the bush in the front yard next to the house seemed to magically grow to be as big as the house itself.  I figured a viewer wouldn't know if the subject was the sky, the house, or the bush - it was that awful.  With the sun now gone and stars popping out left and right, I had to totally re-tool in the dark. That is generally frowned on in this type of photography as you can't see what the hell you doing. Sure, you can have a headlamp (which I did, of course) but it is just not the same.

Finally, with my viewing partner getting cold, tired and itching to leave (I won't mention names but it rhymes with "Natalie" ) we cut loose. But, not before I gave it one more go. 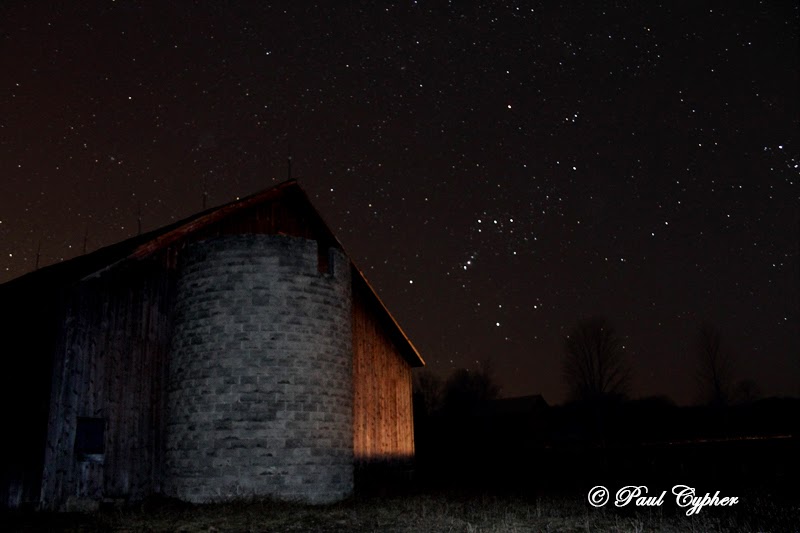 I'll take it. I'll be the first to tell you it has problems, but I'm pretty pleased for the most part.  With Orion shining bright right of center, and the barn nicely lit (by a passing car!), I figure I can try and tweak it a bit more for a better looking sky.  For whatever reason, it looks tad better on my computer than it does here on Blogger, but whatever.

With my appetite now whet for more astrophotography, I'm eager to see what I can do next.  I've already called DTE Energy to see if they can kill all power to Detroit upon my request.  In fact, I know I guy who works for them. Maybe he can flip a switch or something.  I'll keep you posted.

There you have it.  A weekend with a stage for stars and some stars on stage.
Posted by Paul at 7:54 PM No comments: