Admittedly, hanging out at a hawkwatch can be a head-scratcher.  Sure, if the hawks are flying, it can be quite exciting.  When their not, like today, you sometimes wonder why are you are hanging out at all.
Then, the unexpected flies by...... 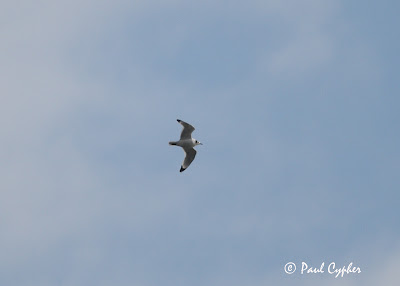 The darker grey shades combined with the white bar "inside" of the black wingtips scream "Franklin's Gull."  At least 3 of these birds dilly-dallied past the hawkwatch today.  While certainly not unheard of in Michigan (they were not even my first park birds!), a chance to see them away from their usual haunts is always cool.
The real story here, if you ask me, is not just "What bird is that?", but "Who the hell is Franklin?"
No, not Ben. Sure, he did some pretty cool things, but the bird was not named after him.
In the grand tradition of scientific naming, you name something after somebody else if you are the the first to describe it.  It turns out William Swainson named the the bird in honor of John Franklin, an early arctic explorer.  (Swainson had a ton of birds named after him, but that is a story for another time.)
Franklin, an Officer of the Royal Navy led multiple trips to the Arctic (before and after his time as Tasmanian Governor).  During an early trip, the specimens that were ultimately named for him were collected in Saskatchewan.  His final trip to the arctic, well.....it killed him....and most of his crew.
The elusive Northwest Passage was yet to be discovered in 1845.  Within months, despite all the planning and preparation (two ships and three years of supplies), Franklin's ships were ice bound and the men were dying.  Scurvy?  Yeah, that was a problem.  Exposure? Sure. The Arctic is a brutal place to be any time of year.  Starvation? Yup.
But the real kicker turns out to be the lead-poisoning.  It turns out in the late 20th century, some of the crew remains were located and tested.   Lead levels where staggeringly high.  While not lethal, it was enough to cause headaches, memory loss, fatigue, and pain.  All issues you don't need to deal with when trapped in the middle of nowhere with no chance of rescue.
One thing led to another and it appears that the early canning operation that had assisted with the food prep messed up the can's seams.  Using a lead mixture as a solder,  the cans were assembled incorrectly and the lead was in contact with the food!
They never stood a chance.  All the odds were stacked against them and their own food ultimately did them in....
Frozen In Time is an extraordinary read. Get it. Stranger In A Strange Land is a chilling piece of work by Iron Maiden and was written about the crew members who had been found. Watch it here.
So, if birds could think like people, I wonder if the moderately lost Franklin's Gulls that flew by the watch today were wondering "What am I doing here?"
I wonder if John Franklin was thinking the same thing?
Or maybe he wondering "Why do my peaches taste funny?"
Posted by Paul at 8:50 PM No comments:

Despite a wild and crazy day at the ole peanut factory, I managed quite a bird today.
A quick call from Darrin after he found the bird,  a quick shot to the south end of the park, and the next thing you know, I am looking at a little gull, called a Little Gull.
Notice, first, the name.  "Little" Gull, not Seagull. There is no such thing as a seagull. Lots of gull flavors.
Can you guess how big a Little Gull is? Right.  Not big at all.   In fact, it is the smallest gull in the world.  It is much smaller than the ones you see hanging out at the McDonald's dumpster (those are likely Ring-billed Gulls, by the way).
How often are they seen in Wayne County? Not very. You could probably count on one hand the numbers seen there in the last 20 years.  Heck, you might even be able to count them on Homer Simpson's hand ( he has only 4 fingers).
Sadly, upon my arrival, it basically took off upriver, so some people missed it.   With distances in the order of hundreds of yards, it's dainty size while flying with it's larger cousin, the Bonaparte's Gull, was not as noticeable as you might think. The real kicker was the completely black underwings and the rounded wing tips. The "Bonies" have wings that are much more pointed . Check out this picture  below (no it is not mine) and you will see what I mean: 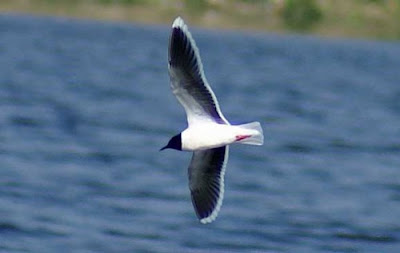 With autumn slowly but surely giving in to winter (okay, it was over 50 degrees and sunny today....but work with me, okay?), I figured it was time to try and clear out some fridge space of my autumn beers. 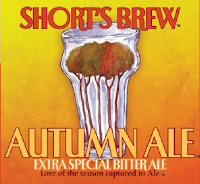 #832 was from the Short's Brewing Company.  The Autumn Ale is simply one of those beers that makes you say "Huh?". I don't mean that in a bad way at all, but I certainly think it is true. It pours an inviting amber color with a tan head.  On the nose, those bready tones are pleasantly mixed with the hops. That is when things start to get weird. The medium body seems to give way to a creamy body half way through.  The ever-so-slight carbonated bite gives way to the almost overpowering citrus tone (akin to green apples).  Buried in there somewhere are the hops and malts with a caramel-like sweetness, but the citrus never lets go.  The hops and malts are masked in the finish, too.  Hmmmm.  Apple beer?

All that said, this is one of the those funked-out beers that you can't call "bad".  It's not.  In fact, it is far from it.  I would simply cut myself short and say that is....unusual.  Not great. Not bad. Yeah....unusual.