Forts and Fun in Fudge-land

Natalie and I recently had the chance for the few-day getaway.  You might be thinking that we jetted off to some exotic location.  Nah.  Maybe we just stayed home and cleaned the garage.  Nah. A national park?

Mackinac Island, that quaint island getaway in the Straits of Mackinac, was once the second National Park (after Yellowstone, of course).  While its tenure was short-lived (it reverted to a state park in 1895), it really should be visited by Michiganders.   With a few days to spend, we made a go of it.

First things first, we did not chase the Crested Caracara in the Upper Peninsula.  A long story short, we just didn't feel like it.  First Michigan record? Sure. So what.

Anyhow, the Straits is not just about bridges and forts.  Our first destination was just some quiet hiking along Search Bay. We had trouble finding it.  Bah-dum-dum.  (Search? Find?  Get it?)  No really.   We did.   Once we there, however, it was really quite relaxing.  Sadly, the onset of the expected afternoon rain killed the day though there was enough to see and do in St. Ignace, including a great dinner with Natalie's Uncle Mark and Aunt Gail who happened to be in town at the same time! 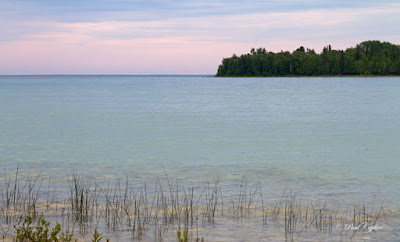 With rain gone at sunset, the evening afforded us the chance to see the Straits and the Mighty Mac.  One of the largest suspension bridges in the world, the Mackinac Bridge is more or less the identity of Michigan.  Connecting the Upper and Lower Peninsulas, it certainly beats driving around the lakes via Wisconsin, Ontario, or taking a ferry!

It is worth mentioning, by the way, that while workers did die during its construction, no one is encased in the concrete. Urban legend is incredible, isn't it?  Basically defined as modern folklore with fiction deeply rooted in local stories, it is amazing what people believe even in the face of the absolute truth

In any case, being encased in concrete would have been a great solution to the Apocalypse that rolled into town around midnight. Veterans of that now famous Boy Scout Troop 831 Frog Lake camp-out know what I am talking about (Neal......).  In the middle of the night, the storm, measuring 49 out of 50 on Paul's "Holy Crap, we are about to die!" scale, moved in.  What a bruiser.  Like the scouts of yester-year, we fled to the car as we had legitimate concern for our safety.  Wind. Hail.  Small dogs.  Kansas farmhouses.  You name it.  It was all over in 10 minutes.  The tent did fine.

Likely, the storm created for the following day picture perfect weather.  In hindsight, it was totally worth it.  The entire day was spent on the island.

For first time visitors, a visit to the Fort is a must.

Perched conveniently on a bluff on Mackinac Island, Fort Mackinac was originally built by the British in 1780-81. By 1796, they had rightfully turned it over the Americans. After all, it was on American soil. Yes, American soil, as the Brits had lost the Revolutionary War. 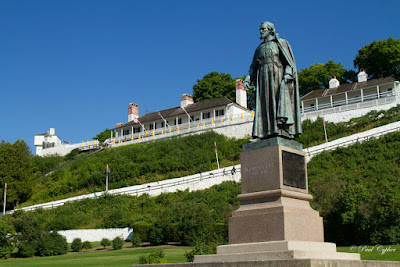 Well, it wouldn't be long before they got it back.

With the onset of hostilities marking the beginning of the War of 1812 (which started in....wait for it.....1812), the British attacked the fort.

Now, you might be wondering how the hell they did it.  150 feet off the surrounding waterfront property, they must have had a secret weapon.  No, they didn't. Well, okay, yes, sort of.

While the War had been newly initiated, the Fort Commander did not yet know.  Yes, that's right.  No emails. No texts.  No CNN.  The courier with the written declaration of war had not yet arrived.  One can imagine his surprise and horror when fort awoke to see hundreds of British soldiers and their Indian allies ready to attack the fort....

Oh yeah, that's the other crazy part.  Assaulting the gigantic cliffs from the south would be stupid. The British came on to the island from the north. Believe it or not, the center of the island is even higher than the fort. With cannons ready to rain hellfire down the surprised Americans, it didn't take long for them to surrender...

...without a shot begin fired. 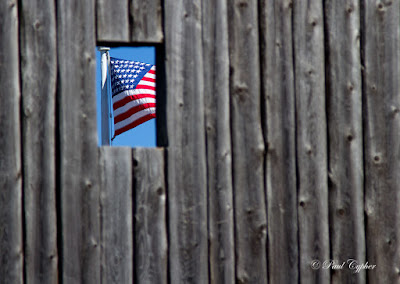 It probably goes without saying that military bases in remote corners of the continent see their share of death.  Death means burials. Burials mean cemeteries.  During our bicycle ride around the island, Natalie and I found ourselves at the Post Cemetery.  I would love to tell you when it founded, but I can't, because nobody knows.  What is certainly known is the fact that there are more interments than stones as the earliest graves were marked with simple wooden crosses that are now long gone.  Local stories have soldiers from the War of 1812 being there, but it can't be confirmed. 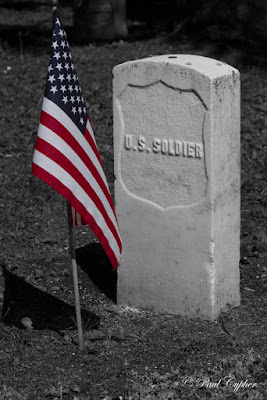 Needless to say, you have to be dead to end up buried in a cemetery (well...one would hope,anyway...). But it's how you die that can be so intriguing.  During the Fort's heyday (up until 1895), troops were stationed there and in some cases, died there.  Maybe it was an illness that did them in.  Maybe it was a workplace accident.

Wouldn't it be an amazing story if you got shot, but lived?

As a graduate of Harvard's Medical School, I appreciate medicine both from a practical standpoint and a historic standpoint.  Who did what and how they did it is simply fascinating to me.

Take William Beaumont, for example.  Detroiters will know the name from the hospital. Few knew of him as a  medical doctor.  His work in gastroenterology? Legendary.

On June 6, 1822, in the trading post on Mackinac Island, a voyageur (not to be confused with a voyeur) by the name of Alexis St. Martin took a musket ball in the belly at point blank range. By all rights, he should have died. But, he didn't.  In fact, he went on to live for decades despite a peculiar wound.  The hole blasted in his belly healed in such a way that one could peer right into his stomach.  In the same sense that a doctor can open a patient's mouth and see tonsils, Dr. Beaumont could see into Martin's stomach through the hole (called a fistula) below his ribs.

Realizing that the knowledge of human digestion was close to zero, Beaumont began years of studying digestion using Martin as his laboratory assistant/guinea pig.  Using bits of beef tied to strings, he would dip the meat into the fistula and time it.  After, for example, one hour, he would remove it and study it.  Collecting stomach acids was certainly not out of the question, either.  A whole host of various studies ensued. He went on to publish Experiments and Observations on the Gastric Juice, and the Physiology of Digestion in 1838.  Given the knowledge of medicine at the time (or lack thereof), this was a huge accomplishment and confirmed scientifically that digestion was largely chemical and not mechanical. 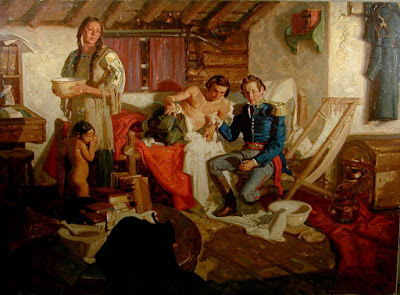 Needless to say, the opportunity to enter the building where Martin got shot is awesome.  Golfers may want to visit a popular golf course.  NASCAR folks visit race tracks.  Novice gastroenterologists need to get to Mackinac Island.  I got to visit the place where a sweaty dirty fur trapper got shot in the bowels and went on to live as a lab rat.

The trading post still stands on the flat lands below the fort.

Except its not the real building.  Its a reconstruction.  I don't care.  It stands in the same spot!  Close enough! 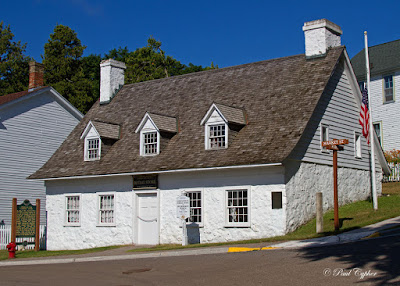 A ride around the Island on bicycles is worth it, too. I have to admit that I was leery at first.  "Around the whoooooooooollllllllle Island...?" I whined.  Natalie reminded me - "Hey ass, Paul, we do this same distance when we ride at home..." As some folks say, true dat.  Okay, maybe the island is a tad more, but we paid for it with the cut down the middle of the middle of island....

Remember when I mentioned how the British occupied the high ground to the North of the fort? Yeah, well, biking up the high ground was a bit rough.  However, the coasting down the hill was totally worth it. The best part was taking my feet off the pedals and screaming like an 8-year old and not being able to stop at the bottom. 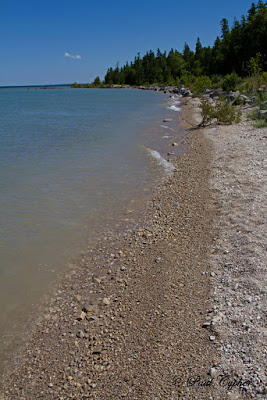 It is worth mentioning, in case you didn't know, that motor vehicles are not allowed on the island.  All traffic is on foot, bicycle, or horse drawn wagon.  Watching for cars is simply not needed are there aren't any!  Road apples? Now that is a different story!

The final day saw us back on the south side of the Bridge.  Fort Michilimackinac (MICH-uh-luh-MAC-uh-naw) was the destination.  Before there was Fort Mackinac, there was Michilimackinac.  It was started by the French in the early 1700's only to be taken over by the British when the French basically vacated the region. The Brits decided that a relocation of the fort was warranted. What could not be dismantled and moved (to Fort Mackinac) was burned.  Centuries later, archaeologists (minus the whip and fedora) relocated the exact positions of the buildings.

Using the known construction practices of the time, one can now walk the Fort as it appeared in the British occupation. However, since the French built it, the construction practices are French.  It was nice to see all the methodologies that I had studied in my various classes.  Columbage, dove-tails (which truly lock the logs in place) vs. square notches (which  truly don't and therefore suck).

How about clapboards, weight poles and dormers.... 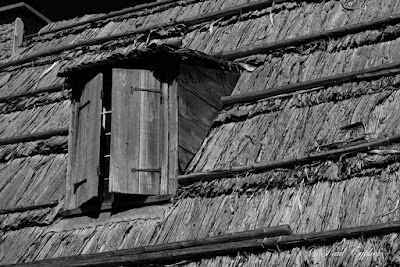 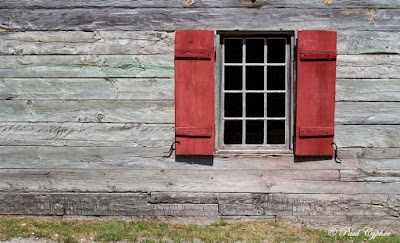 ..or views that were never seen by the 18th Century French... 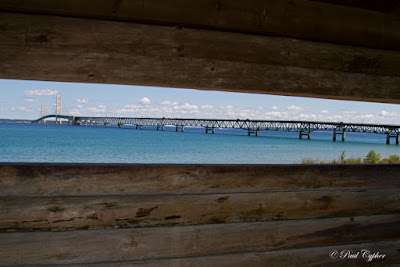 Certainly, any fort has trouble makers.  Punishments can be mild or extreme depending on the nature of the offense.  One plausible penalty would be some time in the Black Hole.  Nothing more than cell below the floorboards, the offender could be there for days with limited food, no light and no heat. 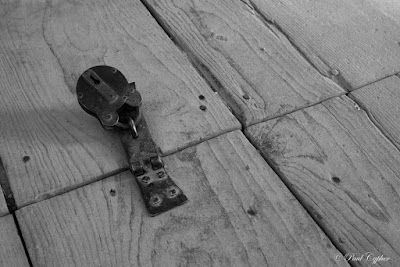 One might wonder exactly what actions would constitute time in the Black Hole and what would be comparable today.  Hmmm, how about making statements encouraging a foreign country to spy on you? Or, how about having classified documents in your emails stored in your basement?

Black hole time, for sure, huh?

Overall, no new birds.  After all, it was only a few hundred miles from from home.  Some might it argue it was a bland trip. I say "nay."

Short? Sure.  But totally worth it.  They always are.