As a general rule, birders get excited about birds that are hopelessly lost, er... I mean out of range.

Take the Brambling, for example.  Native to Europe and Asia, this tiny finch occasionally makes its way to North America, believe it or not. Where?  You never know.  Sure, they have bred in Alaska (once) but that was considered a rare occurrence.  With records scattered all across North America, there is simply no telling where it may show up.

So, when one was found a short hop outside of Cleveland a few days after Christmas, I was certainly watching the bird reports as I hoped to go see it.  I had never seen one before.

In the early morning hours of January 4, Natalie and I took off.

Even though Michigan had experienced warmer than average temps for the winter thus far courtesy of "El- Meano", we found ourselves driving through lake-effect snow squalls to get to the known location.

By 10:30 or so, Natalie and I arrived at the farmhouse outside of Medina, Ohio.  To our surprise, no one was there.  I figure most chasers had chased it. Plus, on a Monday, folks likely were at work.  With traffic concerns at zero, we conveniently parked by the house and waited.....

Natalie quickly shouted "I have it!"  I was on it moments later. 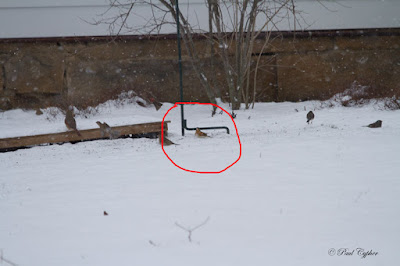 Now keep in mind,  the Canon 7D partnered with a f5.6 100-400mm internally stabilized lens with L-series glass does many great things. One, it sounds cool on a blog read by less than a dozen people.  Two, it fails to photograph a smaller-than-a-soupcan songbird at 30 yards (I would argue most cameras will on cloudy, crappy days).  So, if you grief me on the photos, well, too bad.  If you are really hankering for a nice photo, this Brambling photo is nice.  So is this one. And this one.

Needless to say, given the precarious parking situation (a blind hill for a road with a 50mph speed limit) and the snow squalls, we opted to press on with less than 5 minutes of viewing.  This was, by the way, my 245th Ohio bird as well as my 669th life bird.   Mission accomplished.

With the target bird in the bag, the rest of the day was ours to go play.  A quick stop at the Cuyahoga Valley National Park visitor center (yes, folks, Cleveland has a National Park) gave us a refreshed lay of the land as Natalie and I had been there before. By that point, it was basically lunch time. A quick stop at the Winking Lizard in Peninsula made for the perfect meal.

A nearby walk noted for winter birding was not particularly exciting.  With that, we opted to pay a visit to some previously visited locations.

Blue Hens Falls is an easy hike from the car and shows, in its simplest form, how a waterfall might form.  Water, flowing over a given substrate (in this case, sandstone), chips away at the weaker rock layers beneath (in this case,shale). 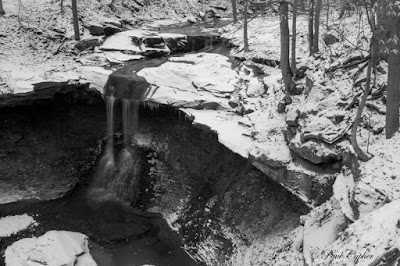 The photograph loses scale a bit but the falls are about 15 feet tall. I would have loved to scramble down there (something I have done in the past) but I was concerned with the snow cover and my less than ideal boots.  Given the overall lack of color in this winter landscape, I thought a black-and-white photo conversion might be nice. 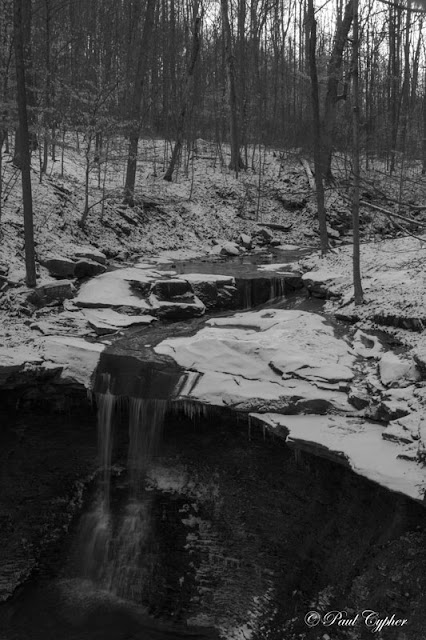 A short bit later, Natalie and I found ourselves at Brandywine Falls.  While certainly beautiful, it was also once viewed as a source of energy. Remains of early mills are still present on site.  At 60 feet tall, it is considered a true gem in the region. 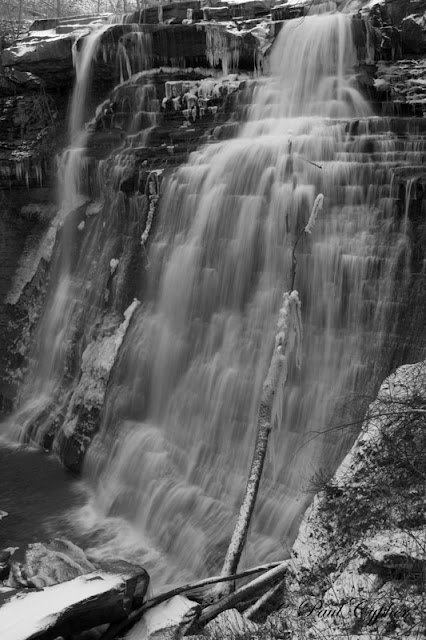 After an aborted effort to secure Little Gull and Black-headed Gull at the Cleveland waterfront at sunset, we opted to move along to dinner at what has certainly become one our favorite places for chow: the Great Lakes Brewing Company.

Started in the 1980s, its always nice to have a great beer at a place that contributed to the wave that is now the Craft Beer Movement.  Even more to the point, they take environmental issues seriously.  The tomatoes on the pizza were grown up the street. Literally.  The spent grains are passed off to farmers just outside of town. Great beer. Great food. Environmental ethic. A trifecta, if you ask me.

To make the evening even more nice, the building is older than the hills. The basement, where we ate, has old stone foundations and beams that are enough to make a historic preservationist drool. Dim but solid with a great atmosphere, this place is a must on anybody's "Where to eat in Cleveland" list.

Better yet (if that is possible), they had a band playing on the stage. Okay, the stage was basically a large step and they were two dudes with acoustic guitars, but they were really good. I'm mean really good. I'll have to postpone my own guitar phenom world tour. They were even sporting the Bob-Dylan-harmonica-on-the-neck thing.  To top all that off, the guy's name is Thor.  Way cool. What a great way to wrap up the evening.

The drive home was, as you would expect, a drag.  They always are, right? But, the day was as they should be be - great birds, fine beer, old buildings, nice scenery - all with my wife.

What more you could you want?