With the chilly weather upon us, I figured it was time to get going on some chili recipes. While I have a few recipes for chili in my books, I thought I would hit the Internet and see what was to be had. I found a website with a recipe called "Day Before Chili."
The premise of the recipe was to whip it up the "day before", let it sit refrigerated overnight and then re-heat. They swore it would be better that way! Well, okay. So I gave it a go! 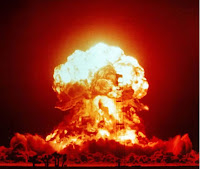 Now, before I get into this, you might recall a made-for-television movie that aired in 1983 called "The Day After". While I was only 13, I remember some of it. It was about nuclear war between the Soviet Union and the United States. They didn't get into who started it, because it was more about the families. It won two Emmies and was nominated for a pile more.

What does the Day Before Chili have to do with The Day After?

Both are about a bomb.

All the ingredients sounded good with nothing really crazy or out of this world. Ground beef, kidney beans, red and green peppers, tomatoes, cumin, onions, garlic...you get the point. Plus, it called for 6oz of beer! That is extra points in my book! Throw it together and put it away? I could have just as easily thrown it away. Well, maybe it was not that bad but if I paid for it in a restaurant, I would have been highly disappointed.

It was simply a blah recipe. Unfortunately, it called for over 1 1/2 pounds of beef plus tons of other stuff so I have alot left. Maybe I can caulk my tub with or something.....

Plus, the kitchen was a disaster area when I was done preparing it.

Yeah, you guessed it:

Oh my gosh Paul-- what a blast to the past. I remember that movie... they ate rats and it freaked me out for a long time. Yuck!

ps... sorry about the chili. my input is to always use real beans not canned, and jalapeno tomato mix with ground turkey and lots of chili powder. Cook it in a crack pot all day.

I thought real beans are found in cans? :S

Normally, I am all for simmering chili all day (or least a few hours). But, something grabbed my attention (I'm not sure what) and I thought I would give it a go.

Get the dried beans and soak them overnight. My kids won't even eat chili with canned beans anymore. They have a better flavor. Rule #1 in cooking never eat anything out of a can!