I found George! I did!
No, not that George.  Everybody knows he was buried at Mount Vernon after basically being bled to death by his doctors.   Yay, the good 'ole days! 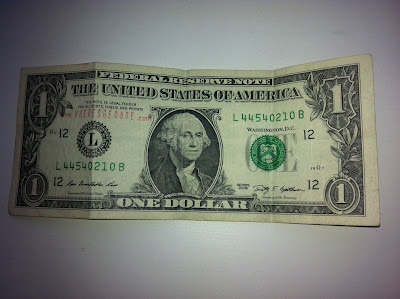 WheresGeorge.com is quite a hoot.  Created in 1998, it allows folks to track money by simply entering the Series and Serial Number while cross-referencing the holder's zip code.  Voila!  When others find the same bill, the database can create a history of the bill's travels.  You know you have a WheresGeorge bill when you see the stamp. It is in the upper corner in red in my photo.   (Yes, technically, stamping the bill is considered "defacing" and is therefore illegal, but the Secret Service has openly declared they basically don't care in this case.)

It appears my bill, a part of the 2009 series, was first tagged in Rochester, New York on December 18, 2010.  Nothing else was added until I logged it in a few minutes ago!  During that time (1 year, 92 days, 9 hours and 34 minutes), it officially traveled a meager 290 miles.
"Officially" is the key word there.  It could have been to Alaska.  California. Florida. Hell, maybe all three!
By comparison, for those of you who are curious, the record bill has 15 hits and traveled almost 4,200 miles in three years.  It has not been recorded since March 2005.
I can only imagine how it could have been used.  Maybe it was dumped into the donation bucket at a National Park.  Maybe it was placed in the hand of a girl scout so the purchaser could take home a box of cookies. Maybe it ended up in the g-string of a.....ehhh, nevermind.
For the time being, George will be tucked into the corner of my wallet. I plan on spending him on vacation in a few months. The plan calls for Arizona in June.

House Finch From My House

My condo (now with a taxable value of $.98 per my latest tax statement) has two levels.  For  years, I have been watching the goings-on in the spruce tree about 25 feet outside the second-floor bedroom window.  For years, I had the thought of taking a nice picture of a bird in that tree.  I had even envisioned taking the screen out in the hope that I could have a clear view of the tree top with the big trees in the back ground (they're across the street).
Yesterday,  a House Finch finally cooperated. 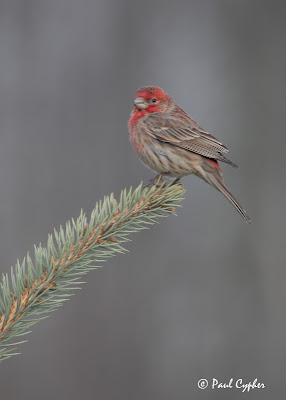 Sadly, as you can see, years of hopes did not pan out.  I wasn't really ready for this. It was just there and I happened to have the camera on the dresser.  I knew there NO WAY I was getting that screen out without it the bird flying off.  So, against everything I have ever read, I photographed the bird through the dirty window.
If only the angles were right....
If only the window was clean....
If only I knew what I was doing....
Looking at it  from a completely non-photographic perspective, it turns out this bird would not have been in my yard (or state, for that matter) as recently as the 1970's.
Originally a bird of the western United States and Mexico, some wags were selling House Finches in New York City.  Realizing they were about to get hammered for clearly violating the Migratory Bird Act of 1918, they released the birds.  As the decades ticked by, the finches slowly moved west.
Interestingly, the western population has not yet met up with the western advance of the eastern population.  70 years have gone by which means 70 generations (more actually, but it depends on how you do your math).  I know ornithologists are interested in seeing what happens when the two populations meet again somewhere in the central United States.  Will they interbreed?  Will they not?  If not, should they be considered two separate species?  Would, then, birders everywhere rejoice?
All that comes later, I guess.  In the meantime, I will enjoy my blurry photo taken through a dirty window.
Anybody have any Windex, a ladder, and a hefty dose of motivation?
Posted by Paul at 9:23 PM No comments:

A few days ago, I got an email from the American Birding Association.  I get 'em now and then. This particular one really caught my eye.

The Black Swift , as it turns out, is a pretty mysterious bird. For those of you familiar with Chimney Swifts here in the eastern United States, the Black is a larger cousin that lives out West.  (Roger Tory Peterson originally described the Chimney Swift as looking like a "cigar with wings".  I might describe the Black as a kielbasa with wings.  In other words, a few inches bigger...)

In any case, the nest of the Black Swift is often found behind mountain waterfalls of the American West.  Zipping around the open space of mountain canyons, they scarf up insects on the wing. In fact, their legs are itty-bitty things so they don't spend much time standing around.

While their biology is fascinating and they certainly have an appeal to people birding North America, their location during the winter season was a big mystery. The extent of such knowledge was basically limited to the declaration "They go that way...." while one points a finger south...

In short, little gizmos called geolocaters were attached to the backs of four birds (captured on the breeding grounds).  Capable of detecting the amount of daylight the bird is exposed to each day, these locators, when recovered, can tell researchers where the bird has been.  Amazingly enough, three of the four birds fitted with locators were recovered!

Be sure to read more about it here.

Reading about the excitement of the find brought me back to my one and only Black Swift experience.
In June of '07, I was in Colorado. Birds and beers were a major part of that trip.   Anyone heading to Colorado for birding will likely head to Rocky Mountain National Park. Purchasing Roderer's book is a must, if you ask me.  A solid effort full of tremendous birding information, I followed it to the letter.
After a quick dinner in camp, I shot down to Wild Basin, a secondary entrance to the park in the southeast corner.  Roderer suggests Wild Basin as the most reliable place in Rocky for Black Swift.  Getting the bird here was key, simply because it saved me the trip to Ouray (a more reliable location according to some, but hours away).  He suggests waiting them out, especially at sunrise and/or sunset and adopts an almost “Field of Dreams” approach – wait, and they will come.  Sunrise was a bust, so I figured sunset.  After about 30 minutes, a single bird sallied past.   It was life bird #595.

Birding can be full of excitement and surprises. I felt a ton of excitement when I saw my one Black Swift.  I can only imagine the excitement the researchers felt when they unlocked a mystery relating to one of North America's least understood birds.
Posted by Paul at 10:18 PM 1 comment:

The first post-World War II World Expo was held in Belgium in 1958.  Like other World Expos, a large part of this particular event involved various visions of the future, especially transportation and architecture.

Highlighting the fact that this was the first Expo of the Atomic Age, designers got to work on a giant atom. Sure that sounds oxymoronish (like "smart Republican", "congressional ethics"  or "religious education"), but it turned out kinda cool.... 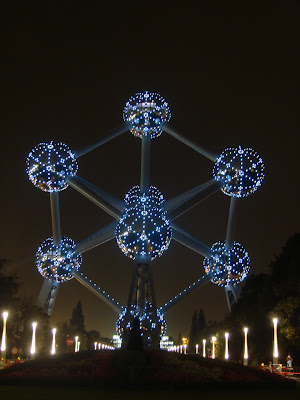 300 feet high, it represents an iron crystal magnified 360 billion times.  The nine spheres are large enough to accommodate exhibits, gift shops, a restaurant, and a kids dormitory, believe it or not.  The stainless steel covering now found on it replaces the original aluminum sheets.
Sadly, one can no longer visit all nine spheres. It appears that engineers went back and looked at the design and had concerns about the three top spheres.  Erring on the side of caution, they shut those down as they have no vertical supports. Wind tunnel tests have shown that it could fall over if winds exceed 140mph (a speed that HAS been recorded in the region before.)

So what you have is a design that is pretty damned neat, but some flaws (like the lack of supports!) have caused the final product to be short of perfection.

My 1,200th beer, the Atomium Premiere Grand Cru, parallels that idea - nice, but not perfect.  Brewed by the Brouwerij Van Steenberge N.V. in Brussels, they adopted the Atomium as their flagship beer.  Like the atomic model, it needs a bit of tweaking. 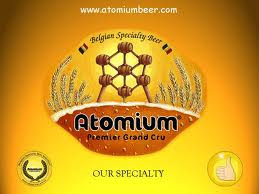 I don't have the special Atomium glass in my collection, so I had to just use my tried and true snifter.   A spectacular gold beer, with a foamy head easily 1 1/2" thick,  looks sooo cool.  The aroma was a wide array of scents ranging from citrus and apples to cloves and coriander.  Just smelling this stuff was enough to say "Wow!".
Sadly, like the original Atomium design, things got a bit awkward after completion.  I think the secondary fermentation  in the bottle (the addition of yeasts and sugars to the bottle before it is sealed) contributed to a higher carbonation.  On the tongue, taste buds winced a bit. That sting we all know started to interfere with my ability to taste what was going on.  The body had a slight syrupy feel contributing to a icky film on my cheeks after the finish.  The 8% ABV was not at all noticeable.
All my whining aside, this is still an excellent beer!  I just can't give it a five but a three does not do it justice, either.    A four it is!

(It is worth noting, by the way, that the brewers stated on their website:


"Atomium Premier Grand Cru is one of the only beers in the world brewed with 6 grains!"

Hmmmm, 6 grains in a beer is rare, eh?  Well, if that is the case, Doug Beedy at the Fort Street Brewery is even more wild than I thought.  I just recently had a beer of his - the 7x7.  Seven grains with seven hops.  Pretty damned good.  It was in honor of the seventh birthday of the FSB.  He did "6x6" on the sixth anniversary and  the "5x5" on the fifth.  There's obviously a pattern here.....)
Posted by Paul at 9:52 PM No comments:

Save those coins, people!!!