The technological level of the Canon 7D is simply amazing.

Take the photo below, for example. 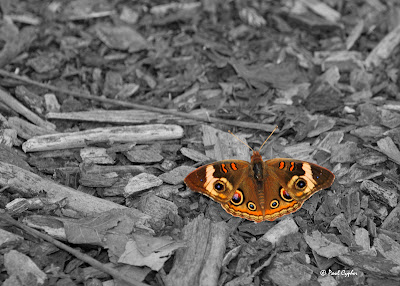 All I needed to do was will the photo to exist.  Advanced technology allows for a psychic link between the user's brain and the camera's processors. No button pushing of any kind. Envisions the image, project your thoughts to the camera, point and shoot.  It's that simple.

I wanted the Buckeye to be colorful while the woodchips from the Trapper's Run Nature Trail at Lake Erie Metropark would shift to black-and-white. I have seen that sort of selective coloring before and I think it can very effective.  Why use PhotoShop if the camera can do it for you?

I willed it.  It happened.

What will they think of next?

Now if I can just get a Golden-crowned Kinglet to sit still....

Shootin' For The Moon

The last time I was really paying attention to the moon was the during the few days I spent up north at the Ray family retreat.  As you might recall, I spent the drive home on the side of US-23 blowing chunks.  I'm pretty sure I have the Olympic record for projectile vomiting.

Wednesday evening, with my new toy in the hand and the night to myself, I went over to Elizabeth Park to see what I could see... 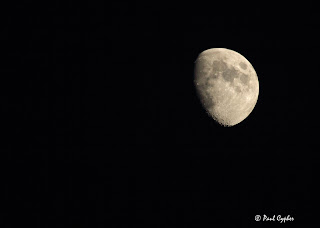 The moon.  Never a dull subject.  I couldn't agree with the astronomers and photographers more - yes, the moon is more dynamic when it is  not  full.  With only a part of the face lit, the mountains and mares are so much more inviting.

No, I did not take this picture with the camera on a tripod.  I hand-held the rig.   At 1/1000th of a second, I wasn't too worried about blur in the image.  Maybe next time, I'll use a more stable set-up.  Any way you look it, I'm just tootin' around.

Seeing this beautiful sight is even more appealing knowing the people around me are not dying of the plague......... 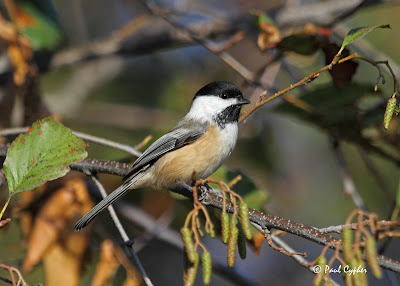 ....my first real image with my new rig.

Yes, it is a Black-capped Chickadee. Yes, you have seen pictures on this blog before of this species.  Yes, this picture basically sucks. The background is busy, the lighting is boring and it basically lacks pizzazz.

But, hey, this is a better than botched Red-tailed Hawks, Sandhill Crane silhouettes, and random leaves in the woods (I was testing exposures).

In short, my Rebel was on its last legs. I was not budgeting for this purchase but it needed to be done.  Repair costs and battery replacements would have cost more than the camera is worth (cameras, like computers and other tech items, become dinosaurs very quickly.)   What is the point of doing that? Plus, I was eligibile for the Canon Loyalty Program.  Leave the old rig with them and they give you money towards an upgrade.

Upgrade I did.  The  Canon 7D is superior to my old XTi in ways I cannot even begin to explain here.  Sensor size has essentially doubled (10 megapixels to almost 19 megapixels), 8 frames per second (from 3 per second) and incredible ISO capabilities.  I'm really looking forward to working more with this camera.

But, I have alot to learn with my 7D. There are more damned buttons and options on this thing than I would expect to find in a nuclear power plant (okay, not that many).  If one setting is off, I could be so hosed.  Switching back and forth between various settings (needed for various shooting circumstances) is a very "Okay, think this situation out, Paul..." sort of thing. Buttons are in different places and the whole feel is just....different.  With my old camera, it all was second nature.  I really have to have my head in the game in the coming weeks or I could find myself getting frustrated pretty quickly. Patience, I guess...

Anyhow, cameras might be likened to cars. After you get one, you take it out and really see what it can do.

Vroom vroom!
Posted by Paul at 7:50 PM No comments:

Every once in a while, we all find ourselves looking at somebody famous and thinking they look like somebody who is also famous.  We all do it, right?

The list goes on and on and on.  (We could also add Mitt Romney and Lance Armstrong, but that is a story for another time...)

A few weeks ago, I was sure I had a new one.  John Kerry (post-plastic surgery (otherwise known as Version 2.0)) and Odo from Star Trek: Deep Space Nine.  Sure enough, somebody beat me to it.   (Please note they beat me to it years ago!  It has only gotten worse.  Kerry *IS* Odo. There is no other explanation!)

So tonight, I figured out what was bugging me.  That Raul Ibanez guy from the New York Yankees. He is the only Yankee right now who understands a baseball and the mechanics of actually hitting one when it is flying at 90mph. 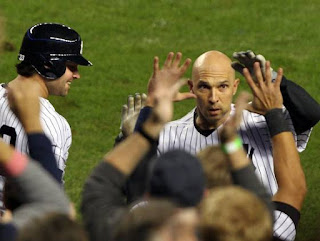 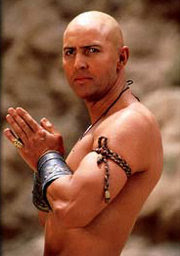 Specifically, he is Imhotep, a high priest from Ancient Egypt.  All this might explain why he is the only Yankee who can actually hit the damned baseball.  Sure, he secured various body parts from people in 1999's The Mummy and could have ended up looking like anybody, but this him.  Now he is just in a Yankee's uniform.

In all fairness, I was not the first to see this similarity.  Somebody beat me to this one, too, but only by a few days!

Interestingly enough, in the movie, Imhotep had an irrational fear of cats.  It was something about them being guardians of the underworld.  Detroit Tigers.  Cats. Hmm.  Something is not adding up.  He should be striking out, right?

Tonight, we'll see what the "cats" can do. Maybe they'll take this god-like fellow and banish him back to fiction where he belongs....

(Spoken as the fair-weather fan that I am, I predict the Tigers will win in overtime by shooting 2 under par. You just wait...)

The One That Got Away

If you have ever talked to a fisherman, you know they are an enthusiastic bunch.  They'll talk endlessly about anything related to fishing.  This bait. That lure. How to properly use a noodlerod (there is such thing, by the way. It is not to be confused with a lasagna rod - that has not been invented yet).

Any how, as I'm sure you know, they are prone to talk about "the one that got away."  It always seems to be so damned big, too. It is never an average fish.  Always state-record size, or even World-record size. Hell, maybe Universe-record size, if such a thing existed.  But no matter what, *big* seems to be the common denominator between all fish stories exaggerated.

So today, I opted to bow out of the hawkwatch and walk the trails with my finicky camera in hand (that is a story for another time).  With swarms of Yellow-rumped Warblers on the trails, I was hoping to snag another good pic or two.  Exactly 2 years ago tomorrow, I snagged one of my best photos ever.  One can always hope to top it, right?

I found myself more or less in the center of a good-sized flock.  Butterbutts (the Yellow-rumped Warbler nickname) were numerous while a few other birds were mixed in.  One was a Black-capped Chickadee. With a swing of the camera lens and the hammer of the shutter button, I confirmed that photographers and fishermen have some things in common..... 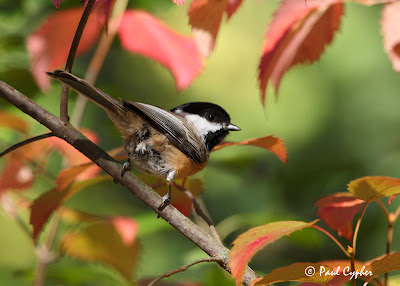 All in all, this is a fair photo in my opinion.  Nice shades of green in the background mix well with the red leaves. The bird has a bit of dynamic pose while he stares me down.  Okay, you can see his little pooper, so maybe that is not so exciting to some.  But it works for the most part.

So was is the problem?

Depth of field. Damn it. It will get you every time.

If you look close, the parts that should be focus, aren't.  The eye. The beak. The head, in general.  The body is in focus, but the tail and head aren't.  Honestly, tails don't matter to most.  But, damn, the head.  It is too soft.

Between the three major parts seen - head, body, and tail - the head is the most important of the three. If the others were fuzzy but the head was crisp and sharp, I would be so much more happy. As it is, his butt is in focus, but not his eye.

So, after enjoying my walk and checking out my photos here at home, I realizedI now have my own "one that got away" story.  Except it is not a giant fish from the deep.  It is a little black and white seed-eater showing me his butt.