Yesterday, I had the opportunity for a quick walk at Lake Erie Metropark. During my travels, I found myself viewing the spectacular red flowers known as Trumpet Creeper. Big, red tubular jobs, they say "come to me, hummingbird!" very clearly. So, I decided to park myself there for just a moment. Two moments later, a Ruby-throated Hummingbird showed up! It was not a male. It so happens many birds are named for the appearance of the male, and the Rubythroat is one of them. This bird did not have red throat, so its not an adult male, right? Well, crap. Now what? Adult female or young of the year? As I started to ponder the question, it shot up into a sycamore tree, hovered ever so briefly and then parked itself into a nest!
Question answered! It's a mom! 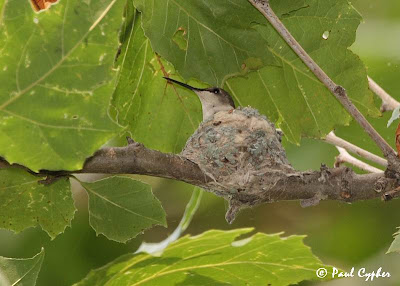 Today, I managed to get back there and, with some effort, relocate the nest. It took me a few minutes even though I basically knew right where to look. Its not much bigger than a shotglass. Its construction is amazing. Basically, its made of spiderwebs packed with lichens. The cups-shaped depression is filled soft plant fibers. You might think of it as mortar and bricks with a fleece liner. But, spiderwebs can stretch. So, when the little ones hatch and grow, the nest may actually stretch a bit to accommodate them.

That brings us to our next question: when can we see little ones? That depends. We know that incubation last 16-18 days, but I have no way of knowing when she laid them. There should be two eggs, by the way.
I think it is also worth noting that this may be the same female that nested in this tree in the past. I never saw the previous nest, I know it was there. Apparently, researchers have noted the idea that females will use the same tree year after year. They cant use the same nest, however, simply because winter will blow them apart. So they rebuild in the same tree.

You may have noted that I did not mention "dad" at any point. If the male Rubythroat were a human, our society would not have nice things to say. His role in this is nothing more than that of, well, ... nevermind. She deserves a gold star from conception forward. She does all the work.

I will certainly check on her in the coming days.
Posted by Paul at 9:16 PM

Great pic and description Paul! I had no idea birds could build nests out of spider webs. - NEAL