In life, one often has moments that are memorable.
Last night was certainly a memorable moment: I HAD MY 500TH SPECIES OF BEER!

I thought it would be good fun to have a milestone beer at the Oak Cafe. It is only a few minutes away so friends and co-workers could easily attend. Plus, they have a stunning selection of beer. A nice atmosphere is a fine thing, too! I had been there on a weekend evening many years ago and the place is just insane. So, I thought a weekday evening would do the trick. At least 20 people were there. The more the merrier! 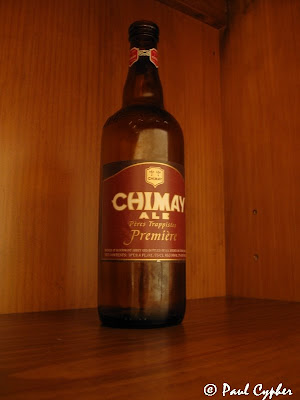 I actually ordered two different beers before I found one they had in stock. While I could have gone with a number of beers, I opted to go with the Chimay Red or Premiere. I have had the Triple Ale and the Blue before, so this completed the trifecta. I admit, though, that my notes were not complete and I needed the help of both the server and a beer guy who was there to get me through. I certainly did not want to have a goof on my 500th beer and accidentally order I beer I already had!

In short, the Chimays are brewed by Trappist Monks in Europe. Basically, they eat, sleep, and pray. As a result of the their celibacy, they need other things to do with their free time, so, they brew beer and have been doing so since the 1850's. With a century and a half of experience, the final product is pretty damned good.

All in all, it was a great beer. The color was a deep brown. I botched the pour, so the beer did not develop much head. The smell of spices was clear. On the palate I thought it was a bit creamy with a subtle combination of fruits and sugars. The finish was dry and lingering.

The bottle was rather large, so I made sure I got some extra glasses and gave some sips to some friends. All agreed: it was a fine drink.

The bottle now proudly sits on my display shelve next to my Mason duck decoy, civil war bullets from Antietam, a post-Civil War bayonet and a sailboat made from whale baleen (you can get one too in Barrow Alaska!). Okay, I'm eclectic.

I also had a chance to polish off #501. A co-worker was there and insisted I have the the Third Coast Ale from the Kalamazoo Brewing Company. In fact, he insisted that I should have it for my 500th beer, but I opted out. So, #501 it was.

First things first, it is not a run-of-the-mill ale, but a barley wine. Apparently, because it is made with grains, it is a considered a beer (wine, of course, is made with fruit). In the US, it must be labeled accordingly (ie: a beer). All in all, it was obviously a beer made for sipping and drinking. It was more like an after-dinner drink. I liked it.

For now, I will simply opt out of officially giving this beer a review here. While it was good, I was distracted by the time I had it. Talk, laughter, food, drink, and all the things that go along with a night out at the bar took their toll. It was "Paul time", not "Paul-Beer Snob time".

I had a great evening. Thanks to all who made it!