When you have had as many beers species as I have, finding a place that offers new beers can be tough. For a Downriverite (is there such a title?) like myself, the Oak Cafe in Wyandotte is certainly a place to go. I met my good friend Dave and his girlfriend Cheryl there for dinner. 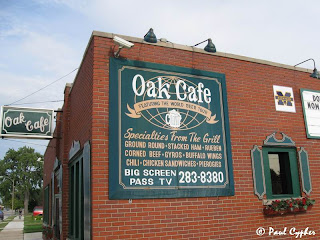 After scoping the beer list and cross referencing other brews on my PDA, I decided to have Duchesse De Bourgogne from the Brouweriz Verhaeghe in Belgium.

I was given a snifter (a special serving glass) for this beer. The color was immediately noted as a deep red brown. The head was about 1 inch thick but it was gone within 45 seconds or so.

The first serious indication of a beer's taste is the aroma actually. I gave it a gentle sniff. I immediately curled my nose up. After a few extra tries to make sure I wasn't getting it all wrong, I passed it off to Dave so his nose could take it for a test drive. He and I had the exact same word for the smell.

You have to be shitting me. Cheryl took a whif as well and she said it reminded her of decorating easter eggs. Its a 7 dollar bottle of beer and it turns out like vinegar? The smell was so offensive I called the waiter over and basically told him my beer smells like hell. "Oh, it supposed to to smell like that. Its a flemish red ale." He went on to a brief description that included words like "oak cask", "cherries", "spices" and "bacteria." I found out later - are you ready for this? - 8 month old beer is mixed with 18 month old beer before bottling.

Great. A bottle a old vinegar with my burger. 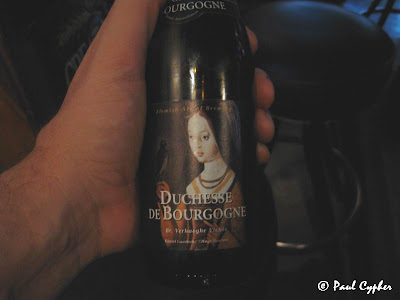 The body of the beer was not thick like a stout, but it was not light either. There was a higher level of carbonation than what I was expecting, but it was not bad by any means. Cherry was definitely noted and countered, no, it complimented the vinegary smell. The finish lingered almost forever and was very dry. Very dry. Did I mention it was dry?

At first I was not impressed, but by the time I had my third sip, I was actually starting to like it. I mentioned to Dave and Cheryl that I either can't stand it or love it. (Normally, I find beers to be mid-range on my personal scale of 1 to 5. Lots of 3s and 4s.) The 4th sip confirmed: an excellent beer. Really. 5 out of 5 for sure.

Folks, if you ever have a chance to try this wonderful brew, do it. You can leave the colored eggs at home. You wont need them.