Monday, November 29, 2010
Alarm clocks in hotels are junk.  Oh, but they have little plugs so you can wire your fancy MP3 players though junky speakers! Who cares.  I don't know why I trust them or continue to use them.  Sixty minutes after I was supposed to get up, I rolled over and noticed the problem.  Up in an instant, and out the door, the dawn flight at First Encounter was either done or a bust.  The ongoing monster Dunlin flock with a few new Black-bellied Plovers was cool, but no Dovekie.
Internet checks showed I made the right call on the Lapwing.  It was last seen....the night before...flying away.  Sure, it could show up. Keep checking.....
Head of the Meadow seemed like a good place to go for no particular reason.  More Razorbills. More distance problems...but hold on!  That group of Razorbills is far out, but this pair of birds is clearly closer and yet much smaller!  It has to be them! Black.  White.  Small! Dovekie!  Yes! Yes?  No?  Ahhh, crap.  I can't be sure.  Birders don't lie about birds (okay, some certainly will) and birders need to be sure.   Slight bits of doubt crept in.  No Dovekie officially.  Unofficially?  I'm sure of it.  I'll take brief, but excellent, looks.  Long, poor, or even bad, looks where I can't be certain of the ID don't cut it.
Fifteen minutes later, it didn't matter.   From the left, hundreds of yards up the beach, just out over the surf, two itty-bitty black-and-white birds were haulin’..  Tiny.  Moving fast.  Closer.  Still small.  Closer and right in front.  Robin-sized.  Stubby bills.  Finally. Dovekie at 80 yards.  Life bird #639.  Awesome looks. They do exist!
With a five of six key trip bird in the books (three geese species, Razorbill, and Dovekie) and no word of the Lapwing, I off for casual birding. The Black-billed Gull was clearly not going to happen unless I bumble into one.   Pilgrim Heights helped to bolster the passerine list.  This location, where the Pilgrims found fresh water before they moved on to Plymouth, turned up some trip newbies including Yellow-rumped Warbler, Gray Catbird, and Red-breasted Nuthatch.
A side trip to a lighthouse highlighted the ever-changing and the never-changing.  Let me explain.

Cape Cod, the monster sandspit that it is, is constantly moving. With the high sandy cliffs eroding way, the light house was moved hundreds of feet back from the precipice before it teetered into the ocean. (The photo with the rock shows the location of the lighthouse before  was moved.)  At the cliff edges, hundreds of feet above the crashing surf, an observation deck, about 10 feet back from the edge, clearly states not to walk to the edge. One wrong step and the ledge could crumble.  And what does one see on the edge?  Yeah, footprints.  There you have it: the ever-changing landscape highlighting the never-changing attitudes of people - “That can't happen to me!” 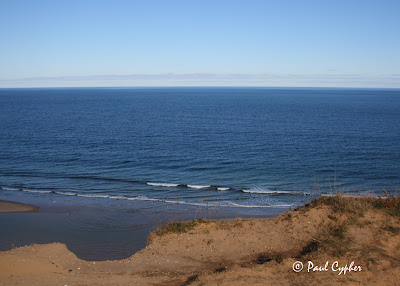 The Fort Hill Marsh area was stunning in the late afternoon light.  Swamp Sparrow and  House Finch were new additions. A hunting Short-eared Owl would have been cool if it had  flying around.   A state park up the street turned up Belted Kingfisher and Fish Crow.  With the setting sun, the GPS was set for Framingham. 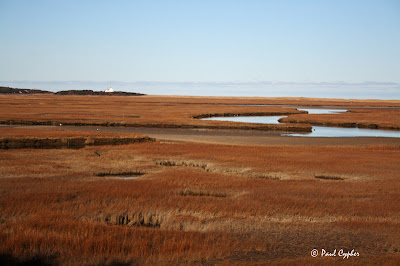 In the dark, after securing lodging, an internet report came in.  Black-headed Gull, a target bird from minute one, had been seen the day before.  On the Cape.  The location?  Not far from the expressway and the Cape Canal.  Looking back, it would have been very easy to check the spot had I known.   I was beginning my home stretch, so, given the wandering nature of the bird, it appears my chance was lost.... 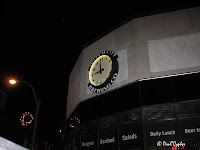 On to Framingham, I went, for lodging.  Dinner was in Waltham at the Watch City Brewing Company.  The name is a reference to the watch industry that was a large part of the local economy for decades. The little personal pizza was fair, but the beers were quite good: BeeJezus Belgain Botanical Pale Ale, Brilliant Brewnette Brune, Hops Explosion IPA and the Titan Ale (#873-876).  Sadly, the sample sizes were as stupid as the Coddington Brewing Company.   8oz beers, this time.  Dumb.  Half-full please!
Posted by Paul at 9:13 PM