Thursday, November 25, 2010
Dawn was spent racing up Cape Cod. Even in poor light, that shape of the Snipe shooting across the road was unmistakable. 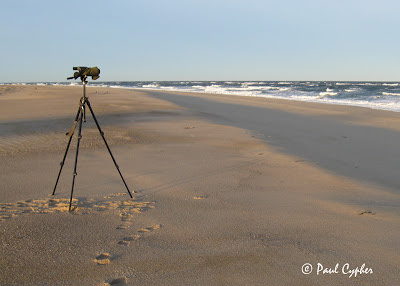 At Race Point, the northernmost beach on Cape Cod, winds were from the northwest at one million miles per hour.  Very cold. Gannets plunge-diving 100 yards offshore is incredible sight, but after about 45 minutes, I just did not feel I was seeing what I was hoping to, so I moved along the little town of Provincetown (I refuse, by the way, to call it “P'Town” like everybody else).  Most of the same sorts of waterfowl I had been seeing for days were there when I noticed a distant flock of something non-waterfowl.  Razorbills.  Dozens of them.   At one point, I realized a small distant flock never passed me by as I thought they should. Walking to the end of the pier, there they were in water not 50 yards out.  No doubt the best views yet!  Unfortunately, not a Dovekie to be had. 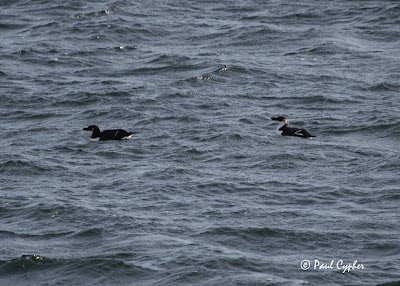 I thought it was worth it to head down to First Encounter Beach.  From the comfort of my car, I enjoyed dozens of Razorbills zipping past along with hundreds of Common Eiders (at left). Sure they were a bit far at times, but boy, are they cool.  Those single file lines just feet off the roaring waves? I could have watched them for hours.  One fellow the day before claimed over 8000 from the same location.  I don't doubt it one bit.  All the usual waterfowl where there too.  Plus Snow Buntings again.

By the time lunch came around, I was whipped.  The early starts continued to do me in even though I was going to bed at what I thought was a reasonable time.  I thought it best to move on to New Bedford, Massachusetts.  Taking the scenic route via Falmouth, I secured a long-overdue bird for the trip – Purple Sandpiper!  Common Loons were sometimes very close and cooperative, like the bird seen here.  While trying to find lodging in New Bedford I was simultaneously excited and angry to add a new bird for the trip – Mute Swan.  (After recording them, I shot them all. Not really. But, if we don’t do something soon, they are going to wreck a lot of real estate.)
Now, I know it is Thanksgiving, but does a town really have to completely close everything?  NOTHING was open. Okay, CVS.  Great, that does not help me much, now does it? Dinner?  I know what you're thinking – call a Chinese restaurant.  I did.  Fourteen of them. Really. Fourteen.   All closed. Dinner was basically cheese, crackers and beef jerky that I foraged at a gas station....right before it closed.
So, back at the hotel, I “ate” and did some journaling.  The hotel, by the way, gave me the creeps.  Huge.  I mean huge.  Almost no people.  I felt like I was the only one there and I was really getting bad vibes that I just cannot describe.  I swear, I was expecting a little kid to come down the hall on a tricycle...
Posted by Paul at 9:07 PM