Tuesday, December 1, 2010
Driving out of Albany started nice.  With temps in the 50s and light spitting rain,  it felt like a warm spring day and driving was not a big deal. As I moved along, I watched in horror as the rain increased and the temperature dropped.  Within 90 minutes, it was snowing.  Roads were getting dicey and some traffic ended up in ditches. Fortunately, by the time I made Buffalo, the weather had cleared out.  (I later learned that roads in and around Buffalo were a disaster and people were stranded on the expressway for hours and hours. I dodged that bullet!)
With time to spare and in a need of stretch, I figured Niagara Falls was as a good place as any.  First, I went over the Falls in a barrel I stole from Sam Adams Brewery.  After drying off, I birded the area around the Falls for just a few minutes. Another sharp-eyed birder who was also there picked out an immature Iceland Gull in the mist and drizzle. A great spot on her part! A loon was down there, too.  1 bah-gillion gulls in the area were made up of Bonaparte's Gulls, Ring-billed Gulls and Herring Gulls.  Maybe a Black-headed Gull, too? Who cares! I got mine! 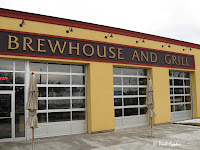 Right around the corner, Taps on Queen Brewhouse and Grill, served up two new beers and the final ones for the trip.  The Red Cream Ale (#886) and Premium Lager (#887) were a “4” and “3”.  Good stuff.  For added impact, lines of glycol(?) were wrapped around the beer line, crusting them in inches of ice. Not only was the beer certainly cold, it also appeared to be draining from solid ice. Kinda neat.
The drive through to Windsor and home was uneventful.  The border crossing was a snap but I almost screwed that up. The Customs fellow asked all the usual question and but was clearly stalling, asking irrelevant questions, and then circling back to ask the same questions again in an attempt, I suspect, to trip me up.  When he asked “How where the Falls?”, I responded with a one word answer: “Wet.”
How dumb.  Now, I was thinking about the mist and light rain that was collecting on my bins and glasses so the answer made sense to me.  In hindsight, other stupid things I could say might  have included  “I think your hat looks silly…” or “You have a funny name…” or  “Does that gun really have bullets?” or “I’m a mule.  Can we hurry this up?  I don’t have all day….” Fortunately, he let me pass even though he easily could have waved me aside and had my car stripped down to the frame.
I was home by 10:00pm and asleep my 10:00:30pm.
Mission accomplished.
So, the details of the trip (followed by a map to highlight locations):
New birds – 6
Total Trip Birds – 92 (a little low, perhaps, but remember I spent a lot of time on the ocean watching the same birds trickle by…)
Life/ABA List – 640
Maine – 80
Massachusetts - 77
Rhode Island - 34
Connecticut – 29
Total States/Provinces Visited - 9
Total States Visited (lifetime) - 42
Total ABA Ticks (sum of all state/province checklists) – 4,203
New Beers – 52
Life Beer List – 887
National Park Sites – 6
Total Cups of Coffee - 1
Astronaut Diapers Used - 0 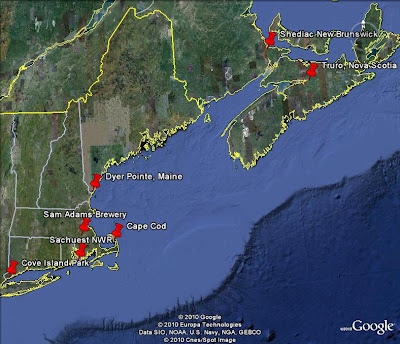 My next trip?  To be determined...

Sounds like a great trip Paul. Glad you got your target birds!

Too funny with the kid on a trike in the huge, empty hotel... :)