I suspect many of you have heard of the Titanic.  Over two thousand miles into her maiden voyage (from Enlgand to New York), she struck an iceberg and sunk. The loss of life shortly after midnight on April 14th, 1912 was huge -1,517 lives were lost in the bone-chilling waters of the North Atlantic.

Almost a century later, we are still left answering questions.  What if Captain Smith had heeded the ice warnings?  What if the ship had struck the iceberg head-on instead of that glancing blow that ripped her open? What if she had enough life boats?  Was there really a mystery ship close enough to the disaster that it could have assisted in a rescue before the Carpathia arrived?  Would there have been enough time to implement a rescue?

We are so often left with just questions...

One of the most eerie pictures I have ever seen is the one at the left.  It is said to be the last known picture of the doomed passenger liner as she steamed away into the history books (via Davy Jones Locker).  From a photography standpoint, I like it for the most part.  The ship is left of center (following the Rule of Thirds) and the horizon (though not level) is not cutting the scene into a top half and bottom half.   For me, the creepiest aspect of the photo is not what it shows, but we know happened afterwards.

Today at Lake Erie Metropark, I shot my own creepy, historic photo. 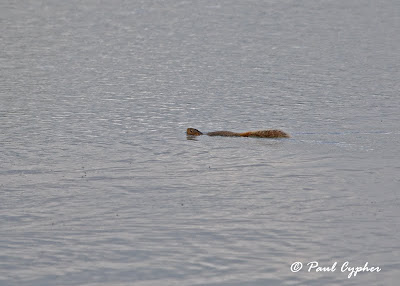 Over 250 yards into his/her maiden voyage (from Lake Erie Metropark's Boat Launch to Gibraltar), he/she got winded and sunk.  The loss of life shortly after 2:15pm on October 5, 2009 was, well, not huge - one life was lost in the "bone-chilling waters" of the Brownstown Creek.

Almost 6 hours later, we are still left answering questions.  What if the Fox Squirrel had heeded evolution and realized it was indeed a squirrel, and not a muskrat or beaver?  What if the squirrel had crossed the channel  in a straight line instead of that meandering course during the final yards of its fateful voyage?  Would it have had enough energy to actually climb up the boat piling (that it had reached!) and onto dry land before it slipped and fell to its death?  Why, with so many boats within a few yards of the distressed rodent, was there not a rescue attempt?  Would there have been enough time to implement one?

We are so often left with just questions...