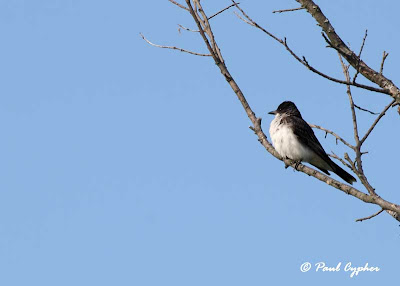 While it can be a bit more challenging in the fall, birding is every bit as exciting and fun. Sure, the spectacular colors of migrants birds are partly gone and the songs have all but stopped. Yes, the leaves are out (making it harder to find the birds), and the swellings from mosquito bites resemble small tumors. But so what, right? Get out there and enjoy it!
I have!

Since Sunday, I figured I have walked over 10 miles at between Pointe Mouillee State Game Area (6 1/2 miles in one afternoon) and Lake Erie Metropark (1 or 2 miles on at least 3 three separate days).

I can say for certain that I have recorded 95 birds species in that time. Highlights of my week might include...
...12 species of shorebirds including Baird's Sandpiper, Marbled Godwit, and Wilson's Phalarope
...15 species of warblers including two different Hooded Warblers
...7 raptors including an early Broad-winged Hawk (seen on August 23rd)
...two different Common Loon fly-overs (maybe the same bird twice?)
...a young Peregrine Falcon landing on a mudflat less that 200 feet away after making repeated attempts to nail an American Avocet. If you go here, you can get an idea of the look we had through out scopes. Absolutely breathtaking.

And to think September isn't even here yet!
Posted by Paul at 8:45 PM