World War II saw a huge increase in technological innovations. Some nations, like Great Britain, were flying biplanes at the beginning of the war. But as the months ticked by, aircraft became faster, more powerful, and simply more deadly. 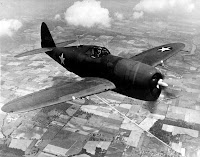 Take the P-47 Thunderbolt, for example. Fully loaded and ready to go, the "Jug" weighed almost 8 tons. Top speed? 433mph (a 2,000 horsepower 18-cylinder Pratt & Whitney engine tends to move things along). The operational ceiling was 41,000 feet. Give it an external drop tank and its range approached 1900 miles! That is a lot of flying! With such high performance stats, no wonder it was called upon to escort bombers deep into the heart of Germany.

Oh. What about the firepower? Eight...count 'em...eight 50-caliber machine guns. Many American fighter craft carried six, but eight? That would tear apart even the toughest German planes.

Sad to say, that firepower might have been the namesake for the Thunderbolt Wheat brewed by the Warbird Brewing Company in Fort Wayne, Indiana. I don't mean that in a good way.

It poured rather clear (many wheats, so far as I can tell, pour a bit cloudy from all the yeasts in the bottle.) The color was also more of a paler yellow. I was expecting something a tinge darker. The head was white and maybe 1” thick. No big deal there. The aroma was not much to be had. There was certainly something there, but it was hard to pin down. I was looking forward to the taste, but all tastes were shredded by the eight 50-caliber machineguns hidden in the wings of the beer. Holy cow! I know I have described other beers like this, but it applies here too - the carbonation is akin to drinking a Coke. All taste, if there was any, goes down in flames. The acidic, burning feeling paralyzes everything and you are left with that feeling of "Oh my, this had better go down the hatch right now as it is burning my mouth. Where is my parachute?" Once my mouth was clear of the beer itself, and my taste buds got airborne again, they were cluttered with a pasty film that masked what I assume was a subtle citrus taste.

All in all, this beer, while named for a wonderful aircraft, is not wonderful. It looks fair at best, struggles to get airborne, has mid-air complications, and crash lands short of the runway. I think the engineers need to tear it apart, re-tool it, and try again.