Well, I'm back.
It has been an amazingly long time since I have bored you to tears with stories of birds, beers and other nonsense. For the six of you that read this, you might have been wondering where I have been since my last post (mid-February!).

To summarize things, I got a chance to spend a few days in Dorset, Ontario. This town (blink and you miss it) is on the doorstep of Algonquin Provincial Park. Why I was there is not really important for purposes of this blog, but here are some highlights... 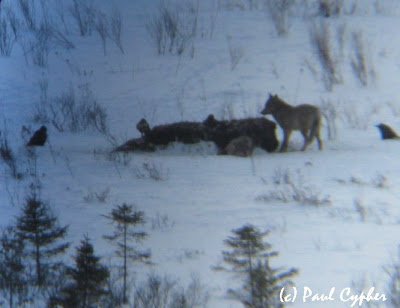 The wolf situation was especially cool. To make a long story short, a moose was struck and killed in the park. It was eventually helicoptered and dumped into a field about a half a mile away from the Visitor Center. Through spotting scopes, visitors were able to see two wolves chomping away. The photo (at left) was taken with a itty bitty point-and-shoot using a spotting scope as a telephoto lens. Sure, the image is horrible, but you get the point. There are, by the way, two wolves in the image. One is curled up in front of the moose on the right side.

...a few new species of beer. The beer list now stands at 552 species. A highlight was reaching the 550-threshold. Whew! That honor goes to the Black Oak Nut Brown from Black Oak Brewing Company. Very dark, but not black. Chocolate and roasted tones in the nose and very well balanced feel on the tongue. Very good stuff. 4 out of 5, for sure!

Unfortunately, upon my return, I developed Bubonic Plague. No, really. Chills, body aches, high fever (in my case, 102 degrees), and one killer headache. Oh sure, the books always talk about big ugly swellings in your armpits (buboes, they are called, which I did not have), but that only happens in 70% of the cases. Some people will tell you the fleas that carry it wouldn't really be found in the sub zero temps of Ontario in February, but it had to be. Yep, the plaque. Recognizing that I never saw a doctor and I want to have something better than just the flu, I will stick with the plaque. It has a better ring to it.

Now that I am back home, and feeling better for the most part, I hope to get back into the swing of things.