A birthday dinner for a friend was great reason to venture off into the city of Detroit this past Friday night. With daytime temps pushing 70 degrees, it was almost like a summer evening on the town. I'm serious. We both thought it would be good fun to get back to Detroit and see what the town has to offer.

The GPS got us to our destination without any trouble, but man, the drive there was not pleasant. 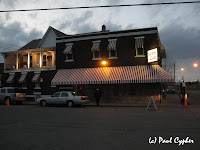 Abandoned buildings at every turn. Piles of concrete were things once stood. "Urban decay " would be an understatement. "Post-nuclear apocalypse" would be more like it. Then, at the end of the street, sat the Roma Cafe. The building was originally built in 1888, became a restaurant in 1890, and still stands on the original grounds (a few blocks north of the GM HQ and right by Eastern Market) serving some of the best Italian food in Detroit. What a gem! Yes, you heard that right, a gem in the middle of a wasteland. And, valet parking to boot!

Of course, the little girl on the tricycle was straight out of a freaky movie. Imagine a scene right out of Terminator. Total urban destruction, and yet we see a kid on a tricycle! We did not see a house for blocks, and yet a little girl was riding down the street calling out to mom! Sure, that appeared to mom on the sidewalk a hundred yards away, but geeze!

Upon checking in, the hostess gave us each a tub of grease. We were expected to lather ourselves in this stuff so we could squeeze our way between the seats to our table. The table arrangement was nothing short of a fire trap. I have NEVER been to a place with so many tables crammed into such a small room. Okay, there were no grease tubs, but this place was not for anyone who has even the slightest hint of claustrophobia. Very, very crammed seating.

But the meal made it all worth it. Pasta with peas in a cream sauce? Strawberry Shortcake for dessert? What was there not to like? I'll definitely be heading back. Our waiter, by the way, looked like Powers Booth with a handlebar mustache.
After dinner, it was decided we should head off to one of three locations: Motor City Brewing Works, Atwater Block Brewery, or Detroit Beer Company. DBC got the nod.

Now, granted, I had been there twice before, so I knew generally where it was. But, "generally" isn't the issue when you have a GPS, right? I input "Brewery" and it could not be found. I had, unfortunately, used the wrong word - "brewery", not "beer" (I found this out after the fact). So, after taking at least 20 minutes of driving around, we found the place. I will, by the way, deny that I blew two red lights and a stop sign in that twisted, ridiculous mess. Whoever is responsible for the layout of those streets should be shot.

Once we settled in, it was time for beer #553 - the People Mover Porter. First, kudos to the brewers for having a name with a local connection. I love that! But, what in the world is the People Mover? Simply put, it's an automated train on a 3-mile loop that meanders its way through downtown Detroit. Ever since it opened (1987) it has never really lived up to expectations. A common complaint is that it only takes you around town, but never gets one in and out of town. You still have to get yourself to Detroit and then perhaps this system could get you to the other side of town once you are there. Few people really use it.

How about the beer? In my opinion, the carbonation was way too high, and the body was not thick enough. I was expecting something more creamy. Chocolate tones were obvious in both the aroma and palate, but almost seemed to overpower everything else. The finish was dry. No, not dry. Way dry. Very dry. Did I mention it was dry? 2 out of 5.

So the night, while spent with wonderful company, was really quite peculiar. We enjoyed an old place in the middle of a scary future world and I had a beer just like it's name sake: it didn't really take me anywhere.