I have a friend who knows Dave Bing. Really. Dave Bing. If you're not sure who he is, here is a clue. And another one. So, as you might guess, he follows Piston's basketball and has really good seats. Or, he knows people who have really good seats. You can see where this is going, can't you?
After experiencing my first ever Wings game a few months back, I kept the trend alive and got a chance to take in my first ever Piston's game Friday night. We were only about 15 rows back behind the visiting teams bench, courtesy of connections via Daaa...um, .. 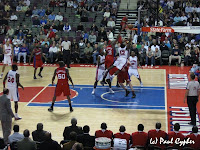 During the second quarter, things were no looking good, but by the end of the of the first half things were starting to turn around a bit. Maybe Coach Curry took my advice? Final score? 108-90. I'll take the credit for this one, too. Still no consultants fee. 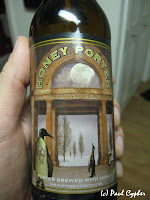 As I right this, I am enjoying beer species #555 - Honey Porter from the Motor City Brewing Works. While the meaning of the penguin on the label is a mystery, the beer isn't. I think it would be fair to describe this porter as almost typical. Dark, almost black with a tan 1/2" head. You probably knew that. Malty aroma? Yeah, you probably knew that, too. But, maybe the strong chocolate and sweet aspects of the aroma would catch you off guard. It did me. Pleasant body with a good balance. Dry finish. The honey seemed to straddle the taste and finish. I think it might be what made this a porter that is indeed different from the rest. Not "super crazy wow!" different, but certainly not your typical porter, either (so far as I can tell). Not a bad beer, I guess. 4 out of 5.
Posted by Paul at 8:24 PM