Recognizing hours needed to be killed before the afternoon's big event, my parents and I had breakfast at what can only be described as the second coolest place in San Antonio (after the Alamo): the Menger Hotel.

While built in 1859, it still functions as a high-end hotel in town. In the past, I have been there for breakfast so I knew I had to get back. The Eggs Sardu (poached eggs with spinach and artichoke hearts on a muffin) were simply awesome. After breakfast, I used the time for some shots on the grounds of the Alamo. Still mighty damned chilly!
By 3:30, everyone had assembled at the Alamo again. Sure, the birds, the beers, and the battlefields were cool, but that was a side-trip (a very cool, very fun side trip, but a side-trip nonetheless). The real reason for coming down was to see my sister officially retire from the United States Air Force.

Beginning in 1988, her travels took her from California, to Texas, back to California, down to Arizona, up to Alaska, back to Texas, across the oceans to Iraq, and then back to Texas. That's 20 total years spread out over 6 duty stations, including a war zone. During that time, she managed to earn her Master's Degree as a Perinatal Nurse Practioner, and knock off some research papers and even write a few book chapters. As if that wasn't enough, over time, she became a nationally known expert in fetal monitoring, legal issues, and high risk conditions during pregnancy. Along the way? Multiple awards and honors, including nine military decorations.

It wasn't until the Colonel spoke that I truly, after 20 years, understood the magnitude of what Rebecca had done. I don't recall the exact words, but she basically said that Rebecca's work will be a part of Air Force nursing for the coming decades. Decades, folks. Very cool. Some nurse in the year 2067 will be following protocols that my sister established. A lawyer in 2052 may use a case that my sister testified in as legal weight during a trial. For some of us, working for "the now" is cool. But, for some, working for future generations is important, too. When your "now" work helps future generations do their job better, that strikes me as the best of both worlds. (The same Colonel pulled me aside later and basically "Brag about your sister's work!" She meant every word of it.)

We are all very proud of you Rebecca! Thanks for the flag, too! 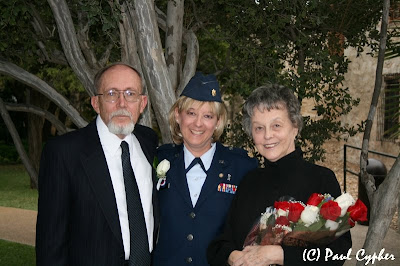 After a quiet dinner reception back the hotel (where conversation constantly hovered around labor and delivery...gee, I wonder why!), alot of us (including many of my sister's nursing crew) headed off to Howl At The Moon, a dueling piano bar on the Riverwalk. Yes, people, I partied with a bunch of nurses. All urban legends are apparently true. Yes, photos exist of the evening, but you won't see them here. Careers are on the line...theirs,not mine! Okay, it wasn't that crazy, but, yet, it was nutty, yes, photos were taken, and no, you won't see them. To the best of my knowledge, there were no fatalities.
Posted by Paul at 7:56 PM

Did you tell the colonel that your sister is AFRAID OF GRASSHOPPERS?!?

Congrats to her, anyway!

Yeah, okay, you're right. Grasshoppers give her the creeps. At the ceremony, they also commented on her super organizing skills. All the while, I was chuckling because I knew she was almost late for her own retirement ceremony because she forget some uniform parts and had to go home and get them!