The morning of the 20th (my final day in the Valley) was a morning of frustration. I had noticed the sunrises were awesome every morning. However, I had made birding my priority so I didn't do much with landscape photography. I opted to head further east to the Palo Alto Battlefield National Historic Site outside of Brownsville. Open ground. Great light at sunrise. Cannon and flags for subjects. Could be cool, huh?
Well, it would have been cool, I'm sure, if the place was open! I was there by 7:15am, but they didn't open the park until 8am! Now, a lot of parks like this ARE open at sunrise, where it is visitor center that is closed. Not the case here, apparently. So, I was literally stuck at gate until someone came to open up. Unfortunately, there were no photo-ops from the gate.

The open, flat ground was perfect for an artilerry duel and that is exactly what happened on May 8th, 1846. In short, the Americans shot the Mexicans to pieces in the opening phases of the Mexican War. This two-year engagement helped to shape the history of the United States. It also helped to shape the list of birders! Without a victory in this war, much of the United State as we know it (New Mexico, Texas, and California) would quite possibly have remained northern Mexico!

I also hoped to snap a few photos of the White-tailed Kites I knew would be there. They were, but I wasn't ready for them (I was geared for landscape stuff with my small lense). I did the best I could before they flew off. I did get to see a Northern Harrier/Kite dogfight. Despite being heavier and larger, the Harrier out-flew the kite, hands down. Very cool to see.

After some battlefield putzing, I needed to head north to San Antonio. After my arrival back at the airport (4 hours), I met up with my sister, Rebecca, and my parents, who had just arrived on their flight from Detroit. After getting settled into the La Mansion Del Rio (where I had a great room with quite a view), Becka left to take care of business, while the rest of us went out to dinner.

Pesca on the River is just not what I thought it would be. Sure, the place was nice. Sure, the staff was great. Sure, the food was good. But, yes, it was all more expensive than it should have been. Sorry folks, that is just the way it is. The beer, Fireman #4 (#518), from the Real Ale Brewing Company, in Plano, Texas, was a spectacularly average attempt at a blonde ale. I thought it was a pilsner, it was so light.

The Alamo, a hop, skip and jump from the Riverwalk, proved to be fun for some night photography. Despite temps in the low 40's, we did it anyway. There it stood. THE symbol of Texas and her independence -the place where Jim Bowie, William B. Travis and John Wayne died so Texas could be free. Contrary to thoughts of many, most of the existing Alamo is not original to the 1836 siege (including the top part of the chapel's front wall!). Nevertheless, for a history guy, just seeing such an iconic peice of history right before you is awesome, even if it is a lot smaller than most people realize. 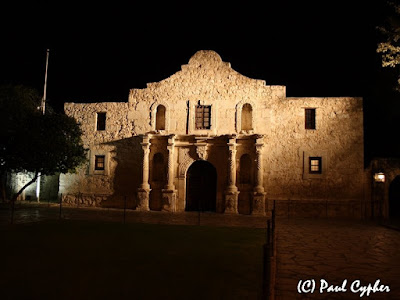 No bike to be found :( For that matter, I didn't find the basement, either. I'll try harder next time. It has to be there somewhere!