After another super breakfast at the Menger (Eggs Sardu!), I opted to head over to the San Antonio Zoo as a solo trip (mom and dad were relaxing while Becka, well, she slept in a bit). After the bus boondoggle that killed an hour (the bus was running the wrong route!), I made it. As a former zoo guy (this is going back a few years), I am always good to wander a zoo now and then. I found it a wonderful place to practice some photography. Alot of professional recommend such a thing. I will never be a professional, but I can see their point. The Bateleur shown here was about as cool as they get! 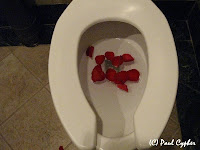 My hot dog and chips lunch was nothing more than an attempt to hold me over until dinner. Becka made arrangements for dinner at Bohanan's, a premiere steakhouse in San Antonio. Huge steaks, a splendid wine and beer list, and rose petals on the tables and in the toilet bowls. Yup, the crapper, folks. The picture is the real deal. Not faked in any way.

The quail stuffed with rice and shitaki mushrooms was extraordinary. I played it conservative with the beer and order a Chimay Tripel. You can't wrong with that for fine dining. It was on tap, for Pete's sake! But, I almost ordered another beer that was also on tap. The name slips my mind at this point, but the cost of $80.00 per glass was enough to make anyone think twice. Of course, I admit, if I did not run up a triple digit bar tab howling at the moon, I would likely have ordered it. Not many people can say they drank an $80 beer. (Of course, not many people WANT to drink an $80 beer!). The after-dinner coffee was an organic Galapogos Island Estate coffee. I really have no idea what the details are behind this coffee but it was pretty good. If nothing else, it sounds impressive, huh? Perhaps some of my coffee friends can enlighten me.
Posted by Paul at 8:59 PM

Wow! The petals bring a whole new meaning to the "smells like roses" jokes. Next time I get roses I can guarantee I'll be thinking about this toilet picture!