With the overnight rain easing up in the morning, we hustled to break down camp and make fresh coffee.  The plan was to have a nice cup ‘o mud with breakfast while viewing Lake-In-The-Clouds (again). Sadly, the weather created Clouds-Over- Lake-In-The-Clouds; the whole area filled up like a bowl of white soup .

With rain setting in again (it was a short respite), we geared up nonetheless for a hike to the Nonesuch Mine. Tucked away in the corner of the park, the mine ran five different times under five different companies.  The region around the mine became a little town of 300 people or so.  By 1912, the operation had been abandoned permanently.  Frustratingly for me, with the rain, photography was not going to happen. What a drag. The old, stone foundations (some at least 15 feet tall) still stand. With the lush green plants and mosses, the whole place was like a trip to Middle Earth. Nat and I were almost waiting to see Gandalf walk by. Or perhaps an evil orc. Um, I mean an evil orc.

Birding on this trail could have been nice, but the rain kept things quiet.  A Scarlet Tanager and Mourning Warbler were the best birds.  A Pileated Woodpecker flew overhead.


A pleasant hike along the Beaver Creek Trail was followed by at least two hours of dinkin’ around at the mouth of the Presque Ile River.  If you like waterfalls, this place is a must.  Mandido Falls (I now have forgotten the name origin)and Manabezho Falls (named after the Native American spirit-god  who once had a conversation with his own anus (I’m serious)) are both easily accessible.  Bring a camera. Bring a tripod. Have fun. Forget the birding.  It was too loud. 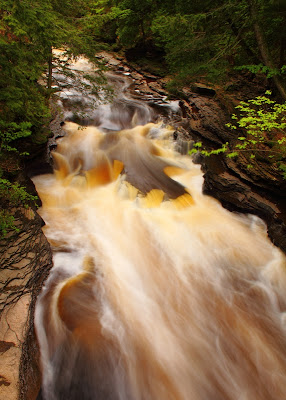 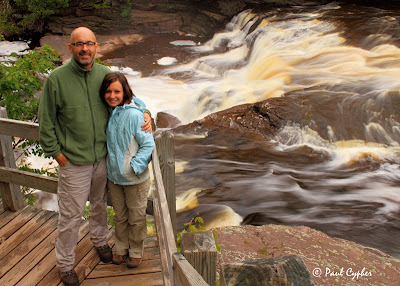 Speaking of fun, the American Toads were loving this place.  You could hear them calling and, in the various locations, depressions in the layered shale had filled with water.  Voila.  Instant breeding pond.  In other spots, one could easily see where baby toads come from. This image has been edited so that individuals under the age of 21 won’t learn anything. 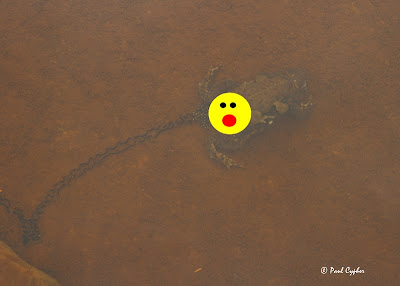 While an entire day could be spent here alone investigating every nook and cranny, it was time to press on. Hard as it was, we made our way west along Route-2 into Wisconsin.  Domestic Diva Natalie crocheted a hat as we went (she forgot to pack one).  Lodging was secured at a hotel in the town of Ashland.

Dinner was at one of those peculiar little places.  Take a building and section it out into three rooms.  The left room is the low-key eating room. Let’s call it The Alley. The right room is the food-snob eatery. Let’s call that The Grille.  The brewery that connects the two in the middle is the South Shore Brewery. 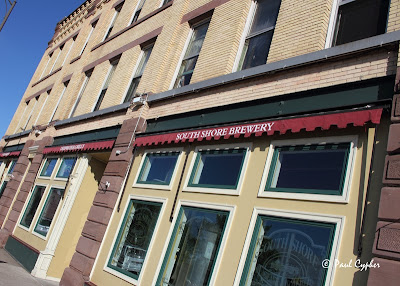 We’re not knockin’ this place.  It is just that the physical layout was a bit odd. In any case, the pizza was outstanding. The beer was good, too.  Bavarian Wheat, Nut Brown Ale, Honey Double Maibock, ESB and Rhodes Scholar Stout (#1455-1459). My notes suggest the Maibock was the best of the five, but not by much.  No major whining here, but no earth-shattering stuff.  The beers?  “3’s” across the board. In any case, a fine meal. 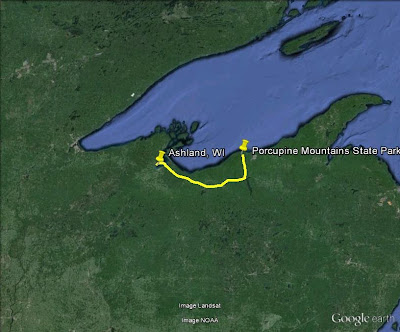