The whole Finland thing was just odd. Not only did we bumble into the place a few days previous, but we bumbled back to town for camping.  To make it even more odd, breakfast was in the same diner as lunch a few days previous.  No Sarah Palin.  Perhaps it’s a sign of the times, but all the older fellows at the bar stopped in mid-conversation, turned to face the door and did the Pledge of Allegiance to the tiny flag that was tacked to the wall.  The Pledge is certainly not odd, but the whole scene was. Trust me.

Shortly after breakfast, we were busting it down to the shoreline and back to Gooseberry Falls. (We did not have time for it the first time through.)  Continuing our theme of saving wildlife from imminent road death, this toad seemed a bit grumpy when we removed him from the walking path.  Oh never mind - they always look grumpy..... 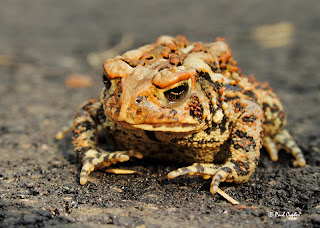 For you waterfall photographers out there, this place is a must.

Actually three separate sets of falls, the Gooseberry River puts on quite show. Not only do you have a grand view but it is easily accessible from the Visitors Center. Once on site, you are basically free to rock–scramble and do you what you want. Sure you could slip on the rocks,  bust your melon open, and show the scars for the rest of your life, but if you pay attention to what you are doing, you can have quite a bit of fun. 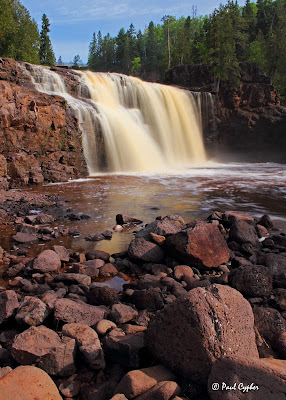 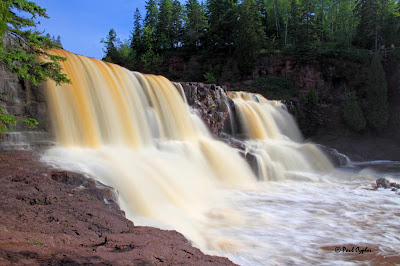 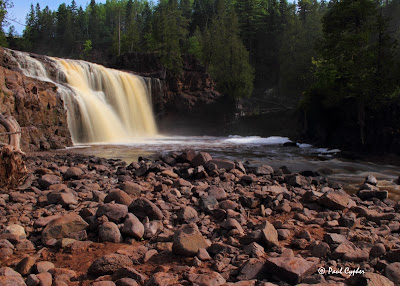 It is my fondest wish to return here and photograph this place the right way (whatever that means).  Early.  Nice light.  No people.  Maybe someday….

A pleasant hike followed (people were starting to arrive and goof up my shots).  Mourning Warbler was confirmed as were black Woodchucks. Really. They are black. We had to ask staff what they were.

Following a short lunch at Temperance Falls while enjoying the Bitter Neighbor IPA (#1466), and fending off food-grubbing chipmunks, we knew we needed to start driving.  It was actually hard to leave.  The Lake Superior shore of Minnesota is to be treasured. If you have not been there, do it.

Following the uneventful border crossing, we pressed on to Kakabeka Falls.  Rooted in Objibwe for “Waterfall over a cliff” (those crafty folks….), the falls are formed by the Kaministiquia River (Kah-mih-NIST-oh-kwa) as it pours over the Canadian Shield.  That some odd rocks, folks.  Sadly, the lighting sucked. Bad.  To make matters worse, the hottest temperatures of the trip were here.  Flesh was melting. Okay, not quite, but close. Easily 90 degrees. (Long gone were the chilly days of Michigan's Upper Peninsula.)  To celebrate the chill, the next item on our menu was hot spaghetti. Yeah, great.  We discovered cold beer can help immensely.

When the evening cooled a bit (only plastic was melting at this point), we went back to the falls (they are THAT neat) and later birded the campground. Sadly, this was an episode where my camera geared failed.  With a Yellow-bellied Sapsucker nest feet off the road and less than 10 feet high, I failed to snag a solid photo. The flash was just not cutting it.  To add insult to injury, the bugs were a bitin’, as the black flies had put in an appearance that was only one step below the devastation of the Porcupine Mountains.  (By now, I was really getting tired of those little bastards.) Mosquitoes were in force, as well, so I couldn’t really concentrate. Composition blows. 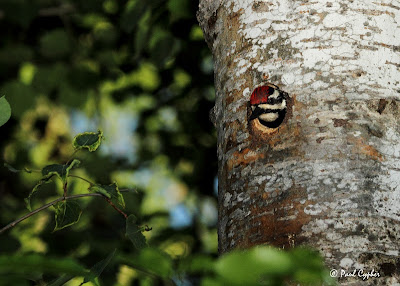 By sunset, we were pooped.  Nighty-night….. 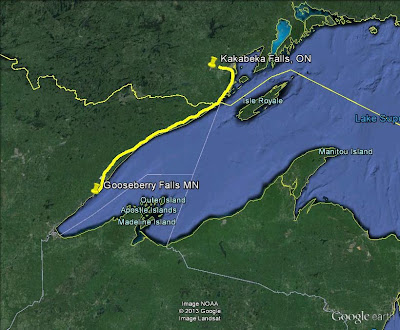