A few days, a friend of mine and I had a chance to split a killer beer.  It wasn't until I checked my "This Day in History" iPhone app a day or two later I realized how odd of the whole situation was.

Life and Limb (# 1,106) is an oddity in the beer world so far as I can tell.  Rarely, at best, will two brewers get together for the common goal of brewing something awesome. In my limited experience,  Infinium is the only other example that comes to mind right now. 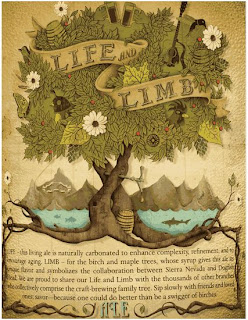 A cooperative effort between the Dogfish Head Craft Brewery Inc. and Sierra Nevada Brewing  Company, Life and Limb basically defies description.  When this beer was brewed in 2009, it sold out nationally in two weeks.  They recently brewed it again.  While officially an American Strong Ale, we found characters that spanned the spectrum of beer.  Apparently, they set out to brew something totally different. They did.

First, the bottle was corked.  Too cool.  Visually, the beer was basically black.  Swirling it around in the snifter allowed it to coat the glass nicely before it slowly slid back down.  You could almost feel the creaminess with your eyeballs.  Dark fruits, dark sugars (like molasses or brown sugar), and the alcohol (10.2%) were easily noted, too.   Interestingly enough, I SWEAR I was getting a hint of bubblegum in there. I can't describe it.  Realistically, it was likely a combination of the birch and maples syrups that were added.

The taste, admittedly, was a step back from the aroma. I am not telling you it was bad.  It was excellent. But with the wonderful aromas, I was hoping the beer would taste as good as it smelled. It didn't. You might think of it like a touchdown vs. a field goal.  7 points as opposed to 3 points. Both are good, but one is certainly better than the other.  While it originally struck me as being similar to a stout or porter on the tongue, it slowly changed to something more like a barleywine.  It is not very often that I find myself drinking a beer that changes styles as I go.

All in all, I found the beer to be very enjoyable.  Four out of five.

So, it is with a heavy heart I bring the second part of the story.  If you read the title, you have to wonder about the Flood.  The biblical flood?  No, that never happened.  The tsunami that struck Japan a few months back? No, that is horribly serious.
I am talking about the London Beer Flood of 1814.
Okay, it is not as serious as the tsunami, but it is every bit as awful.  This past Monday was the anniversary.
The Meux and Company Brewery, established in St. Giles, a low-end district of London, was the scene.  On October 17th, 1814, one vat,  containing thousands of gallons of beer, ruptured.  The force of the free-flowing brew ruptured the other vats.  Within a few seconds, almost 387,000 gallons of beer swept out the door. 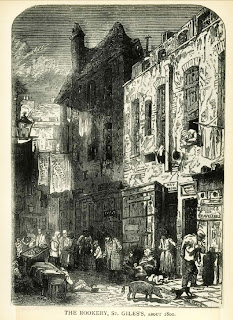 We need to put that in perspective.  Forget visualizing gallons of milk or bathtubs.  Lets think swimming pools. An Olympic Pool is 6.5 feet deep, 164 feet long and 82 feet wide (2x100x50 meters).  That gives us a volume of about 660,000 gallons.  Lets make the math easy and say half the pool is beer.  Check the picture below.  Now you're thinkin'..... 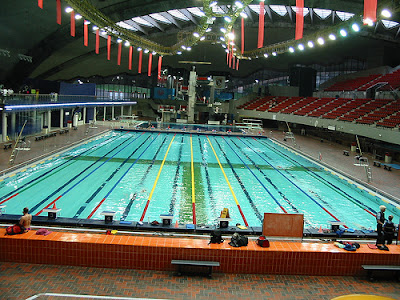 With half a pool of beer flowing out the door, everything in the way was crushed, shoved aside, or carried away as debris.  The low end district has poor building conditions.  Two buildings collapsed.  One wall at the local pub crumbled.  Many families lived in what we would call basements. Beer, like water, was seeking the lowest level and flooded the occupied low areas.
Eight people died.
Seriously.
With ages ranging from 3 to 63, some drown while others died from injuries.  A bar maid survived three hours trapped in rubble. Surely, there are other stories like hers, now lost to time.
One fellow died from alcohol poisoning. Before you think he fufilled every drunken frat boy's dream - "If I ever find myself drowning in beer, I'll just drink it all! - he apparently died a few days later.  With hundreds of thousands of gallons of beer literally on the streets, people were swarming the place.  Kettles, bottles, bowls, cups and anything else that would hold fluids were used to salvage the free booze.  The fellow probably just had too much.......

Sadly, sources don't all agree.  Some references say no one died from alcohol poisoning. Other sources say that barmaid did die. In any case, a beer flood occurred and people perished.  Ugh.

Sure, beer can be fun, exciting, and new; Life and Limb certainly was.  But I find it kind of peculiar to think I sampled a life-highlighting beer near the anniversary of a gruesome beer disaster that claimed innocent lives.