In the modern lexicon, "train wreck" has come to be known as a disaster.  I could go on and on on this one...
The economy. A train wreck.
The oil spill in the Gulf.  A train wreck.
Rick Perry as President.  A train wreck.  (I have a crystal ball. Trust me on this one.)
Ever wonder about the origins of the name?  With trains being huge and somewhat fast, the 'ole F=MA equation holds true, for sure.  Where M=mass and A=acceleration, they combine for quite a bit of force.  When big, fast things wreck, that energy has to go somewhere, right?
Maybe it was the intentional train crash in Crush, Texas that brought the concept to the forefront.  In 1896, some dolt thought it would be good publicity to drive two trains into each other at full speed.  Not model trains, mind you - real ones.  With an estimated 40,000 people watching, the two trains collided head-on at a combined speed of about 90 mph.  The boilers literally exploded like bombs.  Three people died. More were injured. 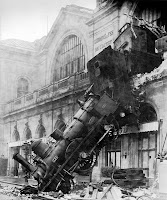 Maybe it was the disaster in Saint Michel de Maurienne, France in 1917.  Horribly overloaded with 1,000 French soldiers going home on leave, the train, short on brake power, descended a slope outside of town.  With speeds estimated at 80mph in an area engineers posted at 25mph, the train derailed.  Fires, fueled by ammo and grenades carried by the soldiers, hampered rescue.  By the time it was over, an estimated 700 soldiers were dead. 135 were buried as Unknowns.  The train's engineer knew the risk and was not going to drive to the train. Because it was a military operation, he was, sadly, ordered by a superior officer to make the run  Fortunately, the quick thinking of a station attendant up the hill likely prevented more tragedy.  Watching the train pass his station at catastrophically stupid speeds, he called ahead with warnings.  A train carrying British soldiers was delayed.  That situation woulda sucked bad.
Train wrecks. They are brutal.
That said, #1,105, Train Wreck Ale, from the Mount Pleasant Brewing Company is the farthest thing from a disaster. 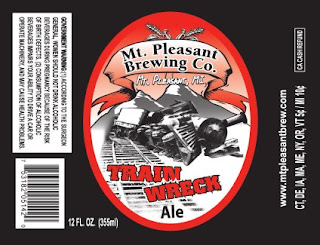 In a pint glass, the pour was a disappointment.  I'll admit that.  The head was gone before it started.  Visually, though, the amber tones looked good (it is officially an amber ale).  The nose had suggestions of a mild sweetness and perhaps a tad of dark fruit?  On the tongue, it was all smooooooth.  The hops on the tongue quickly gave to the malts. Sweet and nice.  With the hops still there, but in the background, the finish faded with some of those sweet tones still lingering.  Damn good.  Carbonation was not overpowering.  (I later learned that honey and maple syrup were key ingredients.)  An easy four-out-of-five.
All in all, the Train Wreck isn't.  The brewer has all sorts of train-oriented names for their beers.  Apparently, this name is a reference to the drinker if they had too many.  At 8.2% alcohol, an ignorant consumer could be a pile of rubble.
Watch this stuff.  Be the smart station attendant in France. Don't be the moron in Crush or the superior officer in Saint Michel de Maurienne.
Posted by Paul at 9:45 PM

I have a poster of that train hanging in my living room. Every time I have a personal moment of "F...udge my life," I just look at the poster. It reminds me that the people associated with that wreck had a much, MUCH bigger mess on their hands to deal with. Then I feel better!

I know what you mean...whoever you are. There is a saying that basically goes like this - if everyone took their troubles and put them in a bucket and could see and perhaps inherit the troubles of others, everyone would just keep their own.

I'll take my troubles any day!