October has been a bit of a drag.  Sure, we have had nice days, but many have been far from nice.  Relentless clouds.  Rain.  Pretty depressing days in general, if you ask me.
So, it was with quite a bit of joy I was able to spend my Saturday at the Hawkwatch. All of the sloppy weather had basically backed up the bird traffic.  For the better part of the day, birds were on the go. Not just a few, mind you.  Thousands.  14 raptor species total. That is a damned good haul.
Birds.  Conversation.  Photos. Even a bit of physics. Physics?  Really. Just keep readin'.
Bald Eagles put on a good show.  Sure, you can see them year-round, but isn't it nice when they pose? 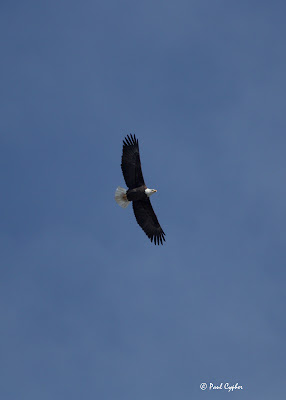 After watching thousands of Sharp-shinned Hawks saunter by over the last few years, it was nice to FINALLY secure a usable photo of an adult.  If you look at the breast, you can clearly see the orange-red marks. We don't know how old this bird is, but we know it was not born in 2011.  In that case, there would be brown streaks running down the chest.  It could two years old or eight. We can't tell. 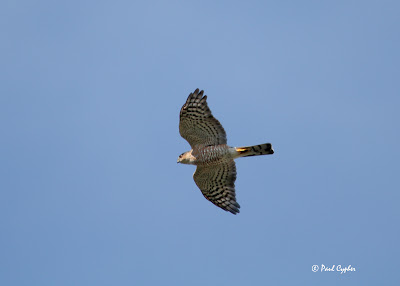 You can compare the "Sharpie" above with the Cooper's Hawk below. They age in a similar sort of way. Orange-red on the breast?  Adult. Brown streaks? A young bird.  Don't read too much into that "fork-tailed" look.  I am not sure what to make of it, but it has nothing to do with the ID. 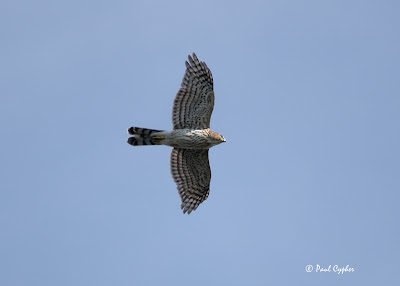 Interestingly, somebody somewhere knows a bit more about this bird than I do.  Check out this enlarged portion of the same image: 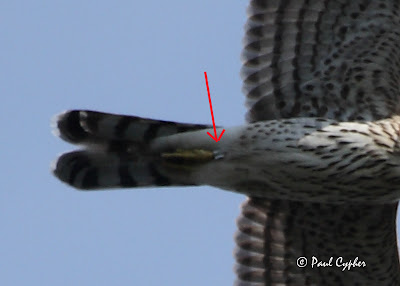 This bird is banded!  That aluminum ring has a number on it that is cataloged in a massive database.  If it were possible to read those numbers, we could find out who banded the bird, when, where, and how much it weighed.  Some researchers may have taken feather or blood samples for their research, too.  How cool is that?
It was a nice day for Rough-legged Hawks, too.  Goodness. If we are seeing them, winter can't be too far behind..... 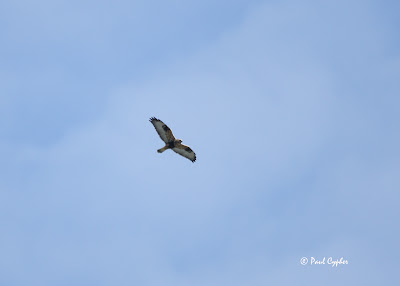 Sadly, it was one of those days for my buddy, Dave.   Let me explain.
He was there when I arrived at 11am. Within minutes, we drummed up our wishlist of birds for the day.  Given the weather and time of year, we wanted the late season trifecta: Golden Eagle, Rough-Legged Hawk and Northern Goshawk.  By 2:30pm or so, we had scored both  the Golden and Roughlegs.  By 2:40pm, Dave had to move along and head home.
In birding lore, the departure of a birder from the scene increases the chances for other birders to see the species so wanted by the departed.  In this case, Dave wanted a Goshawk but left, thereby increasing the chances of seeing it for those that stay.
As far as I can tell, a birder leaving the scene causes a disturbance in the space-time fabric, altering the reality around us. This disturbance causes us to veer off on a slightly different, but parallel, timeline.  The disturbance could be as simple a delay at a gas station, leaving for home, or even just a walk to the bathroom.  For the non-physicists out there, it might be like pulling on a thread that is hanging from a sweater.  With just a little effort, tugging on the thread can unravel the garment.
Dave, to his credit, knew the thread of space-time was attached to the bumper of his car.  More importantly, as a man and husband, he is keenly aware of the physics involving the "Angry Wife Continuity".  Failure to comply with previously arranged timeline specs (ie: "Dave, you have to be home by 4pm") would result in a complete and total failure of, well, life in general. He would be sucked into the Black Hole of Scorn.
He was reminded that he would be the "sacrificial birder" and was thanked by all.  As he drove off, he pulled the string just a bit too much.   At 2:47pm, not 10 minutes after his departure, the Gos zipped by the watch.  Had he NOT left, the bird would have changed course and slipped by unseen.
Sadly, the Northern Goshawk photos didn't turn out well.  Backlighting is simply not good at a hawkwatch.  So be it.  But, many of us saw it, thanks to Dave's teamwork and keen understanding of physics.   For what it's worth, here's the photo: 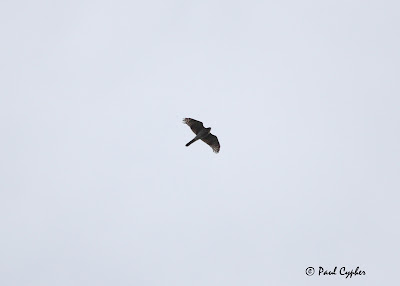 On behalf of all those present, thanks Dave! It was a great science lesson!
Posted by Paul at 1:51 PM

So thats the string theory! Stephen hawking would be proud!

Stephen *is* proud. He and I sat done a few years back and hammered this thing out over a few pints.. If I ever publish, he'll be a co-author.....