Jamie Oliver is a damned good cook.   His iPhone app has some real keepers.
Last night, I gave a new recipe a go - Pappardelle with mixed mushrooms and mozzarella.  Okay, pappardelle is a just a fat fettucine noodle so I did the easy swap.  A no brainer, right?
But that the hell is a pat of butter?
Well, Mr. Oliver is British and can't do things the way we do them here.  In the same sense that the Brits drive on the wrong side of the road (notice how I said that) and talk funny they apparently measure things funny in the kitchen.  Tablespoons and teaspoons aren't always used.  So, when I needed to melt some butter in the olive oil to saute the mushrooms, I needed to add a "pat of butter".
It turns out that a pat is about 1 or 2 teaspoons.  So what if I added two tablespoons. It was pretty damned good!
It turns out that Sunday was not the only place I would see gobs of butter.
Days off in October sometimes mean a walk around the trails at Lake Erie Metropark and then heading over to the hawkwatch.  Sure, today was a record day with over 20,000 Turkey Vultures (and some other goodies) along with good company, but my highlight was my personal time on the trail.
As one might expect around here the first week of October, warbler migration is dwindling while sparrows are picking up steam.  This morning, the best I could muster from a warbler standpoint,  was the Yellow-rumped Warbler.  Code named "butterbutt", they have a little yellow patch on their tush.
But don't let the species total suggest my fun. No way. Dozens at a time were greeting me during my one mile walk.  At one point, I had one literally at my feet. They were truly everywhere.  If I didn't see them, I heard their diagnostic tsup call note.  I'm sure hundreds were on the trail.
After dozens of botched shots, I was along the final leg of the trail when one bird in particular decided it needed to check me out a bit closer. 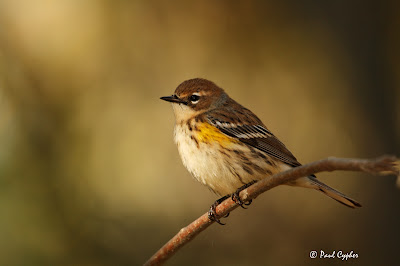 I LOVE THIS PHOTO!! Thanks for sharing it.

I'm glad you like it! I certainly like it, too. It just might end up on my wall here at home. I didn't mention it at first, but that photo is not cropped. The little fella was literally only a few feet away....