Autumn and Halloween are awesome.  Free candy.  Parties everywhere.  Fun.  What more could you want?
Oh, yeah.
Pumpkin beer is in season, too.
So many times, the clove, cinnamon, and nutmeg combo will kill you. Pumpkin beers can be pretty dangerous. In fact, as I understand it, some brewers don't even add pumpkins! 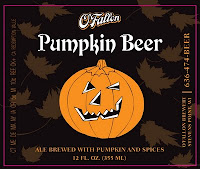 #826, the O'Fallon Pumpkin Beer, from the O'Fallon Brewery in Missouri, is what pumpkin beers can and, for the most part, should be.  A medium amber beer with a slight cloudy nature, the well balanced smell of the autumn spices is very welcoming.  On the tongue, add pumpkin to the mix (yes, they add the real thing!) and you have all the aspects of the year's greatest season dancing on your palate.  The finish, is a bit off, I'm afraid, as the beer is not quite sweet enough to stave off the hops and residual cloves.   A hint of those bready tones comes through as well.  All in all, get your hands on this while you can.  Good stuff.  4 out of 5.
That said, while the season is still young, pumpkins in cans can be had year-round, right?  Get two cups of the mushed stuff, add 2/3 cup of brown sugar, with dashes of lemon juice, zest, allspice, ginger, cinnamon, and cloves. Mix it all up over medium heat for about 20 minutes. It is great stuff on toast and keeps the cold cereal doldrums to a minimum.  Keep it in the fridge.
Ahhhhh, pumpkins....
Posted by Paul at 8:50 PM