Cranes are cool. No, not these. Okay, those are cool but I'm talking about these.
Standing 4 feet tall (!), these gray stunners are sadly not found in Wayne County very often. Oh sure, they can be seen here and there,  but not like that can be a just few counties over.  If you live in Southeast Michigan and want to see thousands of cranes, the Haehnle Sanctuary in Jackson County is just the place to see 'em.
With Mom and Dad in tow and maps in hand,  I shot off to Jackson County.  It was our intention to cruise farm fields and look for them feeding.  Cruise we did.  Look we did. See them, we did not. Despite  the maps showing all the feeding fields, we saw....one. As Dad put it, we checked all the right fields, just not the ones with the birds.
The real highlight of the night was not the farm field, but the evening flight. During the fall months, instead of roosting among the corn stubble, the Sandhills take flight and head to the safety of the marsh at the Sanctuary.   Not one. Not even hundreds.  As singles, pairs, or dozens at a time, thousands are recorded by the end of the night.  To add to the spectacle, know that it is not done in silence.  The call of the Sandhill Crane can not really be described as far as I am concerned. Check it out here.
All that said, there was a "star of the show". Sort of.  37-07, as he is known to researchers, does not quite get it.  He's a Whooping Crane.  Others like him are hundreds of miles away.  As a part of a Federal Project to help this species recover from the brink of extinction, some were basically raised in captivity and released back into the wild.  Ole 37-07 never really got that "migrate with kin folk" idea. Sure, he is one of tallest birds in North America, but he is not tall in brains.  So, each year, he moves between Michigan and Tennessee. That is, as I understand it, NOT AT ALL what the researchers were hoping for.
As for us, so what.  Mom and Dad were diggin' it.  Lost or not, it is one of the rarest birds on the planet.  With barely over 500 in both the wild and captive populations, who cares if it is lost.  Me?  No, I can not count it on my Michigan list.  Too much Federal involvement with the project means birders can't count it.
As the sun was setting, the marsh was absolutely golden. The sun's angle, the brown marsh vegetation, and some of the distant trees combined for one hell of a sunset. If you look close, in the middle of the marsh, you can see the Whooping Crane. Sorry, it was 1.8 light years away. That was the best I could do! 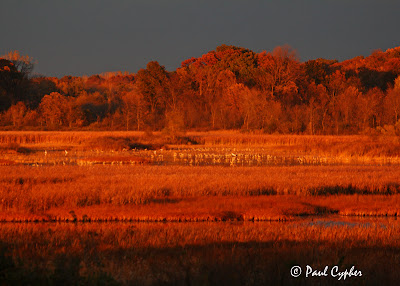 As all good evening's should, the night ended with a cold one.  A tiny pub in Chelsea was the perfect place for a   Boddington's Pub Ale, with that crafty little widget gizmo, and some wine for the folks.  That was all it took to wash done the spinach and artichoke heart dip.  Damn good fun.
In fact, the night was so fun, I did it all over again on Tuesday night with a good friend!  Damn good fun!  Again!
Posted by Paul at 8:30 PM