Long days are sometimes the best ones.
Yesterday, my co-worker Natalie ( a fellow bird addict) and I hopped the border into Canada for some birding at Point Pelee National Park.

Never heard of it? I could go on all day about the place, but here it is in a nutshell. Birds moving north out of Ohio (across Lake Erie) get pooped and land at the Point. Birders and ornithologists have been coming here for decades. That is a big nutshell version but you get it, I think.

I was a bit shocked when I got home and looked at my notes. I had last been there in May of 2004! That would explain a lot! The Point itself simply does not look like it used to. The observation deck? Gone. A long winding spit sticking out into the lake? Its a short little dune now. Entire trails that used to be wide enough for a few people to move shoulder-to-shoulder? Single-file jobbers now. Garlic Mustard is everywhere. Ick.

All told, we walked miles and worked for every bird. Only 65 species were tallied, including the Orchard Oriole (left). I would have expected at least ten more or so, but the little "list fillers" were not to be had. Seven warbler species at one of eastern North America's birding hotspots? In May? You have to be kidding! I'm not kidding when I say that Common Grackles and Robins probably outnumbered all other birds combined. No joke. A tough day.

That said, there are always a few highlights. The Surf Scoter on a Tip fly-by was cool and certainly not expected. The Scoter and Oriole were both newbies for Natalie. She also picked out the Red-headed Woodpecker by call. Her addiction is coming along nicely...

A special hat tip and beer goes to her for finding what may be the best bird of the day: 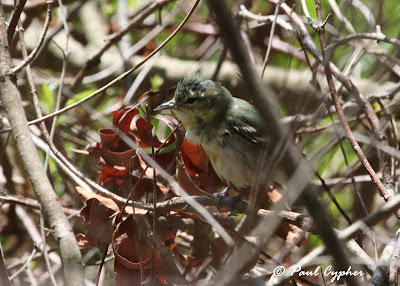 As I blundered forward down the trail, I suddenly realized she was not there. Turning and looking back, there she was, kneeling and peering into the underbrush. Not 10 feet in, bathing in a puddle, was the bird in the picture above. This is where I could so lie to all of you (I'm sure some people would!) and tell you that we knew immediately what it was . No. We were not sure at first. Like good addicts, I mean birders, we called out the field marks. "Prominent eye stripe." "Warbler bill." "Pale belly." "Two solid wing bars." When we saw that funked-out blue-green sheen on the back and crown, we were pretty sure we had it - Cerulean Warbler. A female. A quick flip in a field guide basically nailed it.

Sad to say, this bird is getting harder to find. It is one of the species of highest concern in the eastern United States because of a small total population size and significant declines throughout its range. Sadly, it is under consideration for listing under the Endangered Species Act. What a drag. Having a female bathing feet away and recording it with an extremely bad photo? Awesome. Really.

Dinner was at a simple burger dive/sports bar in Windsor. Why there? Charley's Brew Pub and Grill was worth it... I guess. Brewpub. How many beers does one have to brew in order to be considered a brewpub? Yup, one, apparently. Needless to say, the "Time Out Lager" (#745) was stunningly average but it certainly hit the spot.