This past Saturday was the kind of day birders really like to think about. Good birds and good company. What more could you want? By the end of the day (90+ species), I figured that we had accounted for all the compass points...

Read on....
At some stupid hour of the morning, I picked up my good friend Don. Three hours later, we found ourselves in the company of a few others in a small marsh just outside of Tawas, Michigan. What in the world would compel us to do such a thing? 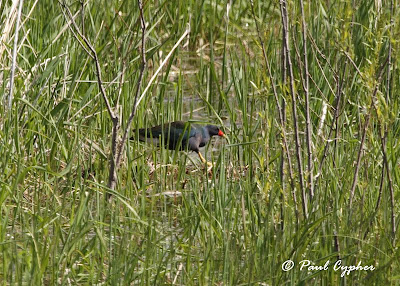 If you think this bird is a Common Moorhen or American Coot, think again. First, the bill is not white. It looks like a giant candy corn so that rules out Coot. No flank stripe, either. Hmmm. Notice, too, the "shield" on the forehead is bluish. With that stunning mix of blues, greens and purples, only thing fits - Purple Gallinule.

Normally found the deep south (Florida, for example), this bird is one of handful that are known to have spread their way into the Midwest in the last few weeks. The last I checked, Ohio had at least 4 birds. Many Michigan birders were hoping one would show up in Michigan but I don't think many people would have predicted Tuttle Marsh!

So, with that bird out of the way (my 341st bird species in Michigan), our first of the four compass points, "south", was secure.

After a quick lunch in town, the second destination of the day was Tawas Point State Park. While others have been going there for years, this was our first trip to this now very popular birding spot. Within minutes of our arrival, we secured our western bird of the day: 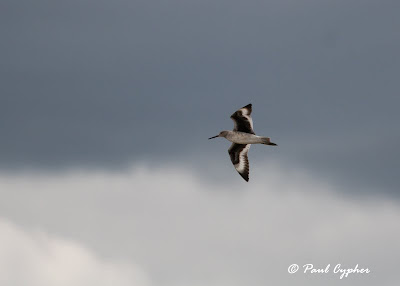 Sure, the picture (actually taken later in the day) is not crisp and totally lacks any composition and character, but this Willet did not seem to think my need for a nice photo was important. I just happened to have my camera at the ready when it came winging by. I'm surprised I captured what I did!

Apparently, this bird has two different forms. While the differences are said to be subtle, they exist. Some people see the day when the species will be split into two different species - an "eastern" and a "western". To date, it appears the Willets that drift into Michigan are indeed the western form. Chock up another compass point! 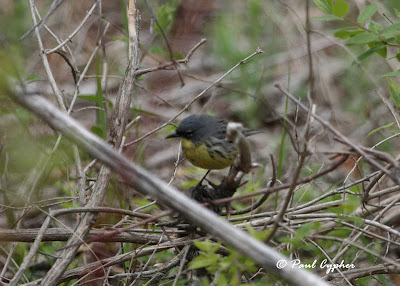 Yes, indeed, a Kirtland's Warbler! One of the rarest birds in North America, it nests in Michigan (for the most part) and winters in the Bahamas. It is also a bird with one of the silliest breeding plans known. Oh hell no, they can't just show up the breeding grounds and have a party. They have to find jack pines on properties 80+ acres in size that burned about six years previous to their arrival. The trees can't be too big or too small. If they are, they move on and find a new place...if it is available....

Oh, but we have to make it more serious. They are apparently a bit impaired and don't recognize the egg of the Brown-headed Cowbird. The cowbird lays the egg in the warbler's nest and they raise it as their own because they don't recognize the invader. Ultimately, they spend all their time raising young that are not their own. Bad news in the long run...

So, if you combine weird breeding biology with cowbirds, you have a bird that is lucky to not be extinct!

So, what was the northern bird? Know this one? 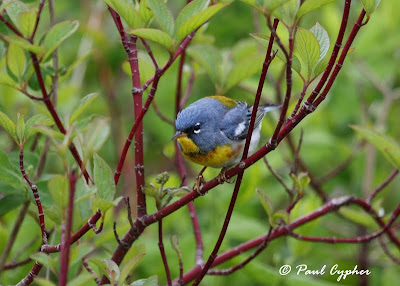 The Northern Parula, true to the name, has a part of its breeding range in the northern Canada. Unlike their cousin, the Kirtland's Warbler, Parula numbers are not close to extinction at all. Any way you look at it, rare or not, it is a slick looking warbler!

So there you have it - the compass points! Who needs "south", "west", "east" and "north" when you can use Purple Gallinule, Willet, Kirtland's Warbler, and Northern Parula.