Today Is The Day

Today is the day. No, not Groundhog Day. That was yesterday. Apparently, the little rodent was to send a text message, but the account got hacked. Whatever.
No, today is February 3rd and is known to some as "the day the music died". In the pre-dawn hours of this day in 1959, a small plane carrying Buddy Holly, Richie Valens and JP Richardson ("The Big Bopper") crashed shortly after take-off from a small airfield in Iowa. The pilot, Roger Peterson, died as well.
As a complete and total hack behind both the drums and guitar, I can appreciate the talent these guys had and the loss to music overall. This is especially true with Holly's death. Even to this day, he mentioned and honored by the likes of The Rolling Stones, Led Zepplin, Bruce Springsteen, and Bob Dylan. Wow, I could go on and on....

So where would music be today if these pioneers had not died so early in their careers? I'll guess we'll never know, but I would like to think there would be no hip-hop.... 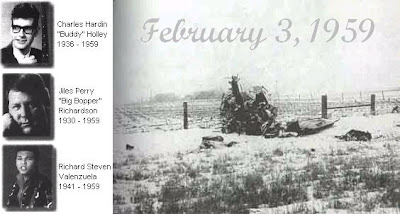