If you are hopelessly bored in life and read my last post, you may have noticed that I mentioned the weather has not been that cooperative for me as of late. Yesterday? Gray and clouds. Today? Go figure - gray and clouds. What do the two days have in common? Yeah, you guessed it - they were both days off. There seems to be a pattern here...

So, despite the rotten weather, I made a go of some shooting. Yesterday, while at Dingell Park in Ecorse, I had a great chance to take some pics of some cool waterfowl including American Wigeon, Ring-necked Duck and Common Goldeneye until that Bald Eagle came and scared them all away! Anyhow, I managed a pic (at left) of some Redheads in flight as they all returned. Once again, the lack of light shafted me. If there had been some sun, who knows what I could managed. I suspect something at least average. On a positive note, I did manage a glimpse of a Northern Goshawk as it sliced it's way over the treetops next to the park. Very cool.

Today, I opted to make a swing through Elizabeth Park in Trenton. By my count, I would say there are 1.39 million Fox Squirrels running around. All one needs to do is stop the car and they scurry out by the thousands (I mean it - thousands!). I must have been just behind the free-munchies truck as the little rodents, some with mange, were running around with entire slices of bread in their mouths. Comical, but sad. Needless to say, I was happy to find one who would not approach my car when I stopped and seemed to understand what native foods are all about. That Goshawk up the road at Dingell Park needs to quit wasting her time there and move here for the season. 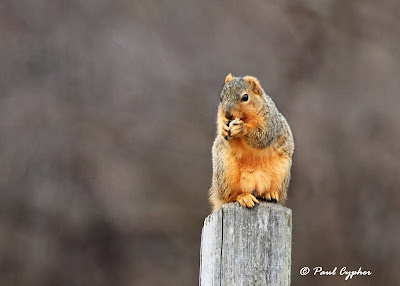 By the way, my next day off is Saturday. It is now guaranteed to be cloudy. Plan accordingly.
Posted by Paul at 7:37 PM