I had a great Christmas, just in case you were curious. One thing I am very happy to mention is that my family and I have totally ditched the stupidity of gift wrapping and gone to gift bags. Even then, one bag for each gift is a bit much, right? So, in some cases, we cram what we can in one bag and cover it with tissue paper. Works for me!
So with one bag in particular, I noticed it was jammed and heavy. It has to be some books, right? I reached in and grabbed the first book my fingers touched. The caption on book's front cover reads as follows:
One by one, feathery flakes landed on cold blankets and buffalo robes, on sweat-slicked hair, on shoulders turned to the sky, on soft cheeks - each flake delicate and slight, but each lending its almost imperceptible weight to the horror of what was about to happen....
Hmmmm. Snowflakes leading to a horror. Sound like Stephen King? Dean Koontz, maybe? No. Daniel James Brown. Oh, by they way, it was not fiction. "The Indifferent Stars Above" is about the Donner Party. 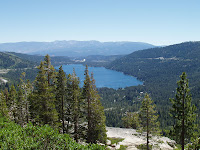 I'm sure you have heard of them. During the latter part of 1846, emigrants, ultimately led by a George Donner, got stranded in the Sierra Nevada Mountains of California. Low on supplies, the "feathery flakes" piled around them to depths most of us can't conceive (22 feet, in case you are curious). At their camp at what is now Donner Lake (left) some of the party resorted to cannibalism to survive. A small group, later to become known as the Forlorn Hope, managed to trek their way out, while, sadly, dining on the flesh of their companions. Ultimately, rescuers retrieved those that had survived long enough to be rescued.

Now, before you curl your nose at the thought of reading such a story, think about a few things. First, the story happened. Tah-dah! Done. There is nothing that you or I are going to do about that. Second, episodes like this have happened since then. Stranded and starving, people are apparently prepared to do incredible things, including cannibalism, to survive. Horrible as it may sound, I suspect it will happen again some day. Third, like it or not, there are some cultures today that do it as common practice for cultural reasons; food is not the issue as they live in some of the most lush places on the globe.

So what was the big deal with this book? For starters, it is not a story about cannibals. It is a story about survivors, centered around Sarah Graves. The author put me in that wagon train. I got cold (despite the fact I was drinking a hot buttered rum and had my thermostat set to 69 degrees). I got angry (I wanted to strangle Hastings while Foster and Keseberg where just plain bad people) . I was happy. I was shocked. At no point did Brown dwell on the cannibalism. He did, however, address it in such a way that you, the reader, realized it was going on.

At the drop of hat, Brown left the Sierra Nevadas and brought you to the current day. Hmmm, how does a body react to hypothermia? Believe it or not members of the Forlorn Hope got hyperthermia! How did that happen? He'll bring you up to speed. That, people, is masterful writing. 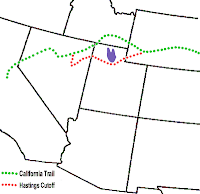 Who was Hastings, you might ask? The Donner Party, on the "final leg" (sorry) of their trip, followed what was called the Hastings Cut-off. Named after Lansford Hastings and detailed in his book, the "Emigrant's Guide", it proved to be a reckless trail that added weeks and miles to the trip. Days were spent cutting trees and moving boulders in Utah. Days more were spent crossing deserts with little access to fresh water. Amazingly, the first time Hasting's himself took his own trail was when he went east from California, in 1846, to guide the westbound migrants. He had written and published the route without taking it first. What an ass. (For the record, the Donner Party was advised NOT to follow the short-cut by a fellow who was just coming off the trail. Exhausted from a summer literally crossing the country and feeling rushed (they did not want to be on the trail in the winter), they felt an ill-advised route that was "shorter" was better than the known trail that was "longer".)

Foster and Keseberg? Well, they are not like the others. Members of the Donner Party survived by eating human flesh. When someone died, they were processed. These two? So far as we know, they are the only two who murdered and then ate...

If you are in the mood for a great read about a truly amazing story, check out the The Indifferent Stars Above. The site of the camp, by the way, is now administered by the California State Parks. I guess this means I will have to get there someday...

So, what were the other things in that Christmas gift bag? Seriously, would you believe a pepper mill and two cookbooks?! Hmmmm... a book about hardy souls who survived by eating human flesh sharing a gift bag with items that make food taste better.

Email ThisBlogThis!Share to TwitterShare to FacebookShare to Pinterest
Labels: Books