Technology can be a wonderful thing. It has put people on the moon, cured diseases and even convicted O.J. Simpson! Yay! You really have to love it.
Except when it breaks....
Today, I spent just a few hours at the hawkwatch. A few Golden Eagles and some other goodies, too. Apparently, it was even better before I got there. Anyhow, I was taking a few pics of things here and things there when I managed to snatch a couple of shots of a Great Egret.

You might think they are easy to photograph seeing that they are large and white. Large is cool because they are easier to track in flight. Plus they basically lumber along so you can manage a fair number of shots with the hope that a few might be worthwhile.

The white, on the other hand, makes it a bit tough. It is very easy for the camera to overdo it. Any and all detail in the white areas is "burned out" and the pics looks like junk. It is a big white blob. When you look at the pics on your camera's display, the burned out portions blink. The dreaded blinkies basically tell you "Dolt! You blew it!".

So, this Egret comes sauntering by at a fairly close range, right? The lighting is good. Shutter speed is good. Aperture is, uh, apertured. Exposure compensation is compensating(I had is adjusted right for the bird against the sky). I took maybe 15 pics as the white beauty moved along. A preliminary look at things on the camera suggest it might be a nice shot sequence! Cool! 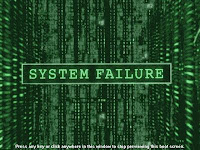 Cool... until just now. I loaded up the compact flash card in to the computer and it can't read it. Hmmmmmmmmm. I removed and re-inserted the card. Nothing. Lots of swearing didn't do a damned thing either, so I finally re-started the computer. Still nothing. I put the card back in my camera. Toast. Totally gone. All files gone. CF card is trashed. The camera even told me to replace the card! It currently sits on the bottom of my garbage can. Damn. Those Egret photos that might have been nice? Gone forever.

But, I am still not sure you understand what has happened here. It was not just the Egret photos that I lost. Last night, I was along the Lake Erie shoreline and photographed Bessie. This morning at breakfast, that was Elvis at Kate's Kitchen eating grits and I think that was a UFO taking Glenn Beck back to the Planet Idiot (and FOX wants you to think it was his appendix!). I have the pics...er, had the pics to prove it. I guess you just have to take my word for it.

Aaah, oh well. A few lost bird pics and some stuff that would unravel society as we know it. So what. I would be really miffed if they were vacation photos!
Posted by Paul at 9:25 PM