For those of you in the dark (buh-dum-dum), these past few weeks, the Great American Eclipse of 2017 has been incredibly hyped.  Lets face it - it should be.

This type of eclipse involves the moon moving directly between the earth and the sun.  Recognizing that the sun is basically 400 times larger than the moon but is also 400 times farther away, the sizes match almost perfectly.  If the two line up correctly with each other and the earth, an eclipse ensues.

The result is an awe inspiring astronomical event that is known to have stopped conflict and  inspire the arts.  Christopher Columbus even used one to bamboozle indigenous people.  I suspect an eclipse might  even confuse a Republican or two.

During this recent eclipse, the 70-mile wide strip of land, known as the Zone of Totality, stretched from sea to shining sea.  As expected, the lighting became dim, the temperature dropped and some animals reacted as if it was dawn or dusk.

While zillions of people flocked to the Zone (Wyoming's population literally doubled!), I could not make the journey.  While I had an offer for a road trip to St. Louis, I was obliged to decline as I had home responsibilities (sorry Josh).  I knew I wanted to photograph the spectacle but I just couldn't manage the time commitment.

That said, I wanted to secure photos that you would likely not see elsewhere.  Lets face it - stunning images were produced showing the Bailey's Beads....but nothing else is in the picture.  Why?  In part, because it was too high in the sky. While there is certainly nothing wrong with that, they are photos that could have been taken anywhere in the zone.  I wanted to incorporate the eclipse into some sort of feature that says "I was here!"  with "here" in this case being a readily identifiable landmark.

But my problem was the angle. At 2:28pm Detroit time, the sun was over 60 degrees above the horizon.  Further, in order to have a large sun in the image, I have to use my telephoto lens.  So where can I go where I can shoot high in the sky for a large sun and still have a recognizable foreground?

Rising over 660 feet, the Penobscot Building is one of Detroit's gems.  Completed in 1928 in the Art-Deco style, the roof profile is probably one of the most identifiable buildings in Detroit's skyline.  For those of you familiar with the area, this is the building with the red ball on the spire at night.

So, the idea was simple - find the location in Detroit where the sun will be near the Penobscot ball during the eclipse when viewed from the ground.

Enter PhotoPills. Without the gory details, this application allowed me to calculate where I needed to be during the big show. The destination? Campus Martius Park.

During the big day, Natalie, Sue and I set up shop with two critical pieces of equipment.  First, we all had the eclipse glasses.  No, they don't make anybody look good but they make you look smart.  Everybody knows that looking into the sun, even under most stages of an eclipse, is bad.  Okay, maybe not everybody.

Second, I secured the mandatory solar filter for my camera rig.  Without it, the camera is ruined (not unlike your retina) as the lens focuses the sunlight on the delicate sensor.

Ultimately, I was in three different locations.  That's a long story.  But, in the end, I got the shot I envisioned. For the record, these images are barely altered. 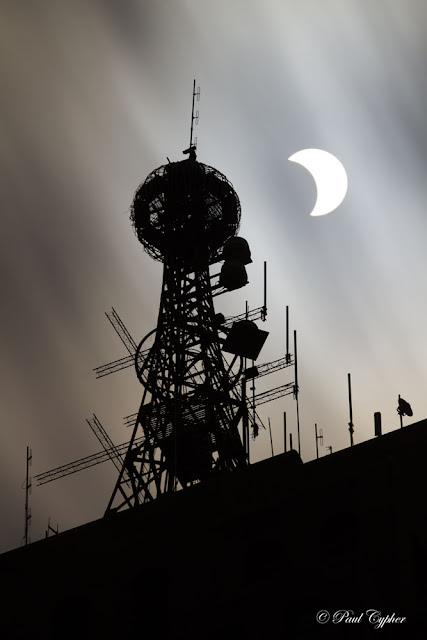 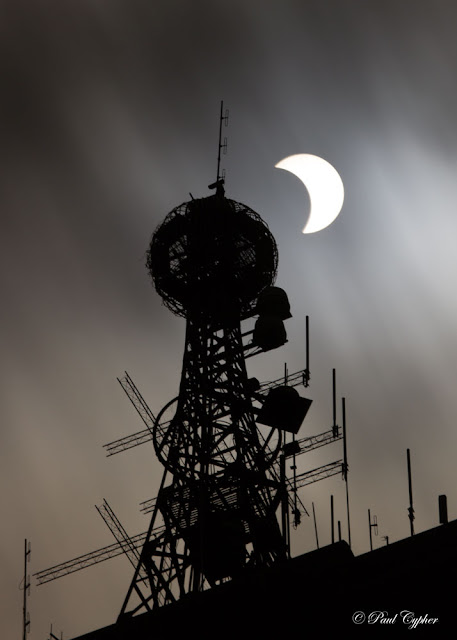 But for me, it worked.  The clouds were just starting to roll in during the latter phases.  Knowing the solar filter was blocking light, I needed to lengthen the shutter speed.  Subjects on the move with an open shutter blur.  Voila.

All in all, the outing was excellent.  In the event you missed this particular event, another one is occurring in 2024. Totality will be as close as Toledo, Ohio.  I'm there.

I'll be looking ahead to June of 2021, also.  Little known fact - the sun will rise in Detroit eclipsed on the 10th.

Great shots Paul. I was unaware of the 2021 sunrise eclipse.