OK in the OTR and CZ

While I have come to generally despise the name "bucket list", I understand its motive.  Natalie and I, looking to hit a target destination, hit the road.

The drive down to Cincinnati was smooth as it was a Sunday morning.  By lunch time, we had arrived in the Over-The-Rhine neighborhood (OTR).

Needless to say, that name needs some explanation.

As is so often the case, immigrants moving to a new town gather in clusters based on their heritage or country of origin. Detroit has Mexican Town while Dearborn has a tremendous Middle-eastern population.  For Cincinnati, the mid-19th Century saw a a huge influx of Germans.

Rhine. Germany.  So the connection is made, right?....sort of. Germans named the neighborhood based on the geography of their homeland. They were indeed "over the Rhine."   A quick peak at a map of Europe shows the Rhine River is the second longest river in the region and is a major part of Germany's identity.

But there is no river in downtown Cincinnati.  That's right - no river exists separating the downtown region with the OTR.  Perhaps those Germans were having one too many lagers?

It turns out there was a water feature that inspired the name. During Cincinnati's expansion as a midwestern economic force, the Miami and Erie Canal  was cut from Lake Erie to the Ohio River.  This canal, running south along the western counties of the state, literally bisected Cincinnati into a northern and southern portion. Guess where OTR ended up?  Yup - north of the canal.  So from a downtown perspective, OTR was literally over the "river.".

As economic forces changed, the canal lost its muscle. After a short stint as basically an open sewer, the city opted to pursue a subway system. Dead before the first car was on the track, Cincinnati opted to pave the land as a road.  Today, you drive it as Central Parkway.

Anti-German sentiments came into play during World War I.  This was complicated by the gaff known as Prohibition. After all, what do Germans like to do with their time? Brew beer!  Over a dozen breweries where in the neighborhood at the turn of the 20th Century. Why would a cultural group stay in a region where everyone hates you and numbnuts in your government prevent you from making a living?  You'd leave too!

Construction of major interstates during the Eisenhower Administration forced the displaced poor in to the OTR that was now partially occupied by the impoverished from Appalachia.  Federal programs soured as crime rose and poverty became entrenched.  By the 1990's, OTR was a neighborhood that you didn't walk in broad daylight. If you didn't need to go there, you didn't go.   (Some studies suggested that crime rivaled that of Compton in Southern California.  While this has been discredited, OTR was still awful. Nobody in the right mind disputes it.)

Yes, we went there.  Now, before you think we're nuts, read this article.  Visit this website.  In short, this is what can happen when concerned citizens and businesses say "enough." 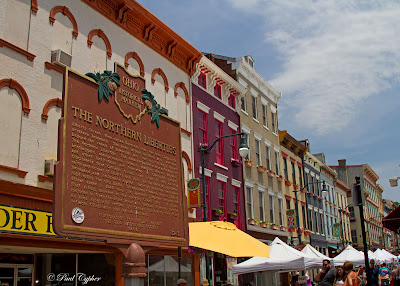 The opportunity to poke around for the afternoon was tremendous. The weather was great (though a tad warm).  It wasn't anything a cold beer and wood-stove pizza couldn't fix. The Findlay Market was extraordinary.  Built in 1852, the main building is a rare example of the nation’s early iron architecture.  Iron frameworks for construction were a BIG deal when they were first developed - very few remain. 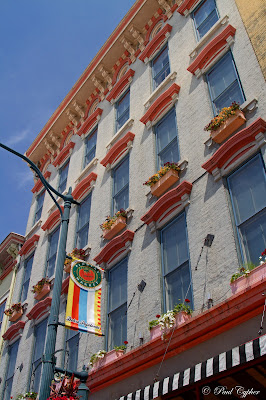 Still in the OTR, the obligatory cold beers on a warm early summer day came at the Rhinegeist Brewery.  Remember, the OTR neighborhood was largely German when it was settled.  German for "Ghost of the Rhine", the little skulls on the tap are a perfect logo.  Further yet, and perhaps more cool, the current brewery is inside one of the old bottling operations from the Pre-Prohibition Era.   The photo below was taken on the rooftop drinking deck.  Five stories above Cincinnati, the opportunity to taste fancy beer, look at old architecture and and watch sky-diving Peregrines Falcons cant be overlooked. What a great way to enjoy some time... 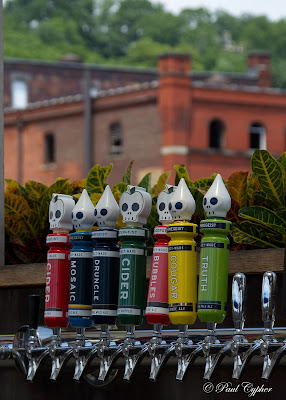 The inside, it should be mentioned, is simply huge. I mean huge.  Simply massive. Natalie and I were both in awe as we walked up the stairs to the main room.  Thousands and thousands of square feet.   They literally have wiffle ball games inside the building.

Sadly for us, we did not get a chance to take a tour of the caverns below the building.  For you beer brewing novices, lagers, a German flagship beer, are not fermented at room temperature. They must be kept cooler.  With today's modern technologies, refrigeration is possible.  Historically, brewers would construct large caverns below the breweries were the temperature were suitable.  The caverns still exist below OTR. Perhaps if Natalie and I return, we can get there. In the meantime, the kegs below were in the main ale room. 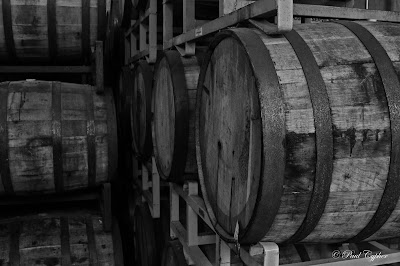 Dinner was at yet another stellar OTR project - The Taft Ale House. Originally, it was the St. Paul’s Evangelical Church and was once the oldest protestant parish in the Queen City (one of Cincinnati's many nicknames). Constructed in 1850 amidst the expanding Over-the-Rhine brewing industry, its rather ironic that the church becomes the brewery, don't you think?

What's the Taft connection? William H. Taft was from Ohio, specifically Cincinnati.  Ohio is rather proud of their man who went on to be both the President of the United States and the Justice of United States Supreme Court.

The legend of the rather rotund, 350-pound Taft getting stuck in the tub lives on here. While it has never been confirmed as the story appeared 20 years after he left office, it is known he added a giant tub to White House during his tenure as President. To honor the story - true or not - the Ale House developed what is quite possibly the coolest logo ever.... 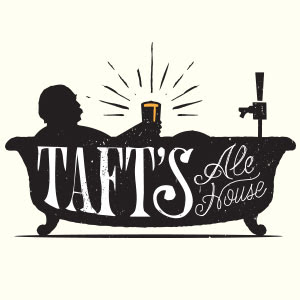 After dinner drinks were secured in Washington Park. Originally, it was developed in the mid-18th century as a part of the Over-the-Rhine neighborhood after a short tenure as a cemetery. During OTR's less than glamorous days, the property was the dump you would expect it to be.

Parking? Well, think about this. How many cars were there during the development of the OTR? Exactly none.  Needless to say, parking in the area might be a challenge and what you do find might be tight. Well, during the $46,000,000 restoration,  a 450-car garage was built below the park. You would never know it was there as it was mastefrully included.

Further, the entire neighborhood is now boasting rurals.  The Golden Muse (below) is right next to the park.  It's nice to see art that has not been vandalized.  The city, forward thinking as it is, totally embraces the idea. 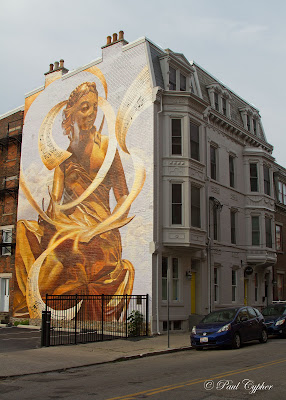 Lodging was a short skip from Washington Park.  The Symphony Hotel is quite possibly the nicest place we've ever stayed.  Resurrecting an old 18th Century home with the musical theme based on the Cincinnati Music Hall (which is literally across the street), the building is now one of the go-to places for lodging. Fine dining awaits guests before a show at the Hall.  For us, our meal was Monday's breakfast cooked to order.

Each room, by the way, is named for musical greats.  We opted to pass on the Mozart, Brahms, and Beethoven Rooms. There was no Cypher room interestingly enough.   Instead, the Rachmaninoff seemed appropriate.  Named for Sergei Rachmaninoff, the room was stunningly detailed in late 18th Century furniture.  What a room.

As a biology nut, I always find the historic medical investigations of the deceased to be fascinating.  While it has yet to confirmed (if indeed it ever can be), evidence suggests that Rachmaninoff suffered from either Marfan Syndrome or Acromegaly.  Both congenital conditions result in large hands (among other traits).  He was noted as writing piano pieces with chord structures that involved tremendous stretching of the fingers.  His skills as a pianist were certainly added by his biology.

While our first day in town was largely an "off-the-cuff" sort of structure, Day 2 was certainly planned. In fact, it was really the entire reason for the trip.

The Cincinnati Zoo and Botanical Gardens is one of the premier zoos in the country.  One of the nation's oldest, it made recent headlines for the killing of Harambe the Gorilla. While certainly a horrible situation (and correctly handled by the zoo, by the way), another death occurred there that should not be overlooked.

John James Audubon, the noted 19th Century ornithologist, estimated that the Passenger Pigeon population was in excess of 3 billion birds.   Unregulated hunting and massive habitat loss brought the once abundant bird to extinction.  Martha, the world's last passenger pigeon, died in her enclosure at the Cincinnati Zoo on September 1st, 1914.

Her enclosure remains.  The statue below is there in her honor, as well.  Her time of death is noted as 1pm - this makes that moment in time one of the only episodes (if not the only  episode) in world history where the extinction of an animal is precisely known. 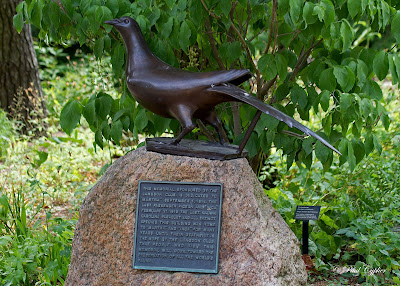 Interestingly, and even more unknown to most folks, the world's last Carolina Parakeet died here, as well.  Incas died on February 21, 1918.

While it was not horribly hot, it was hot enough if you are not used to humidity.  Regardless, it goes without saying that cameras and zoos go hand in hand.

Giraffes, in case you don't know, poop different depending on whether they are males, females, or moms who have just given birth. 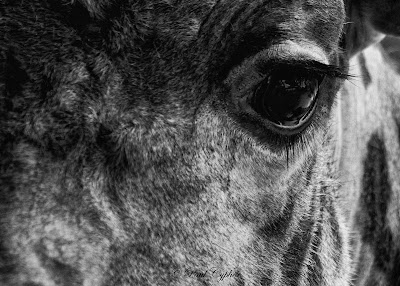 Orangutans, as you might imagine, spend alot time in zoos doing nothing.  Contrary to the opinions of the public, their time in the wild is spent doing much of the same... 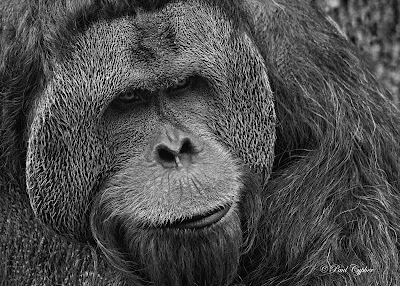 Gray-crowned Cranes are native to Africa.  Like so many other species of wildlife, they are experiencing declining populations.  Sucks for Uganda.  It's their national bird and is shown on their flag. 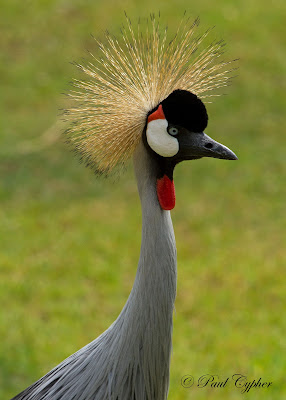 Meerkats have become very popular given their successful show Meerkat Manor.  Their tendency to post a guard while the rest forage is an excellent trait that shows their "all-for-one one-for-all" mentality.  It works great.......right up until they each other's offspring to help ensure better odds for their own kids. I wonder if they showed that on the television! 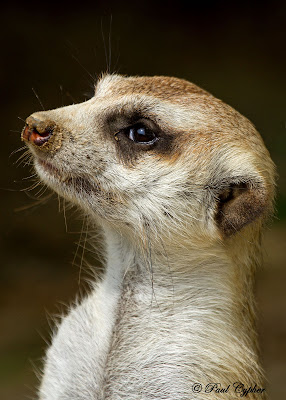 Ultimately, the two day tour of Cincinnati was superb.  Beer.  Buildings.  History.  World class zoo.  In fact, it was so enjoyable, we may have to head back.  There were plenty of parts we never covered.
Posted by Paul at 4:57 PM

I want to use this opportunity to appreciate Dr Ekpen for the good work that his doing around the world, many of you must have ahead of him and what his doing. The reason why I'm appreciating him on this site is because maybe someone out there is facing the same challenge and he/she don't know what to do next to fix the issue, Dr Ekpen is a great spell caster and friendly also, if you have problem in your relationship you can contact him right way and he will be clad to help you out. Contact him now via email at ekpentemple@gmail.com or on whatsaap +2347050270218.