Apparently, historians are not sure what to make of King Arthur.  Did he exist?  Did he not? In short, people just aren't sure.

We do know his sword, Excaliber, is a huge part of the Arthur legends.  It was said that he who could pull it from the stone would rule England. Other versions have a Victoria's Secret model tossing him the sword from a lake.  Ok, maybe not a model, but she is always drawn to be one.

I recently had my own Excaliber experience the other day.

All thing considered, I have become more or less comfortable in the kitchen.  I am not stroking my ego, but I can manage.   Some of my more prized dishes over the years include Pan-seared Pilsner Sirloin Tips with Herbed Pecan Orzo and Shiitake-Blue Cheese Sauce, Feta and Lemon Pancakes with a fruit salad topping,  Goat Cheese-stuffed Turkey Burgers with Grilled Potato Skewers and a Curried Onion Dipping Sauce, Garlic-Hazelnut Chicken Breasts with Mustard Glaze,and Lager Steamed Thai Turkey and Shiitake Dumplings with a Pale Ale Sweet and Sour Dipping Sauce, and various pizzas with homemade dough.   Mind you, I don't make stuff up; I just follow the recipes.

So, for the Fourth of July holiday, I thought I would go out on a limb and try something I have never done.

Now, I told a few people this fact and they looked at me like I had 10 eyes.  To them, it was simply impossible that a grown man who can somewhat cook has never hard boiled an egg.

Sorry, its true.  (While dedicated readers may remember this blog entry stating the consumption of deviled eggs, I did not make them. My mom did.)

OK, great, but what did I do with them?

I made deviled eggs. 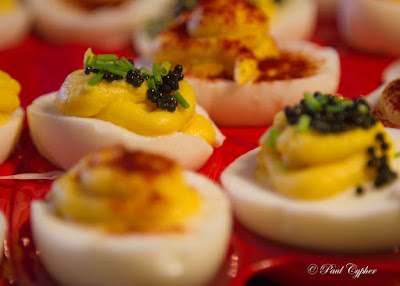 For the Holiday season a few months back, I secured "Inside the Test Kitchen" by Tyler Florence. He and I go way back.  The book has some pretty neat shortcuts for the kitchen and puts tried and true kitchen lore to the test (hence the name). Great recipes are found throughout.

Half of the eggs were topped with paprika and a dash of salt. Hardly anything original there, right?

Utilizing my connections in the black market, I was able to secure servings from the Iranian Beluga fish.  I just happened to find $34,500 in the washing machine the other day and I thought fish eggs would be a great use for the cash. To hell with student loans, right?

Natalie even liked them. Now remember, she has had an aversion to seafood and fishy stuff for quite some time. During our Maine trip, she experimented with clam chowder, lobster and scallops and liked them all. Now fish eggs?! Go figure. In fact, she suggested they were the best deviled eggs she ever had.

Fortunately, the entire dish was saved by a product of the modern world though it was clearly influenced by Arthurian Legend.

Per the instructions on the jar, caviar is not to be handled by a metal utensil.  The metal imparts an icky metallic taste in what is literally nothing more than salty, squishy balls that squeeze out of a fish's butt by the thousands. Before the days of plastic, Mother-of-Pearl utensils were used.  Glass and porcelain, too.

Without fancy stuff in our kitchen, I was struggling to find a way to dollop the caviar on each egg gently.  Pushed in the back of the utensil drawer, safely sealed in its original plastic wrapper, sat the spork.

It was a triumphant moment. When the sword spork was removed the stone drawer, the orchestral music booming throughout the house was simply incredible. It was like John Williams himself was in the other room.  Fortunately, no sparks flew as they surely would have caught the kitchen on fire.

Interestingly, some say that metallic ions wrecking food on your palate is nonsense and the Mother-of-Pearl or glass spoon is a nod to snooty tradition.  Further, serving fancy fish eggs with plastic is akin to asking house guests to bring their own toilet paper. You just don't do it. It looks bad.

In any case, I know this: I can't confirm or deny the existence of King Arthur, but I know Excaliber exists.

Who would have thought it was plastic spork in my drawer?

(It should be noted that the caviar was actually bought at Meijer for $7.  Given the economics and environmental issues of sturgeon caviar, lumpfish is used now as a friendly alternative.  Shhhhhhh. Don't tell anybody. I want everyone to think I'm rich.)

Just because some Watery Bint hands you a Scimitar.....Great stuff with the eggs! I cook an awful lot and no one believes me when I say the hardest thing to do is boil an egg.A million years ago I was in Russia (or USSR as it was then called) and I got a taste for Caviar.There is nothing quite like the saltiness you get from those eggs..We ate it on Crackers,but now I know that Meijers sells the Lumpfish variety I might give your egg recipe a go! Great Post!