Bird Bling on the Beach

The Piping Plover is a not very big bird.  Smaller than a Cardinal and with colors the same shade as the sands they nest on, it would be easy for your average person to overlook them.

Of course, any good birder knows you can find birds in their appropriate habitat.  In the case of the Piping Plover, just looking for the signs is a great place to start... 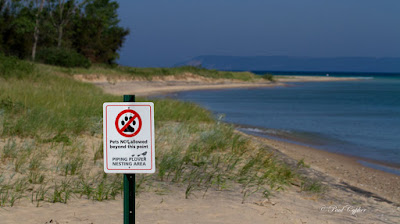 A few days back, Natalie and I split town. During our two-day road-trip, we had the opportunity to be official National Park Service volunteers.  Seriously. Official.   All we needed to do was to fill out official papers and "Voila", we're in!  We had it all.  Our own car, guns, badges and small helicopter were all at our disposal. We even had our own guide.

It helps when you wife's uncle is a Service employee.  Dan has been at Sleeping Bear Dunes National Lakeshore for a few years now.  While a large part of his job is coordinating the investigations of miles of beach to collect dead birds for botulism studies, he can break away and tackle other projects. With him as our official team leader (in large part because Natalie and I had no idea what the hell we were doing), off we went. 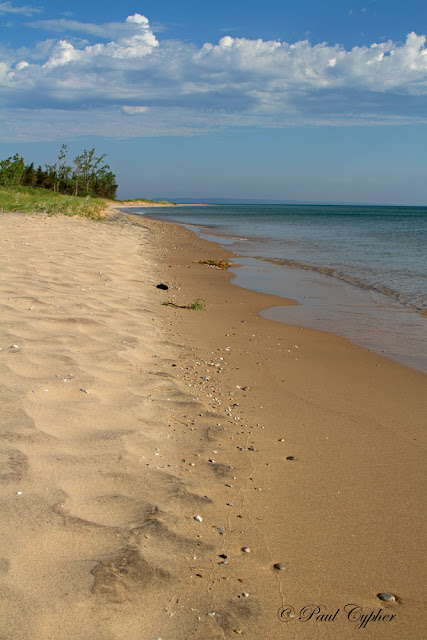 In the event you have just been released from a Turkish prison, the Piping Plover is a critically endangered bird. This listing is not just for Michigan, but at the Federal level, as well.   Rough figures put this little bird at only between 50 and 60 nesting pairs in the entire Great Lakes area and less than 7,000 individuals worldwide. To the best of my knowledge, that number exceeds the number of Americans who think Dan Quayle would have been a good President in 2016, but I digress.....

With a need to monitor not just nests, but the individuals in various territories, banding is key.  Take this bird for example... 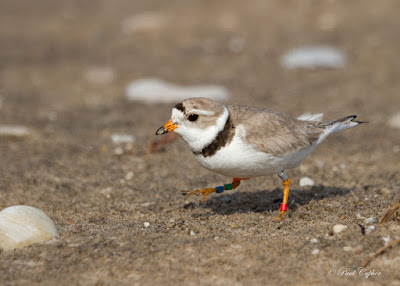 The official Fish and Wildlife Service band on the upper left leg does not help you identify the bird at a distance. In the hand, you have read the number, but so what, right?  All the birds look the same from 30 feet away. However, the combination of the reds and greens and their specific placement lets researchers identify individuals.  Green-over-red would not be the same bird as red-over-green.  Given the need to track these things, all birds are banded.  A non-banded bird on the Lake Michigan shoreline is a big deal.......

...which brings us to the highlight of our Plover foray.

An unbanded bird had been discovered.  Good old fashioned sleuthing on the part of the Park Service allowed researchers to find the nest in a most unexpected location.  Dan was able to show us this new spot with our official task being simply to determine whether or not the parents were still incubating. He swore us to secrecy as few people are aware of it.  But I don't care, I'll tell you.

It was under a cage.  No really.  In fact, they all nest under cages.  Well, lets back that up. The cage is added over the nest by staff after the nest has been located. It helps protect the incubating parents and youngsters from pesky predators like a Merlin.  As you might expect, the mesh on the cage is large enough for the plovers to come and go, but too small for most predators.

To further emphasize the secrecy of this location, Natalie and I had to visit the dentist.  A molar was removed only to be replaced with a fake tooth. Hidden in the tooth? A cyanide capsule.  We were instructed to flip open the fake dentistry with our tongue, extract the pill,  and bite down if we were taken hostage. The Park Service does not mess around.

Fortunately, the weather cooperated.  The breezes from the lake were quite possibly life-saving.  The region would have been an oven.  Dunes and beaches act like concrete when it comes to heat.  Boy, that would have been rough.

While the Plover hunt....er, bad word....expedition was certainly fun, that was not the only part of weekend.  The sunset at Empire Beach was nice, but we dipped on the Green Flash. 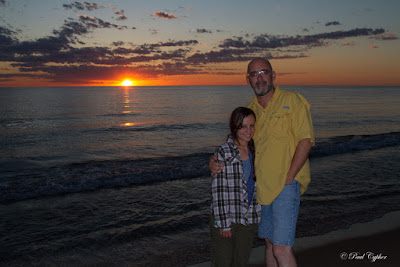 The hike to Pyramid Point was breathtaking. That is North Manitou Island in the upper right corner.  We are hundreds of feet above Lake Michigan. 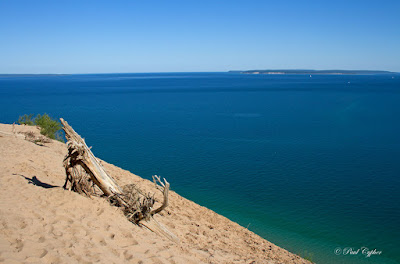 In the event you are wondering, the presence of the sign cautioning patrons about the steep dunes and the two hours needed to return the bluff's top doesn't stop everybody.  Per Dan, there are more emergency rescues at Sleeping Bear than there are in the Grand Canyon.  People just don't take the place as seriously as they should.

In any case, we knew enough to not run down the dunes (unlike the local WDIV reporter). It is just such a bad idea. Instead we opted to try our hand at canoeing the Crystal River.

I can tell you it was amazing. The speed.  The rocks.  The whitewater.  The bodies and smashed canoes everywhere were intimidating but we knew we could handle it. Only our skills saved us from certain death. 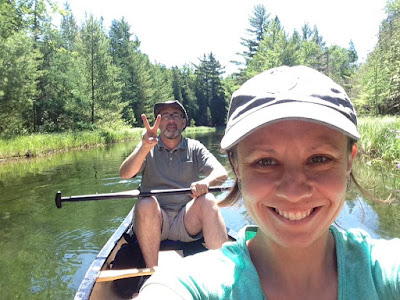 So, while we were gone for only two days, it really does seem like we stuffed a lot in there. It's amazing what a quick getaway can do for you.

All positives aside, I have to plant my dig. Boone Docks in Glen Arbor. Nat and I had lunch there.  While the patio was nice., three beers, buffalo wings, and mushroom caps should not cost  1.9 million dollars.  Not worth it.

We went back and showed our bill to the plovers.  Does he looked a little puzzled about those prices?

Yeah, we were, too. At least he has cool jewelry he could pawn to help pay the tab.
Posted by Paul at 8:29 PM