A short distance north from Traverse City, Michigan sits the small hamlet of Greilickville (GRY-lick-ville).  To the tourists who flock the region during the summer months, it does not seem like anything more than a small extension of downtown Traverse.  During its heyday in the late 19th Century, businesses included a huge sawmill, tannery, brewery and brickyard.

Now, I suspect you think this post is going to be more blither about beer.

Well, its not.  This mystery begins with the bricks...

During my Historic Preservation and Tourism class this past spring, Natalie, Ken and I made the trip to Traverse City.  Lunch, however, was in Cadillac.  The Clam Lake Brewing Company comes highly recommended.   Both beer and pizza were quite good. But it was not the chow that grabbed my attention. 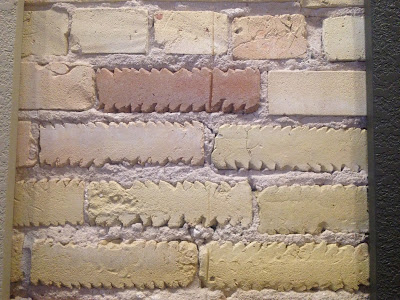 The photo above was taken inside the brewery.  A few things may catch your eye.  Notice the yellow bricks.  Yes, it is the same yellow from the State Hospital in Traverse City.   My last post highlighted some photos from the tunnel under the Hospital. In fact, bricks from all over the northwest corner of the Lower Peninsula were made in Greilickville.

Inconsistencies of the brick making process would probably explain the reddish brick in the center of the picture.  If you look closely, there are varying shades of yellow, too.

The real mystery in the photo would have to be the serrated edges on only some of the bricks.  As Ken and I walked the building, we noticed a scattering of them everywhere.

A few weeks ago, I was in Traverse again for another class. The class, Adaptive Use of Historic Structures, had us investigating old structures that had been given a new lease on life.

While enjoying lunch with classmates at Trattoria Stella, in the basement of the old hospital, what do I see in the wall? 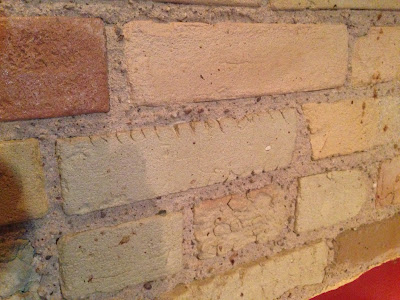 You might be thinking "Oh...the same bricks!" That makes perfect sense, right?

Note how the serrations are not as deep.  In fact, as I examined the wall, a complete evolution was noted.  Some bricks, like the above photo, had just nicks while other bricks were even more serrated than the ones we noted in Cadillac.

Now, lets look at this a bit deeper.

Are the bricks defective?  No. If so, the makers or the masons would have discarded them.  Note, too, that the mortar is in the cuts showing clearly that the bricks were serrated before they were placed in the wall (as opposed to some sort of chipping after they were placed).

Conversely, are the bricks somehow better?  No.  If they were, why don't all brick have these edges?  Sometimes, folks just blunder into better and it catches on. That does not appear to be the case here. Superior?  No.

Are the bricks decorative?  19th century masons certainly did things that make modern masons drool.  The effort was tremendous and final product was jaw dropping.  Clearly, jaw-dropping was not the intention here as the bricks were scattered about the walls at both Clam Lake and Stella's rather haphazardly. They are not structural (beyond their basic function) or decorative.

The only thing that makes sense at this point is that the edges are a function of the manufacturing.  Frustratingly, if you count the nicks, they are not uniform on individual bricks or among different bricks.  It seems to me if there was a flaw in manufacturing, the problems would be consistent, right? The effect is the same, but the numbers are not. Odd.

I pursued a few folks regarding these bricks.  A few folks in the Historic Preservation department were stumped.  Bob, a former co-worker, collects bricks.  Yeah, I'll say that again - he collects bricks. After all, there are people who collect just about everything, right?  Apparently his basement has a collection with hundreds of samples from dozens of brick makers across the country.   He was not sure of what to make of this situation either.

That said, he put the word out with his collecting network. He even did a small piece for their newsletter.  Perhaps they can turn something up.

In the meantime, I'll continue to poke around and see what I come up with...

There may be be mortar to this story.....

I thought it was great!